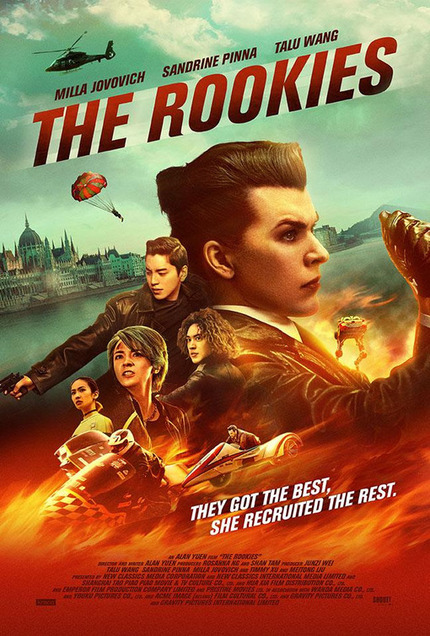 For its Western release, the advertising for The Rookies, including the trailer and poster, place longtime Resident Evil action-star Milla Jovovich front-and-center, towering over lesser, less significant mortals. In a film pushing the two-hour mark, Jovovich receives roughly 10-15-minutes total screen time. Disappointment will surely follow and not just for Jovovich’s hardcore fans. Anyone expecting even a modest respect for the rules of storytelling, character, or physics will find themselves on the wrong side of the disappointment divide.

Not that The Rookies needed to go that route, of course. After a gleefully ludicrous prologue inspired by Resident Evil and World War Z, including, but not limited to, CGI bodies running, flying, and falling against the laws of known science, The Rookies refocuses, introducing Zhao Feng (Talu Wang), a parkour enthusiast and social-media star, as he attempts a freestyle climb a glass-and-steel skyscraper. One inadvertent slip and safety parachute opening later and a surprised, shocked Zhao finds himself in the middle of a tense, high-stake meeting involving a cash-for-bioweapon trade that predictably goes awry, leaving newly aerated bodies scattered in a messy hotel suite after Bruce (Jovovich), the super-secret head of a super-secret organization, shows up to do her thing.

It’s not, though, a sign of action-related things to come. Far from it, actually. While Jovovich’s singularly named Bruce dispatches anonymous henchmen without breaking a sweat or getting blood splatter on her bespoke leather suit, she doesn’t show off her hand-to-hand combat skills again, instead stepping back, inexplicably recruiting Zhao as the newest member of her org, and giving him an equally inexplicable, high-profile assignment in Budapest involving the retrieval of the Holy Grail, a villainous, bearded billionaire, Iron Fist (David Lee McInnis), with a bizarre ocular fetish and a vaguely explained, logic-free plan to change the world, and the aforementioned ultra-dangerous bioweapon during a KISS-themed birthday party at an aristocrat’s sprawling, poorly secured mansion.

After touching down in Budapest, the maturity-challenged Zhao reacts to an apparent slight at the first meeting of Bruce's team by deciding to strike out on his own. Zhao recruits an old friend and serial gadget inventor, Ding Shan (Timmy Xu), Ding’s perpetually cheerful assistant, medic, and human guinea pig, LV (Meitong Liu), and Miao Yan (Sandrine Pinna), an emotionally unstable, minor Interpol agent with a hate-on for Zhao’s self-centered, narcissistic shenanigans (spoiler: It’s not really a hate-on, but a love-in). Zhao hopes to rescue the Holy Grail from the mansion hours before Bruce and her team does, setting the stage for increasingly frantic, farcical antics that rarely move the proverbial needle beyond low- to high-stakes. (The fate of the known world has never been duller or less suspenseful.)

From the get-go, Yuen embraces a broad, anime-inspired style that embraces chaotic, frenetic action and rapid-fire editing over everything else, including plot logic, narrative coherence, or three-dimensional characters. That leaves viewers with non-root-worthy characters, a derivative, convoluted storyline filled with head-scratching switchbacks, and wildly unmotivated character turns. To be fair, incredibly bad dubbing can and probably contributed to many, if not all, of The Rookies’s problems, though the constant, whiplash-inducing tonal shifts, along with Jovovich’s near criminal underuse, are ultimately all on Yuen and his collaborators.

The Rookies will open in select U.S. theaters and on-demand everywhere April 16, 2021.