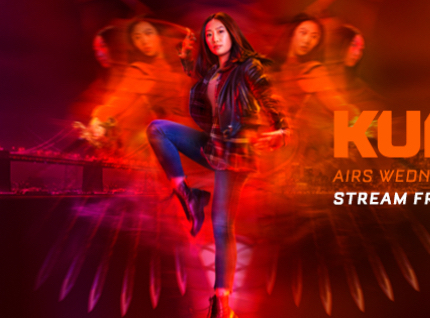 Kung Fu (2021)
New episodes are broadcast every Wednesday on The CW network via various basic cable packages. Episodes become available the following day exclusively on The CW, an ad-supported service.

Representation and diversity are vital elements in modern series that endeavor to reach as wide an audience as possible, and the new Kung Fu series certainly reflects these goals, though it can't entirely shake the feeling that it's a TV show about Asians who sometimes kick and punch their enemies, after pausing to meditate, and then realizing that they've learned yet another lesson in life.

This is The CW network, after all, an ad-supported service that propagates the idea that only beautiful people should be showcased, no matter their race or identity. Under the creative enterprises of Greg Berlanti, the network has specialized in making superhero shows that feature a number of underrepresented heroes and villains. The shows are quite watchable for what they are, fashioned for younger viewers (teens and early 20s) and surface a variety of personal and cultural issues that can be very effective.

Into this environment comes Kung Fu, based on the 70s TV show starring David Carradine and Keye Luke. Developed by Christina Kim (Lost, Hawaii Five-O), the show introduces Olivia Liang (Into the Dark: Crawlers) as Nicky Shen, who left her family during a trip abroad due to a personal crisis.

She spent the subsequent five years at a monastery in China, drawing close to her sifu until her mentor is murdered by a mysterious woman who then pushes Nicky off a cliff. Wisely, Nicky returns to her family home in San Francisco (US), intending to make amends for her past, unexplained disappearance, while also pursuing the killer of her sifu.

I've watched the first three episodes, which add brief martial arts fight scenes, discreet philosophy, and many Asian people to The CW's usual mix of highly-motivated heroes, supportive characters, villainous enemies, and dysfunctional families, with a dash of lighter moments, as well as a suggestive helping of romance. The formula is familiar, and it works well here -- probably because I haven't been watching The CW in several years -- because it's freshened up with new ingredients that have not been presented before.

As someone who watched the original series on television during his formative years -- and tried kicking and punching my shadow, quietly, like David Carradine -- it's good to see how the show has been updated, notably with an enlarged cast and an urban setting that allows for a greater variety of current and topical issues. It is not a show for viewers solely looking for dazzling fight scenes or enlightened discussions.

Rather, it's a wonderful showcase for a good variety of actors, including Tzi Ma, who plays the family patriarch with winning grace and becoming modesty. And it's far past time for Asian families to be represented in greater measure on screens both big and small.

For more information about the series, visit the official site.

Do you feel this content is inappropriate or infringes upon your rights? Click here to report it, or see our DMCA policy.
Christina M KimEddie LiuOlivia LiangThe CWTzi MaUS