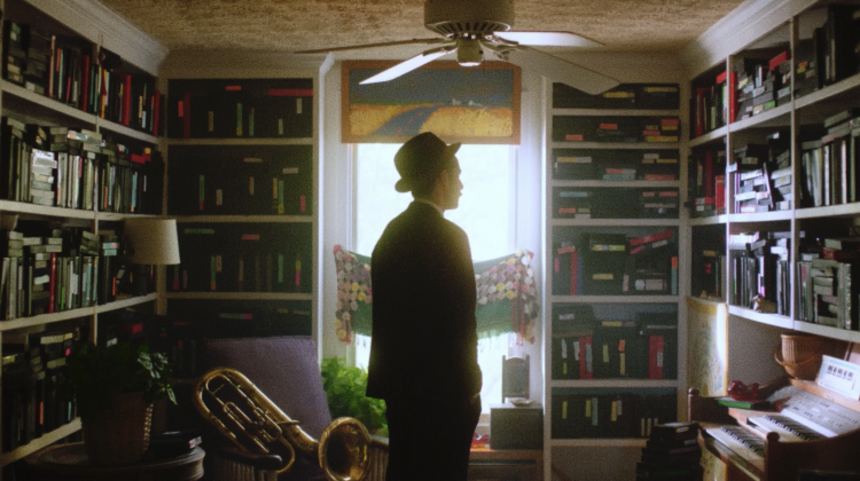 Work duties lead the dream tax auditor Pebble to a remote farmhouse, the titular Strawberry Mansion, where Arabella (Penny Fuller) lives. At the first sight, the aging artist seems to be delusional though Pebble attributes the strange behavior to the eccentricity usually associated with artists.

As it turns out, Arabella did not use the mandatory new-tech to record the night products of her mind and has a house full of a lifetime of dream VHS. Her warm hospitality welcomes the agent to stay at her home, room and board provided, until his task is done. He has to scan through all Arabella´s dreams and write up every object she dreamt of and did not pay tax for.

The premise makes Strawberry Mansion sound like one of the bleak dystopian stories about a totalitarian regime where G-men oppress common folk and get a kick out of it. And as a matter of fact, Birney and Audley´s oeuvre is a dystopian story set in a not so far future where an all-seeing surveillance state monetizes the unconscious lives of the populace. However, Strawberry Mansion is not bleak but rather a radiantly technicolor.

The story of the Orwellian future set almost entirely in the titular mansion (and Arabella´s dreams) glares with pastel-hued colors, soft lighting, and retro vibe courtesy of the cinematographer Tyler Davies. The nostalgic aesthetics place Strawberry Mansion into the sibling visual category of Greener Grass and Ham on Rye. However, similarly to the latter film, Birney and Audley operate the retro imagery purposefully employing the visuals as one of the story´s motifs.

The retro-futuro setting is less of an aesthetic oxymoron and more of a structural principle that the writing-directing team utilizes throughout the film. Birney and Audley wipe out the boundaries between analog and digital, real and imaginative, conscious and unconscious, dark and sweet, life and death as the Strawberry Mansion becomes a metaphysical romantic adventure, a niche where Orwell did not manage to venture. 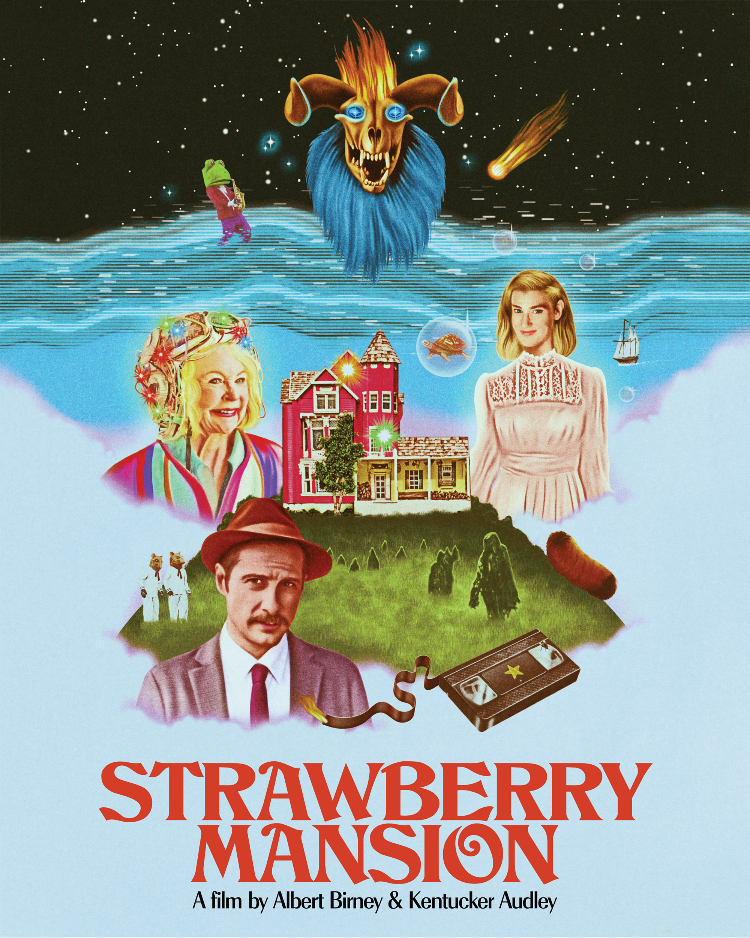 Arabella´s dreams exhibit a total freedom and playfulness that mesmerize Preble who is left locked a claustrophobic room with his dream buddy peddling products. As the dream auditor´s dreams remain loaded with product placement, he feels a stronger urge to dwell in Bella´s dreamland.

The plot thickens as Bella in the real life is in a possession of a weapon against adverto-capitalist regime while the young dream Bella (Grace Glowicki) appears to have more in common with the hapless agent. Preble soon becomes the victim of a conspiracy perpetrated by the family of Bella´s son, while dream Bella ends up being a hostage of a rather neglectful Blue Demon.

The film´s structural dichotomy tears the story into two parallel worlds and plotlines. On the outside, in the real world, Strawberry Mansion unfolds as a George Orwell meets Philip K. Dick dystopia. However, in the dreamland, it´s all a capricious adventure and unrestrained imagination of Karel Zeman meeting Jan Švankmajer.

As a matter of fact, Švankmajer´s 2010 feature Surviving Life (Theory and Practice) employs the same double plotline parallel unraveling in the protagonist´s real life and dream life (albeit with a handful of psychoanalytical quips). The Czech surrealist maestro appears to wield large influence over the film as several animated scenes evoke Švankmajer´s works and his unmistakable style.

Imaginative and frolicking, Strawberry Mansion brandishes a lo-fi nostalgia as an antidote to accelerated capitalism. As escaping and attempts to escape gradually grow into the film´s leitmotif, Albert Birney and Kentucker Audley find the answer in analog surrealism and unrestrained and innocent - Frog-Waiter-type-of - fantasizing.

Do you feel this content is inappropriate or infringes upon your rights? Click here to report it, or see our DMCA policy.
Sundance 2021surrealKentucker AudleyAlbert BirneyEphraim BirneyReed BirneyAdventure