Dallas Critics Go for NOMADLAND, You Should Too 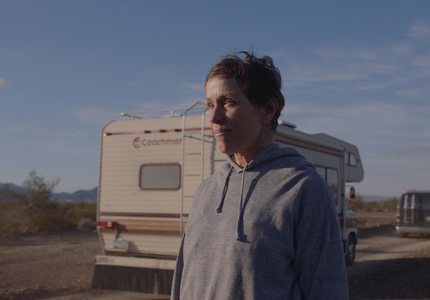 Awards for films are silly, I suppose, yet I am always happy to promote the awarding of recognition to films like Nomadland, which was recently recognized by the DFW (Dallas/Fort Worth) Film Critics Association as Best Picture of 2020.

I am a DFWFCA member, so this has given me the opportunity to reflect upon all the films I've seen from the past 12.5 months, during which time I did not see a single film in a movie theater, a fact that I will always regard with much sorrow and regret. Like most of you reading this, I stayed home rather than risk infection, or spreading infection, and so my viewing habits were confined to films that were made available to me as a film critic, as well as films that have been made available as a member of the public on the various streaming services over the past year that I pay for.

Recent economic belt-tightening and also a recent temporary, though debilitating, physical condition has prompted me to reflect even further on the films that I choose to watch. More than ever before, I am less inclined to spend time on films that do not appeal to me personally, and more inclined to revisit films that I've enjoyed in the past. (I was rather shocked, however, to realize that my viewing of non-English language films has declined over the past year, which is disconcerting, and I am resolved to remedy that.)

Back to Nomadland and our critics group awards. Our own Shelagh Rowan-Legg wrote a very fine review of the film when she saw it in connection with the Toronto International Film Festival last fall, noting in part: "Starring Frances McDormand in a career-best performance (and I do not say that lightly), it's a deeply profound look at those who have found a way to survive at the edges of a society and economy that considers them disposable. It's both a love letter to that community, and a searing portrait of people abandoned by the economy which is built on their sacrifice."

The entire review is beautifully written and contemplative. I was moved by the film's content and touched by McDormand's empathetic performance. Chloe Zhao is an extraordinary director; she knows how to get out of the way and elegantly construct an inviting road that beckons the viewer to travel upon it and savor the experience. More information about the film's upcoming theatrical engagements can be found at the official U.S. site. It will also be available the same day on the Hulu streaming service.

Below you'll find a complete listing of the DFWFCA award winners and runners-up. I've been able to see the vast majority of these films over the past 14 months; I wish I'd seen them in a movie theater, but, alas, that will have to wait. Please consider the following as a modest checklist for recent, (mostly) American films; I recommend everything here, wherever you can enjoy watching legally and safely.