The visual technique alone is worth the price of this Criterion blu-ray, and should be studied by filmmakers and cinephiles. 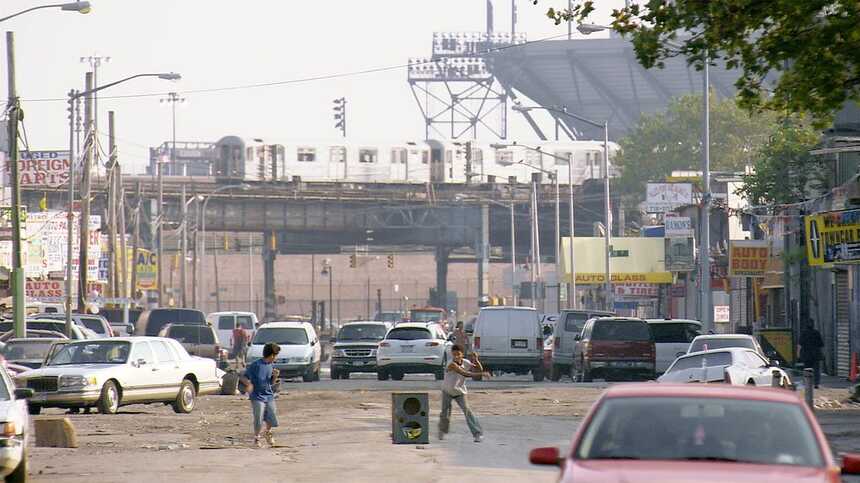 Filmed in 2006 in Willets Point, Queens, with a cast nearly entirely built around non-actors (only one performer had been in a film before, and he was the lead in director Ramin Bahrani's previous feature, Man Push Cart -- also arriving from the Criterion Collection today), Chop Shop succeeds where many films like it have tried. It's difficult to pull verisimilitude out of live locations and inexperienced actors, and have it feel like... well, like a movie; with a point of view, and a precision about its narrative and its images.

Chop Shop does all this and more, and watching it for the first time this week (as it arrives in the Criterion Collection at spine #1067) was startling. I had seen some of Bahrani's later films but none of them had prepared me for this skilful level of construction within a milieu that is designed to seem completely arbitrary.

The film follows Ale (Alejandro Polanco), a 12-year-old living by his wits in Willets Point. He makes money any way he can. He sells candy; he steals hubcaps. In the triangle of low-rent auto body shops in Willets Point, he earns five dollars every time he directs an incoming vehicle to the chop shop that belongs to Rob -- a no-bullshit mechanic and definitely-not-a-father-figure. Rob has, however, also given Ale a bunk in a small cubby above the garage.

Polanco was found by Bahrani at a local school search. Everyone else in the film is actually exactly what they appear to be, a person working in Willets Point, including Rob -- but it's the casting of its 12-year-old star that anchors the film.

He's terrifyingly young; his voice hasn't broken; his frame doesn't carry an ounce of unneeded fat. Against this image, Ale's persona is impossibly mature: he's a born hustler, a perfect salesman. He can think his way into and out of any problem, and a lot of the film is bound up with watching Ale consider his next move, and then make it.

Once he's found his makeshift home at Rob's, Ale invites his older sister, Izzy (Isamar Gonzales), to come stay with him. She's sixteen, also living on the streets, refusing early on to consider going back to any foster homes. She's lighthearted where Ale is grave, and -- paradoxically -- childish where her younger sibling is mature.

The relationship between Izzy and Ale is complex and, I think for both parties, a bit confusing. Ale -- forced to model manhood in spite of being much too young for it -- vacillates between irksome younger brother and man of the house; when Izzy hangs out with a bad-influence friend or starts drifting towards sex work, he becomes like a vengeful boyfriend or strict father.

It's an unsustainable dynamic, forced on the pair by their circumstances, and yet at the core, both children are tender and vulnerable with one another in a way that I've rarely seen onscreen. Polanco and Gonzales are both excellent, occasionally uncanny, in caught moments. As they get caught up in a scheme to buy a food truck and operate it themselves, the weight of our adult understanding pushes against their naive hopefulness with a dark poignance.

From the Criterion Blu-ray's special features, I learn that all of the actors' performances were constructed around a draft of the script, which was workshopped by the cast extensively before filming began. (Video of two of these sessions are included on the disc, for reference.) This allowed the non-professionals to grab hold of the overall intentions of scenes and sequences, transform some of the language into their own words, and then memorize it.

Then, on location, they shot it for real -- including in the moist bunker above Rob's garage, which really was above Rob's garage, and was (almost) as cramped and hot as it appears on film. (In the commentary track, recorded in 2006, Bahrani and his cinematographer Michael Simmonds allow that they expanded the back wall of the room to allow space for the camera... by two feet.)

That commentary also features Polanco as a 12-year-old, which reflects nicely against a video conversation recorded in 2020 that features Polanco now. Gonzales, unfortunately, is missing from both, and would have been a valuable addition.

Also missing -- though I've no idea how Criterion, or any other publisher in the world, would do it -- is some sort of record of Bahrani's shot-by-shot examination of the film with Roger Ebert at the University of Colorado in 2009. I'd have loved to have been in that audience, because it's Bahrani's visual command of Chop Shop that ultimately brings it together and elevates it above other direct cinema-style offerings of its ilk.

The visual density that Bahrani layers behind Ale as he works his way down the throng of cars in Willets Point is purposefully, industrially claustrophobic; the seamless interplay of camera blocking and character movement in unassuming scenes is complex, yet invisible. Chop Shop is a real work of visual dexterity by the director, all while maintaining a guise of simple, unornamented documentation.

The film has stuck with me. I think I will return to it a few times this year. It hasn't aged, and I don't think it's going to; it feels completely contemporary within an America that is perpetually presenting hustles and side-hustles as the first few rungs of the ladder of the Dream. That idea is so deep in Ale's core that I don't think he could ever understand to question it. Get the cash, get the food truck, get rich. Simple, right?