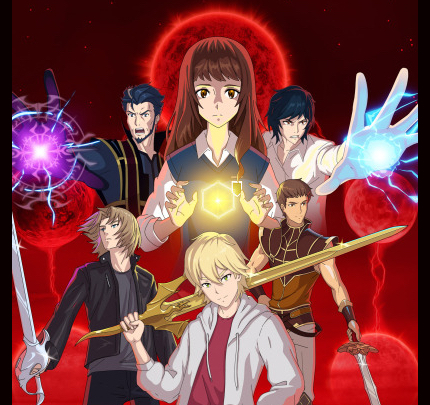 The Idhun Chronicles
All 10 episodes now streaming on Netflix.

The conclusion of the first -- and, apparently, the only -- season of a Spanish-language anime adaptation of Laura Gallego's book series left me feeling melancholy.

The first five episodes debuted on Netflix in September 2020. As I noted at the time: "It's filled with fantasy adventures featuring human characters, as well as more magical beings and creatures, and it's consistently diverting and entertaining." The remaining five episodes were added to the streaming service a few weeks ago (January 8), and bring he action quota down a bit because they concentrate on the unlikely romantic triangle that forms between the lead characters.

To recap, a young man named "Jack is transported magically to a world that is located somewhere between Earth and another planet where Evil dwells. Here is where Jack meets Victoria who, like him, has been transplanted to the planet called Idhun, for reasons that she does not yet fully understand." The two of them came up against Kirtash, a powerful yet alluring assassin who has been charged with murdering Jack and Victoria so they can no longer pose an obstacle for Kirtash's master, an incredibly powerful necromancer named Alsan who wants to rule the universe.

Picking up the story a couple of years later allows Jack and Victoria to display an even more grown-up appearance. But the relationship that seemed in the offing for them never materialized due to Jack's shy nature, and so Victoria begins to respond to her attraction to Kirtash, even though, er, he's supposed to kill her.

The final five episodes look as good as the first five episodes, which makes it easy to watch. Frankly, however, even though it's a short run, my attention wandered due to the narrative's lack of urgency. The three leading characters talk a lot as they contemplate how to achieve -- or, avoid doing -- what they know they need to do, or feel compelled to do.

I binged the five episodes over two viewing sessions, and found it fairly enjoyable, though not essential. I wonder, though, to what extent I was influenced by the series' (apparently) European (or, more accurately, Spanish) melodramatic sensibility. The emphasis skews heavily toward feelings rather than actions, which puts the series as a whole on a separate shelf from other anime series that I've watched, in which the action sequences usually get the priority.

I suppose it also depends on how the series has been marketed as an action series. Really, especially in this second half of the season, it's very much a melodramatic romance show with some action thrown in to spice things up and raise the stakes for personal consequences. There's nothing wrong with that in itself, it just played with my expectations by not providing what I was expecting.

On the plus side, the show is different from the other anime shows on Netflix, so: different tastes for different viewers is always a good thing, as I sometimes say.

By the way, I watched the series in the (mildly) controversial Spanish version; if you're interested in the English dub, the trailer below offers a sample.