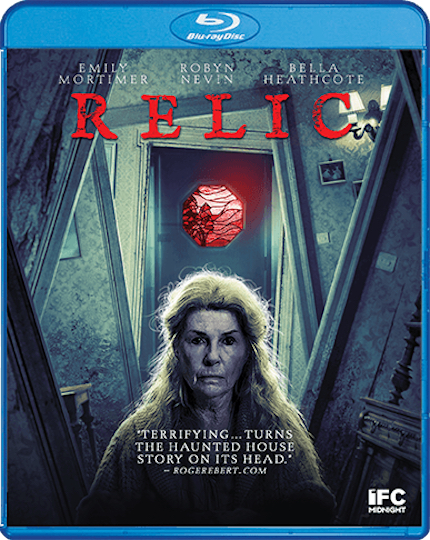 I've said it before and I'll say it again: horror works best as metaphor. When examining societal, personal, or political issues (or a heady combination of all three, mmm delicious), the horror genre is like no other. Sci-fi comes close, but in my opinion, you can really explore a ton of amazing emotional and societal territory in horror, specifically with visual metaphors.

Out this week in America from Shout! Factory's Scream Factory imprint, Relic is now available to have and to keep, preferably stored in the psychological horror section of your home library next to similarly-themed, family terror films such as The Witch, The Babadook, and Hereditary.

Without giving anything away, James uses visual metaphors to explore the issue of growing older. Specifically, Relic is a reflection lensed through horror on the unique terrors of dementia and Alzheimer's Disease.

How are we to help our loved ones who have become dangers to themselves and others? How can we treat them with kindness while we get on with the impossible, yet necessary task of getting on with our lives?

This issue is a worldwide issue that touches every culture. Relic is a worthwhile allegory that investigates the emotional and logistical troubles that are inherent in growing old. James and her team are up to the challenge; the cinematography, production design, acting, music, and sound design are all excellent.

While we all grow old, t's not lost on me that James and her co-writer chose to focus on three generations of women, and these actors have a lot to work with, and they're very, very good at what they do. Emily Mortimer, Bella Heathcote, and Robyn Nevin star as the women of one family trying to navigate the terrors of age.

I won't go into the plot too much, which I consider to be a bit thin. (You can read Shelagh's original review for the film --- as well as check out James' excellent short film Creswick here.) I will say that it's what James and her team do with the plot and story that make Relic great. (You may notice that the Russo Brothers and Jake Gyllenhaal are producers, and that NBC's Hannibal composer Brian Reitzell are on this mighty team.)

As for the image and sound on the Blu-ray copy I received, they're both wonderful. What isn't wonderful is that the release is so bare bones. Surely this film deserved more.

I'd have loved to have seen James and her cinematographer and sound designer speak about the work they did in the film. A featurette or three. Anything. Instead, this is what we get as bonus features, in addition to the slip cover:

Anyway, Relic achieves quite a bit as a first feature, more than most, heralding a true talent in James. I look forward to what she does next and how she sharpens her directorial skills.

To order a Blu-ray or DVD copy of Relic for your home library (because streaming isn't always reliable), head over to Scream Factory here.

Do you feel this content is inappropriate or infringes upon your rights? Click here to report it, or see our DMCA policy.
Natalie Erika JamesChristian WhiteEmily MortimerRobyn NevinBella HeathcoteSteve RodgersDramaHorrorMysteryThriller