Nightstream 2020 Review: ANYTHING FOR JACKSON, Elderly Satanists Deal With Their Grief Very Poorly 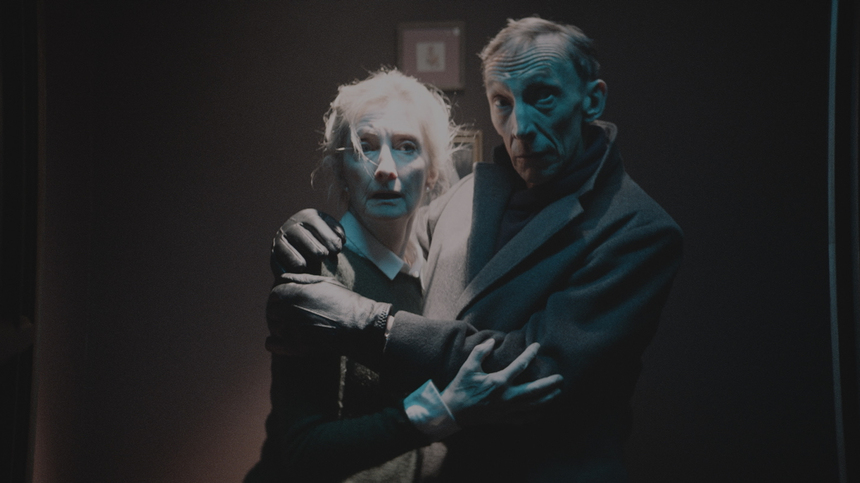 The loss of a child is one the most tragic experiences a person can endure, but the loss of a grandchild can be just as painful. The idea that a loved one who was supposed to long outlive you and carry your memory into their own happy future can be ripped away without warning can be tragic and painful. But what if you could fix things? What if you could reverse that horrible emptiness with a simple sacrifice? Not a sacrifice of your own, of course, but someone else, someone you don't really know or care about. Is trading their loss for your own gain worthwhile? For Dr. Henry Walsh (Julian Richings) and his wife, Audrey (Sheila McCarthy), it is worth the risk, but these things never quite go as planned, and what was supposed to be a simple trade turns pear shaped very quickly in director, Justin Dyck's Anything for Jackson.

Dr. and Mrs. Walsh are a cute elderly couple mourning the premature loss of their grandson, Jackson. Unable to cope with this trauma, they've joined a local Satanic coven in an attempt to find a way to bring him back with a little bit of help from the man downstairs. Henry's job as an OB/GYN provides him contact with hundreds of pregnant women, into whose unborn child they can transport Jackson's soul to be reborn, and as a trade, Satan will take the mother. One unplanned - and initially unwanted - pregnancy later, the Walsh's have their sacrifice, Becker (Konstantina Mantelos). A quick kidnapping later, they bind her to the bed in the guest bedroom and prepare their ritual, but it doesn't quite go to plan.

They enlist the help of fellow coven member, and committed Satanist, Ian (Josh Cruddas) to help complete the ceremony, but he has designs of his own once he realizes the kind of powers he is dealing with. Ian initially agrees to help as kind of a lark, but his surprise at the fact that all of their machinations seem to actually be working flips a switch in him that leads the couple down a much darker path. Their naiveté combined with his malevolence turn what seemed like a simple trading of souls into something much more dangerous.

The emotional core of this story is very easy to relate to, what parent wouldn't want their child brought back if they had the option? Dyck seems to be exploring the Kubler-Ross Seven Stages of Grieving model, of which stage three is anger and bargaining where anything seems preferable to enduring the pain of loss, the point where the grief-stricken would trade their own life for the return of those they've lost. It's a perfectly normal phase, after which typically comes the upward swing toward appreciation and hope. However, if you get stuck too long in this phase, which the Walkers clearly do, those other phases never come, and for them the bargains have become more elaborate and more about assuaging their own pain than finding a way to continue in the world without their Jackson.

Caught in the middle of all this is Becker, a smart young woman, soon to be a smart young single mother, who was initially hesitant to keep her child but who had grown into robust enthusiasm for her impending motherhood. Just as the Walkers are willing to do anything for their Jackson, Becker is equally determined to protect her baby, and so a battle of wills commences. Who is more committed to their child?

While this is Justin Dyck's first horror feature, it's far from his first film. Over the last decade he's credited with directing over two dozen TV films, mostly light comedies or the kind of Lifetime Christmas programmers that flood the airwaves every winter, so this is a huge change in direction for him, but he manages the transition pretty smoothly. Clearly a horror fan, Dyck navigates the expectations of a genre film audience effectively, delivering solid atmosphere and scares when it counts, though the scenes between the horror set pieces are a bit less impressively shot and suffer from a bit of the standard TV movie hangover.

The most recognizable face in the cast is easily Julian Richings, whose gaunt, drawn out features are instantly recognizable from any one of his hundreds of film and TV credits over the last three decades. However, for a familiar face whose IMDb page lists Urban Legend's "Weird Janitor" as one of the roles he's most well known for, nabbing a leading role like this one is definitely long overdue, and he makes the most of it. It is his co-stars though, McCarthy and Mantelos, who do the vast majority of emotional heavy lifting in Anything for Jackson. Their tete-a-tete moments alone in that bedroom, though largely devoid of action or violence, are certainly the most tense in the entire film.

Anything for Jackson woudn't be a horror movie without a few good scares, and Dyck and his team manage to cook up several creepy moments and some great monster FX. Though it seems at first that the only monsters in the film are the Walshes, it soon becomes clear that their Jackson is not the only thing aching to return from the dark beyond, and other nasty little things start making their presence known. These monsters, though often shrouded in darkness, are well executed and a couple manage to give me some solid heebie jeebies.

Dyck's ability to balance an incredibly dark sense of humor with the deeply disturbing emotional implications of what the Walsh family are trying to accomplish is commendable. Anything for Jackson is never laugh-out-loud funny, but there is a definite absurd comedy to the whole thing, which is helpful in maintaining a kind of tonal equilibrium that keeps the film from getting too heavy.  Though I was not ever truly blown away by Anything for Jackson, I did really enjoy it. It's a film that tries to address the emotional weight of grief and what we do to cope - or avoid coping - with those feelings. With ghosts. And monsters. I dug it.

Do you feel this content is inappropriate or infringes upon your rights? Click here to report it, or see our DMCA policy.
Justin G. DyckKeith CooperSheila McCarthyJulian RichingsKonstantina MantelosJosh CruddasHorror