70s Rewind: DEATHDREAM, Nightmares Are Made Of This 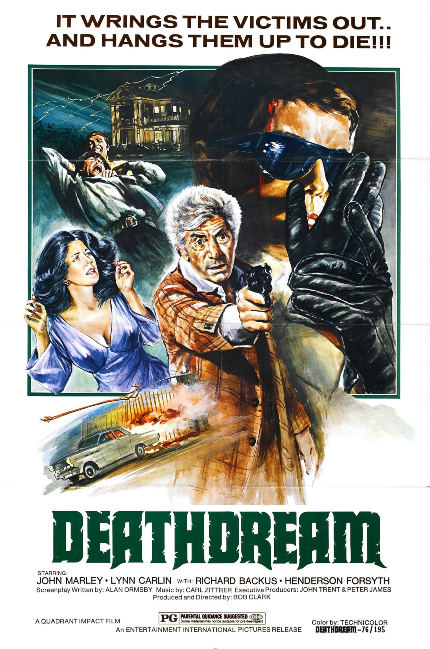 Deathdream (1974)
Now available to stream on The Criterion Channel.

Tapping into an existential dread bubbling beneath its superficial calm, Deathdream (aka Dead of Night) slowly, surprisingly, begins to jangle nerves.

In the thick of the Vietnam War and facing mortal danger in battle, U.S. soldier Andy Brooks (Richard Backus) desperately wishes he could go home. At the same time, his mother Christine (Lynn Carlin) is fervently praying for his return. Both requests are granted, but not in the manner desired.

Andy's family, composed of his strong-willed father Charles (John Marley), loving mother Christine, and kindhearted younger sister Cathy (Anya Ormsby), are crushed when a representative of the U.S. military arrives to tell them that Andy has been killed in action. Before they can properly process the heartbreaking news, Andy shows up at the front door.

What the family doesn't realize, at first, is that Andy is not the same young man who went to war. The dramatic change in his personality has already been vividly illustrated before he arrives home, and this becomes more and more apparent as he insists that no one be told that he has returned. As he withdraws further into his own personal shell, Andy becomes progressively more aggressive in his actions, which soon erupts in greater violence.

Like several other entries in The Criterion Channel's '70s Horror collection, Deathdream is roughly constructed from a visual standpoint. As a director, Clark would improve measurably with his next effort, Black Christmas (1974). He never became, primarily, an elegant cinematic stylist; he was, apparently, more interested in the stories that informed his films.

Alan Ormsby's script is filled with macabre ideas that puncture expectations. For example, Andy strikes out at victims that don't always make consistent sense; sometimes it's understandable, sometimes it's circumstantial, sometimes it's entirely random. His unpredictability makes him a threat that becomes more and more unhinged as things progress inevitably toward doom.

The dread comes drip by drip before widening into a river of anxiety, rushing past Andy and his family and their feeble attempts to comprehend, comfort, and confront the horrors that have possessed the hapless soldier, who went to war for reasons he did not fully understand, and returned home in search of a quiet peace.

Do you feel this content is inappropriate or infringes upon your rights? Click here to report it, or see our DMCA policy.
Alan OrmsbyBob ClarkJohn MarleyLynn CarlinRichard BackusThe Criterion ChannelUS