Toronto 2020 Review: GET THE HELL OUT, Adrenaline-Fueled Horror Comedy With Style to Spare 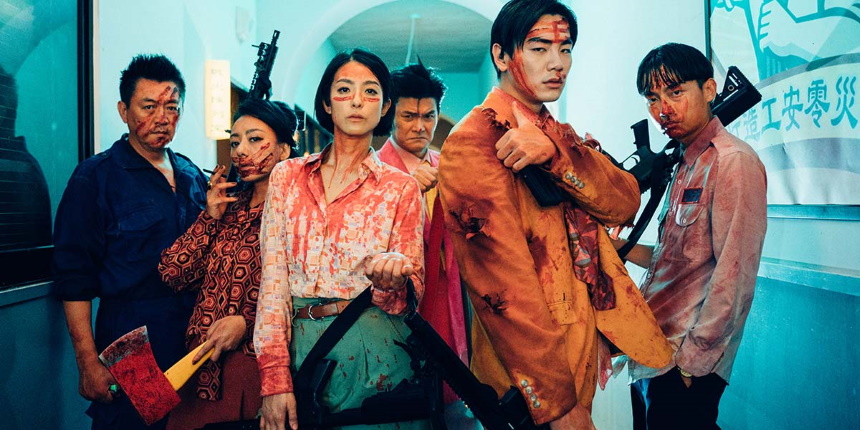 Hsiung Ying-ying (Megan Lai) is a legislator on the rise, her take-no-prisoners attitude puts her in good stead in Taiwan's notoriously antagonistic Legislative Yuan, where shouting matches over policy have been known to devolve into swarming brawls, often just for the sake of appearances. When Hsiung, in an adrenaline haze trying to literally fight her way to the floor, takes out meek security guard Wang You-wei (Bruce Hung) with a spectacularly executed suplex, the media jumps all over her ans she's forced from office for behavior unbecoming a public servant. Wang is quickly drafted to run for her spot, with Hsiung advising him on his campaign.

Far from completely selfless, Hsiung has an ulterior motive, she's trying to halt the construction of a chemical factory near her hometown that is rumored to be infested with rabid rodents. Her corrupt political rival, Li Kuo-chang (Wang Chung-wang), is determined to keep the factory on track, and is willing to sacrifice anyone he must to make it happen. As their clock counting down their political fight ticks down, things start to get weird, and bloody. A rabies like virus escapes on the Yuan floor and dozens of politicians are literally at each other's necks. The ensuing chaos will makes heroes of some, and lunch meat of others, and it's one hell of a fun time at the movies.

First thing's first, Get the Hell Out is silly. Very silly. While the reality of Taiwan's political process is wild by any rational standard, to call Wang's portrayal an exaggeration would be putting it lightly. However, what better basis for satire than an already ludicrous circus-like atmosphere? Wang takes full advantage of this and takes every chance to magnify the lunacy to comical proportions. The result is ninety minutes of non-stop madness, and even if silly isn't exactly your bag, there's hardly time to get bored as the set-pieces pile up on each other at an astounding pace.

Wang embraces the lunacy, taking from Southeast Asia's tradition of absurdly broad comedy to craft an effective horror-action-comedy hybrid that doesn't skimp on any of those three elements. Get the Hell Out is reminiscent of late '90s Stephen Chow when it comes to comedy, even borrowing some thematic elements from Chow's last directorial work, the delightfully daft eco-comedy, The Mermaid, in it's own plot. The horror comedy also has deep roots in this part of the world, with Wilson Yip's cult classic Bio-Zombie coming to mind for it's similar melding of the horrific and the hilarious, along with it's blistering pace. The most unique addition to this already impressive stew is Wang's surprising action sequences, which really put this one over the top for me.

Far from the traditionally choreographed martial arts action audiences expect from cinema of this region, or even the brutally chaotic survival horror of recent zombie films, Get the Hell Out's action feels fresh in this context. The close quarters of the zombie outbreak on the legislative floor presents plenty of opportunity for clever camera work, and cinematographer Seven Tsai is up to the task. Handheld close-up action shots bring the audience into the chaos, often leaving us feeling as though we've had the wind knocked from our own chests. Meticulously choreographed madness happens in a 360 degree arc, giving Tsai plenty of room to show off an impressive amount of teamwork between action directors, FX crew, actors, and the camera team.

Get the Hell Out's more culturally specific satire will fly right over the heads of a lot of viewers, and I'll admit there's very likely a ton that I didn't understand, but it manages to succeed on an entirely different level for fans of gonzo action horror. Undoubtedly the bloodiest, most hyperactive film at TIFF 2020, Get the Hell Out is a rousing good time with its tongue planted firmly in its cheek.

Get the Hell Out