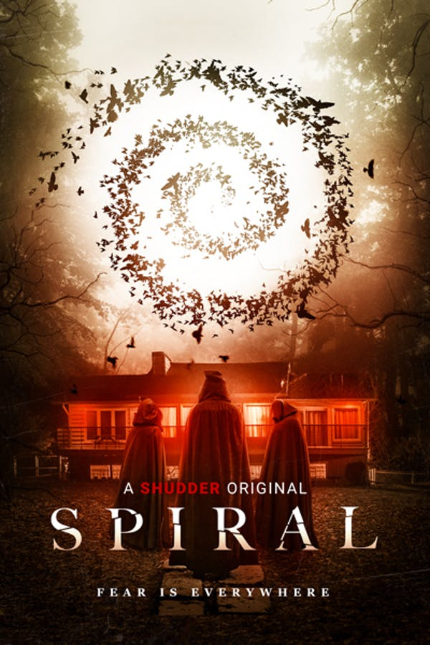 Maybe you're paranoid for a good reason?

Spiral
A Shudder Original. Now streaming on Shudder in the U,.S. as well as Australia, New Zealand, Ireland, and the UK.

Scene by scene, Spiral steadily builds a tale of mounting dread and terror.

Directed by Kurtis David Harder (Summerland), the original screenplay by Colin Minihan (Z) and John Poliquin (Selfie) begins as many horror films begin, with a love scene from the past that ends tragically, before moving forward to its main time frame, some ten years later.

Bear in mind, though, that 'the present day' in Spiral is 1995, which neatly eliminates the possibility of characters relying upon cell phones or the internet to deal with dangers that arise. Malik (Jeffrey Bowyer-Champion) and his husband Aaron (Ari Cohen) have left Chicago behind, moving to a small town -- still in the Midwest -- with their teenage daughter Kayla (Jennifer Laporte).

Kayla is 16 years old and is, naturally, resistant to the whole idea, but Malik and Aaron are happy about their new, gorgeous surroundings. Aaron heads off to a new job, while Malik settles into the drudgery of ghost-writing an autobiography for a racist white man. (Bills must be paid!) It's not long, however, before Malik senses that something is not quite right with the peaceful rural community.

For one thing, an older, white neighbor stares across the property at Malik without speaking. As a Black man in America during the 1990s, Malik is unhappily accustomed to ignoring such unwelcoming looks, but then he notices it again when he is on his morning run from more local residents. Is the overwhelmingly white town reacting to him by staring because he is Black? Or is it because he and Aaron are a same-sex couple?

Or ... could it be something else? The opening scene establishes that something was not quite right in the vicinity, and Malik's own past experiences suggest that something traumatic may be what is unsettling his present state of mind. For their part, Malik and Aaron's other neighbors, Marshal (Lochlyn Munro) and Tiffany (Chandra West), are a different-sex couple who represent the majority in town, though they are friendly enough to their new acquaintances.

Even so, Malik's heightened radar has been alerted, even as young Tiffany starts to make a new friend in Marshal and Tiffany's teenage son, Tyler (Ty Wood), and Aaron dismisses Malik's rising concerns. Soon enough, Malik finds himself alone as he deals with his increasing anxieties that may, in fact, have a frightening basis in reality.

Preying upon real-life traumas that stretch back decades, and even centuries in the U.S., set my mind alight, and the gradual uptick in the nightmarish atmosphere and tension became even more effective as the minutes pass. Describing Spiral as only a slow-burn thriller doesn't quite do it justice.

Something more is afoot, as Malik is about to discover.

Do you feel this content is inappropriate or infringes upon your rights? Click here to report it, or see our DMCA policy.
Ari CohenCanadaJeffrey Bowyer-ChapmanKurtis David HarderShudder