70s Rewind: Disney's THE RESCUERS, Fun for Kids, Diverting for Adults Too 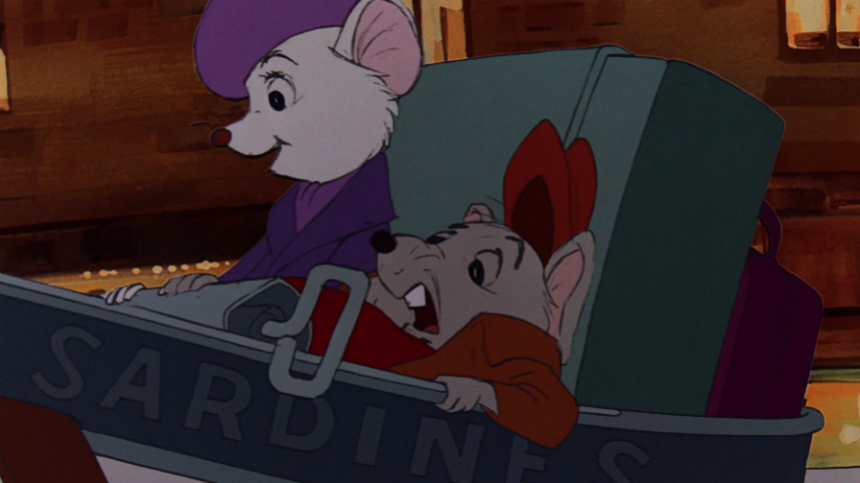 The theatrical release of Pixar's Coco, distributed by Disney, prompted me to watch The Rescuers (1977), a hand-drawn animated artifact that, it turns out, holds up quite well.

As many children of my generation did, I grew up in the 1960s watching Disney films in theaters, not just newly-produced animated works like The Jungle Book but also reissued classics like Bambi and Peter Pan. Yet my sense of humor was far more tickled by Warner Bros. cartoons that I watched every Saturday morning on television, becoming friends with the likes of Bugs Bunny and Porky Pig.

After watching Robin Hood in 1973, however, I decided I was too old for all things Disney. My adolescent self fully embraced Ralph Bakshi's Wizards when it opened in theaters in February 1977, and so I disdained even the thought of seeing Disney's The Rescuers, which opened in June 1977 and performed quite well at the box office. But, in my mind, it was for kids, and I was no longer a kid.

Coming to the film now means carrying a lot of baggage, not only about Disney and its animated ups and downs creatively, but also about the nature of animation. For one thing, the reported cost of making animated films has soared to somewhere around (or above) $150 million for Disney, which means appealing only to children is not enough. As a consequence, nowadays animated films aim to appeal to children and their parents and the young adult audience that comprises a majority of the moviegoing public in total.

But in June 1977, The Rescuers could afford to appeal primarily to children, who were often dropped off at theaters by their parents or adult guardians and left to their own devices for the length of the film. (Or, they made their own way to the theater; it was a very different time.) 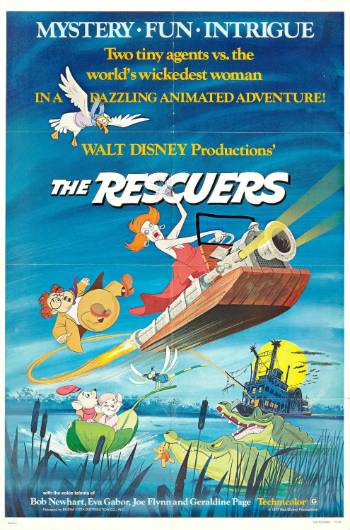 On a recent Saturday morning viewing via the Hulu streaming service, I was primarily interested in the beautiful hand-drawn animation. It's a style of art that feels comfortable and second-nature to me; whenever I see the imperfections, the smudges in the backgrounds, I somehow feel reassured by the confirmation of the human element.

I realize that may seem quaint to those who have grown up in the age of Pixar and I won't argue that it's superior to computer-aided graphic animation. Obviously, all styles of animation require an artistic sensibility to draw the viewer into the story, which itself needs to be strong enough to compel the viewer into watching for more than a few minutes, accompanied by characters who make the trip worthwhile.

The Rescuers has a good story about a orphan girl who has been kidnapped by the evil Madame Medusa (voiced by Geraldine Page) and forced to work as a slave in search of a valuable diamond. Two heroic mice, voiced by Bob Newhart and Eva Gabor, endeavor to rescue her.

Filled with diverting action sequences and colorful creatures, the humor is pitched for children and the danger always feels minimized for young audiences. But we never hear any obvious sort of potty jokes that detract from certain animated films today, and it's also absent any double-entendres that dot other animated products in desperate search of relevance.

Instead, it's a Disney film for the Disney audience of the time, and there's nothing inherently wrong with that. It's paced a touch slow by today's standards, but not any slower than acclaimed live-action films of the period, and, for adults, it's perfectly fine to have time to enjoy the animation.

It's also fun to consider that Don Bluth, who would soon leave Disney to form his own company and then make The Secret of NIMH -- as well as animate the video game Dragon's Lair, recently featured in Netflix's Stranger Things 2 -- made a big contribution to the film. Other notable animators on the film included Glen Keane, who later did gorgeous work on The Little Mermaid, Beauty and the Beast and many more, and Ron Clements, who would eventually direct The Little Mermaid, Moana, and others for Disney.

So, yes, The Rescuers is for children, but that's no reason to ignore it for 40 years if you're an adult. If there's one thing I've learned from writing this occasional column, it's that the most unlikely past candidates can sometimes become extremely pleasant new memories.

70s Rewind is an occasional column on titles from the writer's favorite film decade.

Do you feel this content is inappropriate or infringes upon your rights? Click here to report it, or see our DMCA policy.
animationBob NewhartDisneyDon BluthWalt Disney