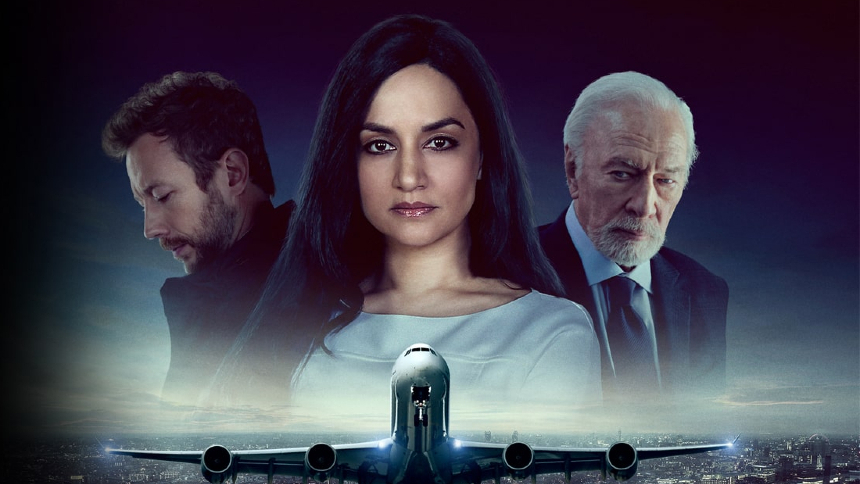 Manipulative to the nth degree, Departure is overstuffed with plot twists, character contrivances and desperate paranoia run rampant. It skirts the edges of believability, and then pushes past those boundaries in a deranged manner, almost as though the producers were trying to win a bet about the diminished attention span of modern audiences.

Created by Vincent Shiao (Ransom, Aftermath), with Malcolm MacRury (Saving Hope) installed as showrunner, and directed by T.J. Scott (Orphan Black, Star Trek: Discovery), the series plays like a bat out of hell that is being chased by very excitable demons. Broadcast on Global in Canada last year, all six episodes made their debut on the Peacock streaming service here in the U.S. earlier this week.

The first episode initially follows Madelyn Strong (Rebecca Liddiard), who seems to catch a break by arriving just in time for a flight on a packed plane from New York City to London. She is eager to see her beloved boyfriend Ali (Shazad Latif), but she soon sees her luck turn bad when things go very, very wrong on the flight and the plane simply disappears.

In London, Howard Lawson (Christopher Plummer), who heads the government agency charged with investigating airplane accidents, brings ace investigator Kendra Malley (Archie Panjabi) onto the case, even though she is still recovering emotionally from an automobile accident in which her husband died. Time is of the essence, of course, and pressures are quickly revved up when talk of terrorism rears its ugly head.

Kendra is partnered with Dom (Kris Holden-Ried), who was previously in charge. Meanwhile, Kendra must also deal with fall-out from her stepson AJ (Alexandre Bourgeois), who is still at the 'anger' stage of mourning his late father, as well as bureaucratic in-fighting with the skeptical Janet Friel (Claire Forlani), brought on from MI5, as well as Howard, who keeps pushing for quick conclusions to be reached.

So many plates are spinning in Departure that it's inevitable that some wind up cracked and in pieces on the narrative floor, as the show races on to its next ad break. With each episode running about 45 minutes, the narrative rarely pauses to catch its break, but the actors wear very easily, even if their characters sometimes look like they are trying to dance a waltz for the first time.

In fact, the only character whose motivations are left in doubt is Claire Forlani's Janet From MI5, which is a shame, because I'd love to watch her play more on the dark side, but with sterling turns by Panjabi, Plummer (of course), Holden-Ried, and more, it all flies by very comfortably. Even if, at times, it felt like my intelligence was being assaulted, the plot twists back to assure: no, it's not you, viewer, it's the plot itself, which is kinda cool.

And, if you're wondering what Peacock might be, it's yet another streaming service with a mixed bag of goodies on offer. I sampled it a few weeks ago -- the ad-supported free tier was tempting -- and found myself becoming addicted, stepping up first to Peacock Premium, which still has ads but offers the service's Original shows for $4.99, and then to Peacock Premium Plus, which has no ads (with a few exceptions) for $9.99 monthly.

The service became available earlier this week on Roku, which means I could download the Peacock app for my Roku and watch the service much more easily on my TV. (Otherwise, I could only watch by streaming from my phone to a Chromecast device, which meant my phone had to double as an awkward remote control.) I much prefer having a dedicated app, which makes it much easier to relax when I want to relax. (Or maybe that's just me?)

What initially tempted me was the prospect of watching Hammer horror movies from the late 50s and early 60s, as well as all the classic Universal monster movies, dating back to the early 30s. Peacock comes from NBCUniversal, so many movies from Universal Pictures are included, which scratches that particular itch for me.

As always, your streaming itches may vary. I'm not as big a fan of all the old broadcast TV shows that are available on the service, but I've only just begun to dive deeper to see what other tempting offerings may await.