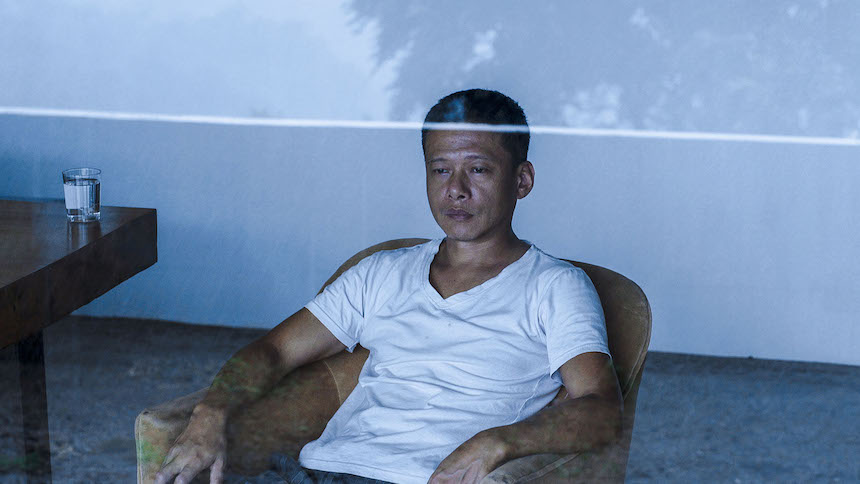 His output has been limited to short to medium length films, related to What Time is it There? (2001) and its sort-of sequel Wayward Cloud (2005), as well as various commissioned films, omnibus contributions and gallery installations, all of them starring his muse, Lee Kang-sheng. Personally, Lee was struck with debilitating health problems in recent years and Tsai documented his recovery over the years in various places. So it seems only fitting that the couple's new film would feature some of Lee's harrowing medical treatments. Days is also the most intimate and touching Tsai film in years.

The film consists of series of uncut long takes where a camera is stationary, except for certain scenes in the middle. It starts with Lee sitting on a chair looking out the window. The scene seems to go on forever. It is slowly revealed that he is in some sort of health rehab in the countryside. In the next scene, he is seen soaking in a tub motionlessly.

Next is wide shot of a squalid kitchen where a young foreign man (Anong Houngheuangsy) making a fish soup. It's the whole process from beginning to end. He cleans the fish, rinses vegetables, drains, starts a fire, gets the soup start, tastes it constantly as he puts more ingredients, lets it simmer while he goes in and out of frame, all taking before your eyes.

Next is Lee getting what seems to be an elaborate and painful acupuncture procedure. This long scene also consists of long takes but from different angles. It's an agonizing scene to look at; the treatment Lee is receiving is a combination of acupuncture, electro stimulation wired on the needles and moxa (burning of mugworms) on top of those needles. From the low angle in an extended period of time, we see both agony and ecstasy reflected on Lee's face. It is quite jarring as some of the moxa embers fall on Lee's skin and the pins catch fire near his face. This combo of agony and ecstasy turns out to be quite a theme in Days.

The next scene is Lee on neck bracelet, precariously supporting his head with his hand, walking down the busy Hong Kong street while onlookers glancing at the camera.

We see these daily routines of two characters separately as they go on. It is crazy to think that baby faced Lee is 50 years old now. In a series of unflattering close ups, you could tell the time has taken a toll. His gait also is not as youthful. He knowingly lets his ailing flesh to be recorded in a brave performance exposing his vulnerability out in the open for all to see.

After their intimate sessions, Lee gifts Houngheuangsy a tiny music box that the young man plays for a long time. They engage conversation in broken English over the noodles in a street market.

Portraying sexual intimacy and urban loneliness  are not new territories for Tsai, but its his acknowledgement that beauty is fleeting is something new in his oeuvre. This nearly silent film is both melancholic and tender. It's a deeply philosophical examination on human connections and the fleeting beauty of life.

The film is screening as part of the New York Film Festival. More information here.

Do you feel this content is inappropriate or infringes upon your rights? Click here to report it, or see our DMCA policy.
Anong HoungheuangsyFranceLee Kang-shengNew York 2020New York Film FestivalTaiwanTsai Ming-liang