L'Étrange 2020 Review: THE WITCH OF KING'S CROSS, The Soul of a Great Artist Laid Bare

When you are heavily involved in an art form, or maybe two, other art forms often slip under your radar, or you rely on friends' facebook posts to keep you informed, even with an artist you wish you knew about sooner. For me this year, that person will be Rosaleen Norton, whom I shamefully had never heard of until the documentary The Witch of King's Cross came into my hands. Australian filmmaker Sonia Bible tells the remarkable story of a gifted painter and artist, and daring woman, one who shocked the public in the mid-20th century, yet refused to compromise her life or her work.

To say that her life was astonishing is something of an understatement; to note that it's not really known outside of Australia, except perhaps to those more knowledgable of the visual art world, is shocking, given how important she is (or should be) with her work in the avant garde, with images of spirituality, feminism, and the occult. (Seriously, I hope someone is commissioning a biopic). Bible's film serves as a terrific introduction to this not-famous-enough yet important figure in art, feminism, and the occult. 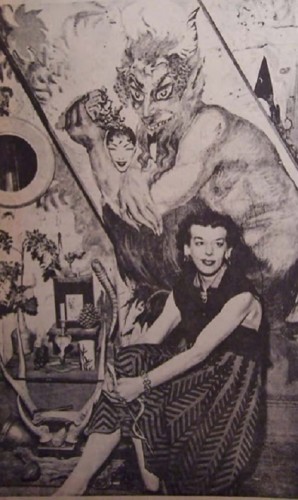 Norton grew up in a fairly mundane middle-class household in suburban Australia, but knew from an early age that she was different (she claimed to have been born with pointed ears, and marks on her knees that indicated she was a witch). She made a name for herself as an artist, though perhaps not the way she had intended, as her work was frequently called obscene, and she fully confessed to being a practicing witch (still illegal in 1950s Australia). The authorites had it in for her for many years, though even after numerous and serious charges, they were never able to make anything stick, and instead ended up giving her a lot of free publicity.

It's not an easy thing to put together what will be the starting point of many people's knowledge and understanding of Norton (though there have been retrospective showings of her art, and a biography). Bible assembles a nice variety of interviewees who can speak about Norton personally, such as old friends and her artist contemporaries - as well as those who knew of both art and the law at the time, and what her work meant then and now. Bible and her team have obviously done their research well, scouring for newspaper clippings, found hundreds of photographs, and pieced together the story of Norton's life in a way that is both thorough, and thoroughly entertaining (not an easy task with documentary). It helps to have a fascinating subject, one who lived life free from restraint, who was fully open about who she was and what she wanted, and worked to get what she wanted. Her friends offer respectful yet often deep memories and understandings of who she was, giving us the life of this woman beyond what a history book would impart.

Being how Norton's life and work was often distorted, misinterpreted, ignored, and reviled while she was alive, Bible also brings her own words into play, through readings of her writing, diaries, confessions, etc. This explores her practices in witchcraft, her romantic and sexual relationships, and the reasons why she refused to conform to societal norms in exploring her sexual and artistic potential. These readings are accompanied by dramatazations, with actors playing Norton and her 'muses: the god Pan, Lilith, and Lucifer, all of whom inspired her and to whom she dedicated her work ane herself. These scenes help elevate the documentary to another level: it makes the art, and the artist, part of the docuemtary in a real way; Norton is not just a subject to be discussed, but is part of the discussion, alive in her work and those who remember her.

The story of her life, the trials she experienced (both literal and figurative), and how she overcame it all while remainign steadfast adn true to her herself and her vision, is both riveting and inspirational. For those like me who knew nothing about her, this is a terrific overview, not only informative but provocative, shining a light on what women artists were subjected to, and how the occult was, and still is, treated, with its artists as outlyers and the true rebels of society. The Witch of King's Cross evokes the dark spirit of Rosaleen Norton, and you will half expect to find her watching next to you, waiting to beckon you into the delicious darkness with her.

Do you feel this content is inappropriate or infringes upon your rights? Click here to report it, or see our DMCA policy.
L'Etrange FestivalRosaleen NortonSonia BibleThe Witch of King's Cross