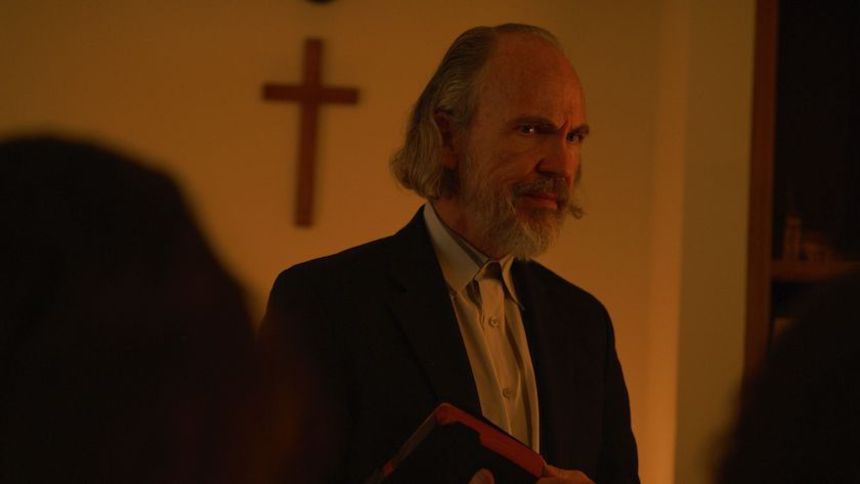 [Full disclosurei: The filmmaker and the film critic have a personal relationship and have worked together in the past.]

Marketed, more than slightly on the hyperbolic side, as the unholy offspring of Kevin Smith’s Red State and Sam Peckinpah’s Straw Dogs (spoiler alert: it’s neither), film-critic-turned-filmmaker Daniel Tucker’s feature-length debut, Nothing But the Blood, a religious-themed indie thriller long on ambition, but short on execution, a function no doubt of budget limitations, has more than few engaging, thought-provoking ideas for more forgiving, more patient, or inquisitive audiences.

As a standalone narrative film, Nothing But the Blood offers more than a handful of resonantly arresting images, emotionally charged scenes, and deliberately anti-cathartic violence. As the work of a feature filmmaker at the beginning of his career, Nothing But the Blood suggests Tucker has enough raw talent and skill that his next, hopefully, more polished film will be one to actively seek out and watch.

Nothing But the Blood opens promisingly enough with an emphatic Christian preacher known only as Father (Les Best), giving a typically fire-and-brimstone speech about heaven, hell, and sin to a small congregation. Tucker shoots the scene without cuts ― and in black-and-white, a decision that would benefitted the entire film, not just the prologue ― slowly pushing into Father’s face as he reads from the New Testament (specifically Judas’ betrayal) before turning into a rage-filled zealot decrying moral and spiritual degradation, specifically homosexuality, adultery, and children born-out-of-wedlock. Before Nothing But the Blood ends on a door literally closing on tableaux of menacing congregationalists, all three elements will come to discomfiting, distressing fruition.

Despite Father’s introduction in the prologue, however, he’s at best a secondary or tertiary character, stepping offscreen for minutes at a time while Nothing But the Blood focuses on Jessica (Rachel Hudson), a bitter, disengaged, small-market writer hoping to turn advance her journalism career by reporting on Father and the New Home Church he leads along with his “sons,” Thomas (Jordan O’Neal), a virtual screw-up who later confesses it’s all a money-making scam to the quickly smitten Jessica, and Michael (Nick Triola), a supposed true-believer and Father’s spiritual and earthly successor as leader of the church.

While Jessica, more-or-less a hardcore atheist and skeptic, peppers Michael with questions about the church’s previous activities (e.g., stoning a woman in another town for adultery, burning down the home of a gay couple), Michael responds with a not-unexpected defensiveness (i.e., “They deserved it!).

It’s not until Jessica and Thomas take their casual hookup to the next level, moving in together, living in sin by the church’s standards for their refusal to get married, and having a daughter out-of-wedlock (an antiquated idea if ever there was one), Arcadia (Aria Goodson), that Nothing But the Blood finally starts to increase the almost nonexistent tension and with it, the simmering suspense needed to carry the narrative for the last 30-40 minutes. In a decision that’s both perplexing on a character level, but apparently necessary on a story one, Jessica decides to make peace with Tom’s family and allow Arcadia to spend time with Tom’s estranged family, leaving the door open for a tragedy that propels Nothing But the Blood into the repeatedly promised but oft-delayed spurts of violence and blood, little, if any of it, cathartic and only semi-earned.

Nothing But the Blood tries to cram in so many ideas, many of them worthwhile, about religious fanaticism, patriarchal cults, and non-egalitarian values, that it rarely has time to explore or examine them in anything except perfunctory, superficial detail. The plot also drives the characters, especially Jessica, rather than character driving the plot, leading to awkward scene transitions and Jessica’s occasional head-scratching, non-organic decisions, ultimately leaving the performers to play scenes without the necessary scaffolding needed to deliver persuasive emotional dynamics or ground their characters’ moment-by-moment decisions.

Still, for all of its flaws, Nothing But the Blood shows more than enough promise to justify seeing whatever Tucker does next as a follow-up, hopefully something more restrained and more confined, but just as ambitious.

The film is now available to watch via various Video On Demand platforms.

Do you feel this content is inappropriate or infringes upon your rights? Click here to report it, or see our DMCA policy.
Daniel TuckerJordan O'NealNick TriolaRachel HudsonUS