Review: RAD, Bringing Back the 80s, One Bike at a Time 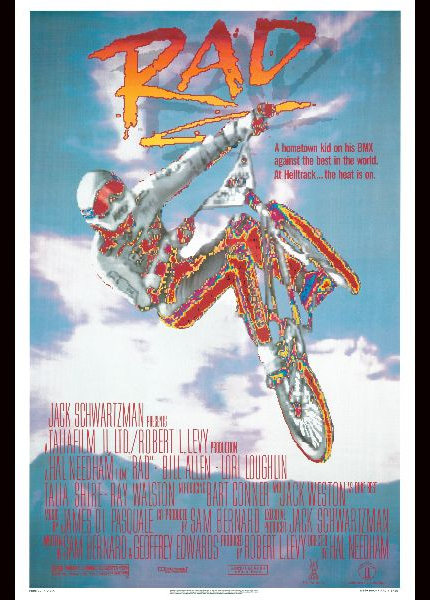 Whooshing and swirling with mad abandon, Hal Needham's teen flick is a blast of nostalgic joy. How did I never see it before?

The original U.S. theatrical release in March 1986 left absolutely no dent in my memory bank, but it's available now to watch and behold and ask oneself, 'Did people actually ever dress like that'? In a year that was already filled with the likes of athletic movies Youngblood (Rob Lowe, Canadian ice-hockey player), Quicksilver (Kevin Bacon, American bike messenger), and Wildcats (Goldie Hawn, American football coach), director Hal Needham's small-scale picture for teens also battled for attention with John Hughes' Pretty in Pink, which had arrived earlier and subsequently sucked up much of the younger audience, as I vaguely recall.

More discerning film fans may also point to Brian Trenchard-Smith's wildly entertaining BMX Bandits (1983), which clearly beat Rad to the punch by several years, but on its own merits, Rad stands up very nicely, thank you very much.

Filmed amidst gorgeous landscapes in Alberta, Canada, the small-town setting looks quite placid and peaceful, which only increases the itch for young Cru Jones (Bill Allen). His dear mother (Talia Shire) is convinced that college is his best option, but the high-school newspaper-delivery boy with a love for doing tricks on his bicycle cannot imagine any more studying in his life.

Instead, he yearns to enter a race that will celebrate the opening of Helltrack, a brand new, improbably named bicycle-racing course in a peaceful town. The townsfolk are excited, but the visiting BMX champion racers, brought in for promotional purposes, are bored out of their minds, except for Christian (Lori Loughlin), a comely lass who takes a shine to Cru. Can they do wheelies together as they search for happiness in a possibly shared future?

Really, the plot is just a means to get to the end of the story, and, working from a screenplay credited to Sam Bernard and Geoffrey Edwards, director Hal Needham knows this. He is respectful toward the actors, granted them many relaxed moments to inhabit their likable characters, and allowing veterans such as Talia Shire to create a warm and worried mother in a scant few minutes, while indulging warring businessmen Jack Weston and Ray Walston to enliven all their scenes together with juicy extravagance.

Bill Allen and Lori Loughlin make for a winning couple at the center of the picture, though the biggest stars of the movie are the stunt people who perform magical tricks on two wheels with great imagination. Stunt man turned stunt coordinator, Hal Needham made a popular debut as an action-comedy director with Smokey and the Bandit (1977), followed by the measurably much better Hooper (1978), but his skills limited what he was able to make in the years that followed, often hampered by sub-par narrative material.

Even so, Needham was always happy to showcase the daring, amazing abilities of stunt people, and that is abundantly in evidence in Rad, which is joined by a very pleasant group of actors in a picture that is well-paced and often jumps with joy.

The film is available exclusively on AltaVOD as of Friday, July 10, 2020, until it becomes available via various On Demand platforms on Friday, July 24. By the way, the recently-released, limited-edition Blu-ray from Vinegar Syndrome is now out of stock.