Now Streaming: TURKEY SHOOT, And You, My Friend, Are the Turkey 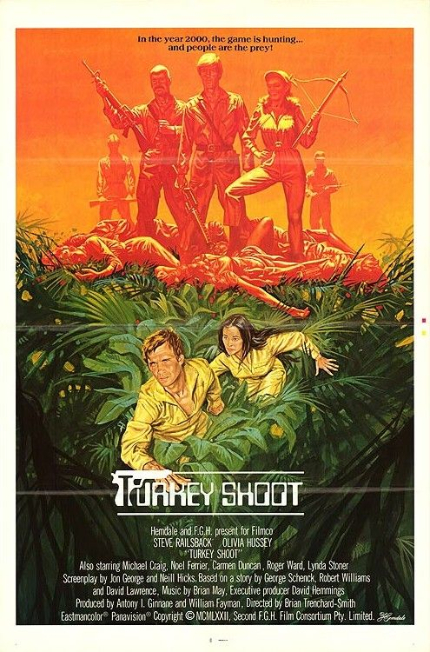 The movie is gloriously, riotously, and ridiculously entertaining, especially if you're in a certain, frustrating frame of mind and/or a fan of Ozploitation and/or locked in self-isolation.

Director Brian Trenchard-Smith visited Fantastic Fest in Austin, Texas, in 2008 to present two of his films on the big screen: Man From Hong Kong and Turkey Shoot.

As with many of the director's other films, such as Stunt Rock, BMX Bandits, and Dead End Drive-In, both Man From Hong Kong and Turkey Shoot are tremendously exciting and kinetic action pictures that hold up well to repeat viewings.

Steve Railsback (The Stunt Man) and Olivia Hussey (Black Christmas) star in Turkey Shoot as prisoners sentenced to a a re-education camp in a totalitarian country, where they are selected to participate in a human-hunting game for rich people. The kernel of the idea dates back to Richard Connell's story The Most Dangerous Game, first published in 1924, which has been adapted, officially or, most often, unofficially, for a slew of many action movies over the years.

Trenchard-Smith's version, however, obliterates all over in its outrageous elements, including blood, extreme violence, genuine anger, more blood, righteous anger, and more violence, but most of all a swaggering 'what are you going to do about it' verve. My answer, more than once in the past, has been simply: go with it.

Nowadays, I have no idea how it plays, but, nearly 12 years ago, it was a film that made me rise to my feet in celebration and appreciation for Trenchard-Smith's bold strokes and the muscular performances by all, including, of course, Olivia Hussey and, especially, Steve Railsback, who somehow outdoes his own impassioned role in Richard Rush's spine-tingling The Stunt Man, and perhaps equals his work in Tobe Hooper's Lifeforce.

Hmm, now all I want to do is watch a Steve Railsback marathon... Or, a marathon of Brian Tenchard-Smith's movies. Either way, I don't think fans of extreme movies can go wrong. And to read more of the director's view of the film and the forces that shaped it, be sure to check out Eric Ortiz-Garcia's expansive interview with the always eloquent and entertaining filmmaker.

Do you feel this content is inappropriate or infringes upon your rights? Click here to report it, or see our DMCA policy.
AustraliaBrian Trenchard-SmithMichael CraigOlivia HusseyShudderSteve Hussey