Fantaspoa’s tradition of paying homage to living legends of genre cinema, such as Lloyd Kaufman, Richard Stanley and Fabio Frizzi, continues in 2016 with a mini retrospective dedicated to fearless filmmaker Brian Trenchard-Smith, key figure of the so-called Ozploitation subgenre.

In part thanks to the likes of Mark Hartley, director of the Not Quite Hollywood: The Wild, Untold Story of Ozploitation! documentary, and Quentin Tarantino, who dedicated a Kill Bill screening in Australia to Trenchard-Smith, new generations are learning about the importance of this crazy wave of Australian cinema, which even had a representative this year at the Academy Awards in the form of George Miller and his brilliant Mad Max: Fury Road.

In conversation with Trenchard-Smith, this is what he had to say about Ozploitation, Mad Max: Fury Road, and both Turkey Shoot and Dead End Drive-In, the films Fantaspoa chose to celebrate his work.

ScreenAnarchy: How do you feel about new generations getting to know your work mostly after NOT QUITE HOLLYWOOD: THE WILD, UNTOLD STORY OF OZPLOITATION! and now with a homage like Fantaspoa's?

Brian Trenchard-Smith: I am flattered that a new generation recognizes my professionalism and sense of humor. The films of mine that have had recent Blu-ray releases are ones in which I both celebrate and satirize the standard tropes of the genre.

Vigilante heroes who cause carnage and massive property damage, as in The Man From Hong Kong; 1980's slasher/demon movies with catholic jokes and a Ninja Nun, as in Night Of The Demons 2; dwarf jokes, sexism, and black hearted laughs as in Leprechaun 3 and Leprechaun In Space; the fusion of 1984/ The Camp On Blood Island/ The Most Dangerous Game as in Turkey Shoot; the wry take on 80's youth culture in Dead End Drive-In; and so on.

Mark Hartley's Not Quite Hollywood documentary did a great job explaining why early films of mine dismissed by critics have been embraced by new young audiences who appreciate Not Quite Formula. It's an honor to be appreciated by Fantaspoa. 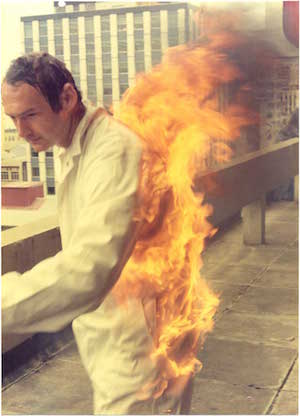 Ozploitation is also having an important new presence. What's your take on the remakes (PATRICK and the remake of your own TURKEY SHOOT), the current genre cinema from Australia, and last year's big reboot MAD MAX: FURY ROAD?

Although I am credited as an executive producer, I had nothing to do with the development or production of the remake of Turkey Shoot.

The reboot of Mad Max: Fury Road is nothing short of masterful. If George does another, I don't know how he can top this one. But knowing George, he won't do it unless he can. My thoughts on his achievement are best conveyed in Trailers From Hell.

Fantaspoa is screening TURKEY SHOOT and DEAD END DRIVE-IN from your very prolific filmography. Do you consider these films as the absolute essential to understand what you were doing back in the eighties?

Certainly Turkey Shoot and Dead End Drive-In will offer some insight into my movie persona. But I have multiple personalities.

Prevailing wisdom would dictate that the director of two Leprechaun movies, a pioneer of Ozploitation, would not be the right man to put at the helm of DC 9/11: Time Of Crisis, a docudrama based on official records about how President Bush and his cabinet reacted to the terror attack. But the then President of Showtime Jerry Offsay could see past the stereotype and enabled me to make a good film about that tragic event and how it reshaped US foreign policy. I am comfortable with any genre or any hybrid. I love cinema in all its forms.

It’s interesting that both TURKEY SHOOT and DEAD END DRIVE-IN are set in places that function as prisons (a drive-in and an island, respectively). Also, riots and a general sense of crisis are featured in both. What real-life events inspired you the most to explore these subjects?

Turkey Shoot was made early in the Reagan era. His Star Wars rhetoric had Australia frightened. Cartoons of him as Ronald Ray Gun were often spray painted on downtown Sydney walls in 1981. Margaret Thatcher similarly represented a regression to right wing conservatism. So Thatcher was an ideal name for the camp commandant. That choice really helped the movie's box office in the UK, further aided by an excellent campaign that reflected the dark sense of humor of the picture: "Turkey Shoot - No Film For Chickens." 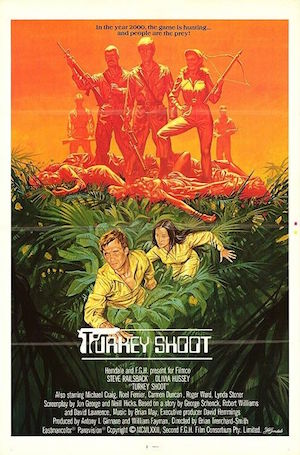 TURKEY SHOOT is the film that shows brutality towards the inmates. Were you hesitant to shoot such violent scenes as the one with the guard beating the young girl?

No I was not hesitant. I wanted the audience to experience authoritarianism at its most cynical and brutal. It is unexpected, shocking and darkly funny at the same time. It's Quentin Tarantino's favorite scene in the movie. At the premiere of HBO’s Norma Jean & Marilyn in 1996, I met QT, gave my name and he exclaimed: “You made Turkey Shoot!” He went on to list all the things he liked about the film, including: “I loved that scene where the Guard from Hell beats that girl to death on the parade ground while she tries to recite the dissident’s mea culpa.” Which he then recited verbatim! QT has amazing recall.

Where did the idea for the turkey shoot game came from and which one was the most memorable of the many death scenes?

It's one of my genre cocktails: 1984 meets The Camp On Blood Island and they play The Most Dangerous Game or The Naked Prey or Surviving The Game among a succession of hunt the humans derivatives (most recently The Hunger Games).

In my version the ruling elite of the corporate future put dissidents into Behavior Modification Camps. Corrupt bureaucrats and celebrities hunt them for sport. Violent action with political subtext and a vein of black comedy.

One of my more hilarious memories was the day we rammed Mutant Circus Freak Alf against a tree at the trouser-belt level with a bulldozer blade, then cut him in half. I wanted a shot of his bottom half wriggling beneath the dozer blade. I know. I'm a sick puppy. We built a duplicate section of the tree in which the actor - the late Steve Rackman, who played Donk in Crocodile Dundee -, could hide his legs while sitting on the bulldozer blade.

We had his separate trousers and boots filled with styrofoam suspended below the blade to be jiggled with monofilament. But we were running very short on prosthetics to simulate internal organs. We had eaten sausages and steak for lunch and there were uncooked leftovers and lots of ketchup, so everyone pitched in to fill the Traveling Pants with a convincing set of innards, and squirt individually designed trails of tomato sauce. Ah, the things we do for our art...

Unlike the prisoners in TURKEY SHOOT, the ones in DEAD END DRIVE-IN doesn’t seem to be interested in politics. Some of them even prefer to be inside the drive-in compared to their everyday life. Is this some sort of critic towards the youth culture of the eighties?

Dead End Drive-In is a story of what might happen after a major economic breakdown, sparking riots, mass unemployment, and a resulting crime wave. Authorities come up with a radical new idea to deal with youth crime. Instead of throwing criminals in prisons which are expensive to run, they requisition the drive-in movie theaters, and set them up to provide young offenders with all the junk values of their culture: junk food, junk movies, junk sex, junk drugs, all without adult interference. Let them create their own society in these drive-ins, so they won’t be out in the streets, mugging, burglarizing, or whatever. The kids accept their confinement because it's better that homelessness or living on inadequate government assistance. “Can't you see," says Crabs' girlfriend, "this is all we've got." 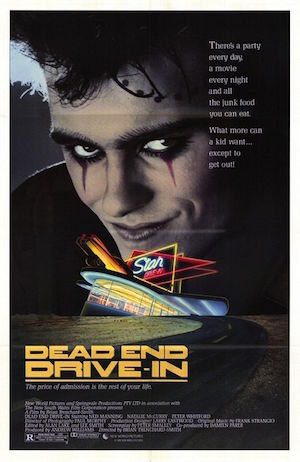 What do you think of the fact that the racism issue from DEAD END DRIVE-IN still feels relevant today?

Definitely. Those in society regarded as "other" are always the first to suffer discrimination in economic hard times. It's tribalism. We are seeing it currently in response to the refugee crisis.

In Dead End Drive-In, the government start shipping in Australia's unwanted Asian community, sparking angry demonstrations from the hitherto all white inhabitants. This was an element in the story I wanted to expand, but was unable to. The US distributor even edited some moments depicting racism from the finished film. They felt those moments would make their audience uncomfortable (surely a valuable function of art I would have thought) but there is enough of it left to make the point.

Several Ozploitation titles are notorious for their magnificent stunt work. Is the car jump and the general stunt work of DEAD END DRIVE-IN the one you are proudest of?

My 1970's films highlighted the contribution stuntmen have made to cinema. In the final stunt of Dead End Drive-In, Guy Norris jumped the police van an impressive 162 feet through a twenty foot neon sign, a world record at the time. His most recent work as co-ordinator and 2nd Unit director on Mad Max: Fury Road is extraordinary.

It's hard to say what stunt I am most proud to have staged. They all had their challenges. Much of my work in those early films was with Grant Page, another extraordinary stunt strategist and boundary pusher.

Perhaps the shot that still makes me tingle is in The Man From Hong Kong, where Grant glides his hang glider over a formation of Hong Kong police marching on the parade ground with fixed bayonets and lands perfectly a few feet away.

Fantaspoa screens Dead End Drive-In on Saturday, May 28 and Turkey Shoot on Sunday, May 29. Both screenings will be attended by Brian Trenchard-Smith.

Do you feel this content is inappropriate or infringes upon your rights? Click here to report it, or see our DMCA policy.
australiabrian trenchard smithdead end drive inexploitationfantaspoafantaspoa 2016george millermad maxozploitationquentin tarantinoturkey shoot