Now Streaming: PATRICK, It's All in the Eyes 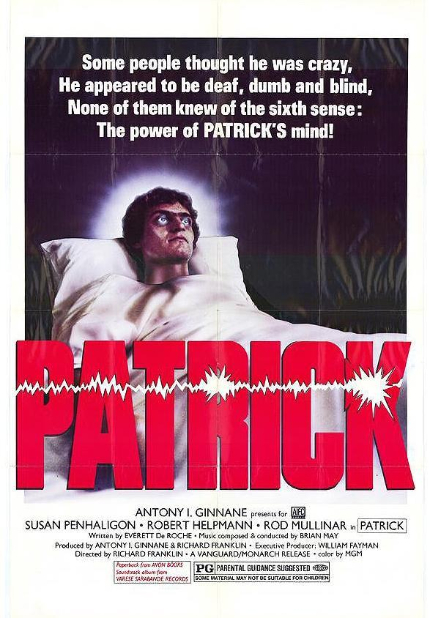 A nurse discovers that a comatose patient is not so comatose after all.

Richard Franklin's original Australian thriller elided my notice entirely when it arrived in the U.S. in the fall of 1979, though after the quiet, unsettling menace of his follow-up suspense pictures -- Road Games (1981) and Psycho II (1983) -- not to mention the broadly entertaining Cloak & Dagger (1984), I was eager to seek out Patrick a few years later at my local video store.

Written by the great, prolific Everett De Roche (Long Weekend, Harlequin, Razorback, Windrider, and on and on), the film first establishes that the titular Patrick is a very excitable boy, which leads to double murder and a long, long stay at a very special medical facility. Young nurse Kathy (Susan Penhaligion) arrives at the facility, begins caring for the comatose Patrick, and sparks fly.

Our own Kurt Halfyard wrote more about the film when it arrived on DVD back in 2008, so please read his review, wherein he writes: "Great cinematography, a full orchestral score, and top-shelf actors elevate the film beyond typical expectations this type of modestly funded effort."

Director Franklin and writer De Roche would collaborate again multiple times (the aforementioned Road Games, as well as Link, and the film would be remade by director Mark Hartley in a beautiful and often haunting version; our own Kwenton Bellette weighed in on that film in 2013 when it screened at the Melbourne International Film Festival.

I've seen the film two or three times over the years, and have always enjoyed the subtle pleasures that soak through the atmosphere, mood, twists, and turns. Watch out for those eyes!

Do you feel this content is inappropriate or infringes upon your rights? Click here to report it, or see our DMCA policy.
AustraliaRichard FranklinRobert HelpmannRod MullinarShudderSusan Penhaligon