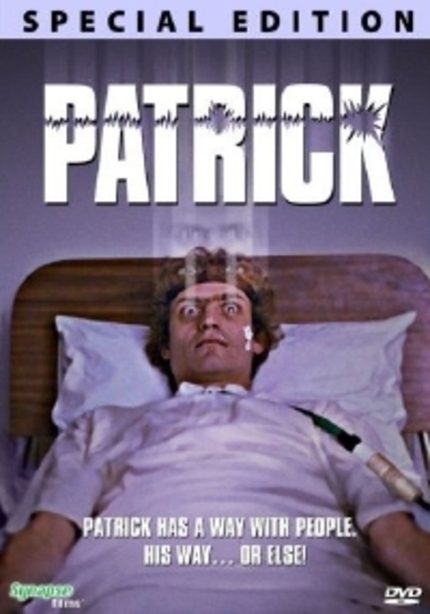 For anyone who grew up in the mid '80s Canada and saw those hilariously awful informercials, the phrase, "It's Patrick. He took out life insurance. Good for you, son!" might give you that warm and fuzzy nostalgic feeling. It is a feeling you probably will not find looking into Robert Thompson's wide and memorably creepy eyes as he lays comatose in a hospital bed. Patrick, a 1978 Australian Giallo influenced exploiter, features a fine pedigree behind and in front of the camera is neither warm and fuzzy or awful: It is quite the little gem. This is no small accomplishment when your villain doesn't movie, speak or even blink (outside of a pre-credit sequence) and is rarely even on screen. Thompson, despite being the title character and the source of almost all the creepiness gets a lowly 8th billing in the films credits. Great cinematography, a full orchestral score, and top-shelf actors elevate the film beyond typical expectations this type of modestly funded effort. In fact it is the somewhere in the happy middle ground between Alfred Hitchcock and Dario Argento. Not surprisingly director Richard Franklin came over to America shortly thereafter to helm a (perhaps ill advised) sequel to the very film that Patrick is echoing. He made Psycho II in the early 1980s and has been making guilty pleasures (Link, Cloak & Dagger and F/X 2) ever since.

One fine evening while trying to relax quietly at home, Patrick simply snaps on his mother and her boyfriend having raucous and vocal bathtub sex. What's a young man to do? Well, hurl a lamp into the water, for starters. The ensuing electrical mayhem leaves his mother and lover dead, and Patrick in a comatose state in the care of the Roget Institute, a private hospital for the mentally unstable and comatose patients for several years, before pretty young British nurse, Kathy (Susan Penhaligon) comes along as his care giver. During her job interview for the hospital she is grilled on her personal life, her views on sexual deviancy (lesbianism, nymphomaniacs, enema specialists...) and other taboo subjects by Matron Cassidy, a Nurse Ratched type played by Julia Blake (who is usually found in complex arthouse features directed by Paul Cox and here gets a chance to really have fun with this character). Kathy is subjected to a further mouthful of exposition by the good Dr. Roget on Patrick's comatose state, as he has Patrick as a state-funded research project on the line between life and death. Patrick has a lot of stuff going on in front of him while he is monitored 24/7 (trivia: he is the inspiration for Uma Thurman's scene in Kill Bill where The Bride lays comatose after her near-assassination) and his vacant motionless, broken only by the occasionally involuntary spitting nevertheless dominates the frame. And Patrick eventually falls in love with Kathy. How do we know this? Camera Angles, editing, and general movie grammar. And the film makes fine use of a type-writer as an effective tension builder and occasional communication tool. Meanwhile, Kathy has a lot of men on the go: her husband Ed, who she is in the process of separating from; her new boyfriend Dr. Brian, who serves the dual purpose of kind of an exposition-second-opinion to contrast Dr. Roget's crazier antics such as frog killing and electroshock therapy sessions. A number of pyschokinetic-style accidents occur to these men which leads Dr. Brian to postulate Patrick as a man who in the absence of the usual five senses has developed a pretty killer sixth sense. (After all, a man recently blind has the other four senses magnified to compensate.)

Patrick may not be as vicious or visceral as Scanners, Firestarter or Carrie, but more than those pictures it does have a very lived in texture. The characters seem like they have lives outside the context of the movie, and it makes for the creepy goings on and eventual climax (where Kathy has to choose a man while Patrick battles the doctors and nurses) have a bit more down-to-earth vibe than the usual horror picture. And then there is this strange rape metaphor running through the picture. Ed tends to come over to Kathy's place for the occasional bit of - we're trial-separated, but why not - love-making. During one such unsuccessful encounter Ed says "so much for the whole women rape fantasy?" This is mirrored by Dr. Roget's electroshock therapy on Patrick, the immobile body constantly tormented for his own good. There are no victims here though. Patrick eventually starts lashing out at the staff in violent ways, and Kathy fights back against the over-protective nature of the men around her (although she still manages to have sex with two, and 'handle' the thirds unit at one point. Who would have thought that a movie like would turn into feminist statement of sorts? Perhaps, that is too much over-analysis of a deliberately paced moody horror picture which telegraphs pyschokinetic activity by having the hospital "Entrance" sign flicker so that only "trance" remains lit. Nevertheless, Patrick is a treat and a cut above the usual exploitation fare and a fun romp - especially for those who like their horror films to have a little patience. It also reminded me greatly along the lines of something like the modestly produced Canadian creep-fest Pin. It beats taking the medical for dodgy life insurance. Good for you, son.