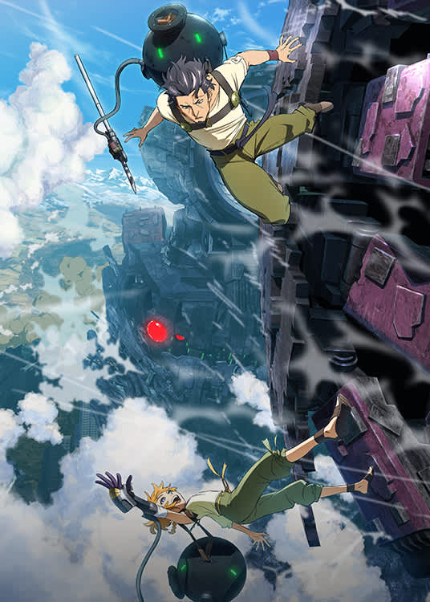 One episode in, I thought I knew what this show was all about. Boy, was I wrong.

Deca-dence
Now simulcast streaming on Funimation and on Hulu.

One year after I started my personal Quest To Understand Anime, I will be the first to admit that I still have no bloody idea, really, except that I love a few, I enjoy a number of others, some make me shrug my shoulders, and a few are so revoltingly smarmy that they make me want to wash my mind and body, post-haste.

And then there's Deca-dence, which drew me into its circle immediately with its inviting first episode, clear character motivations, and surging action scenes. Since I was late to watch it, I added it to my watchlist and made plans to watch it again before writing about it.

Now I'm even more convinced that it deserves more of my time and attention. The second episode completely exploded the conclusions I'd drawn from the first episode, and left me on the floor with delight, simply because it wasn't at all what I expected.

Directed by Tachikawa Yuzuru and written by Seko Hiroshi Seko, who previously teamed up on Mob Psycho 100, and produced by studio Kadokawa, the original anime series follows Natsume, a young human woman who has dreamed of fighting the alien creatures known as the Gadoll ever since her father was killed in action, waging war against the invaders. She has graduated school, but instead of an assignment as a warrior, she is assigned to clean the armored vehicles for five years under the oversight of the dead-eyed, weary and much older Kaburagi.

The first episode features terrific character designers and more than serviceable landscapes and background art, plus terrific extended battle scenes. Great! I thought, before picking up with the second episode -- only to discover that all my expectations were wrong. (Did I already write that? Seriously, I am drinking far too much caffeine these days.)

Anyway, I loved the second episode even more than the first episode, and hope that I will feel likewise after the next episode.