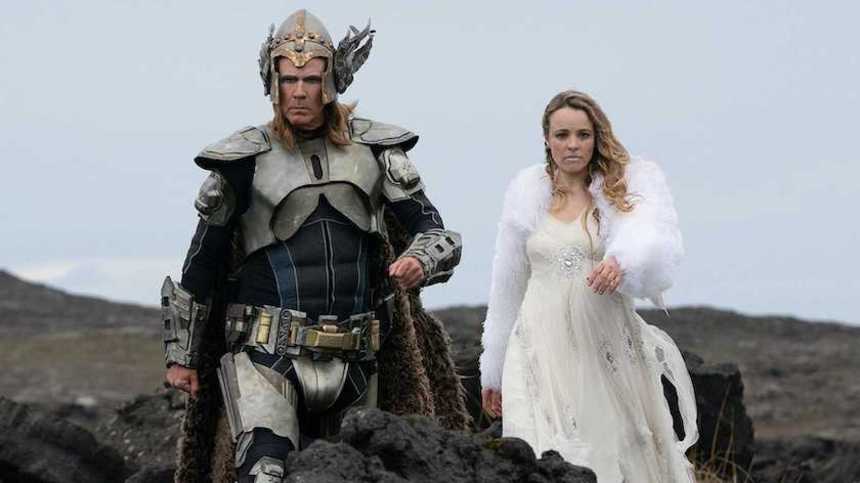 In the before times, Eurovision Song Contest: The Story of Fire Saga, a comedy directed by David Dobkin (The Judge, The Change-Up, Wedding Crashers, Clay Pigeons) and co-written by and starring Will Ferrell, a comedian who’s made a virtual meal out of playing a relentlessly high-energy, dim-witted man-child and buffoon, was all set to premiere with the 65th edition of the European Song Contest in May.

But with the pandemic raging and large-scale mass events a no-go for the foreseeable future — the competition was delayed an entire year — Netflix decided to forego any synergy that might accrue with the simultaneous release of Eurovision Song Contest: The Story of Fire Saga with the actual competition and stream Farrell’s musical parody now. They probably should have waited another year or, at minimum, released the equivalent of a theatrical cut now and save the bloated, overlong, over-indulgent filmmaker’s cut at a later, unspecified date.

Farrell’s character, Lars Erickssong (Will Ferrell), another typically sad-sack, semi-loner, and loser, dreams of not just entering the hyper-competitive Eurovision Song Contest (42 countries compete for the top prize), but winning it too for Iceland, one of the smallest countries in Europe (or really anywhere). Well past forty and with no other professional prospects in mind, Lars spends his days dodging insults from his perpetually disgruntled, curmudgeonly father, Erick (Pierce Brosnan), while all but ignoring the not-so-subtle romantic overtures made by his partner in musicianship, Sigrit Ericksdottir (Rachel McAdams). Sigrit has spent practically all of her preteen, teen, and adult life mooning for the undeserving, self-centered, egoistical Lars, ceding complete control of their band, Fire Saga, and by extension, her life, to Lars.

A series of contrivances, including one involving a fiery boat explosion, however, leave Fire Saga as the last band standing at Iceland’s version of the song contest, gifting Lars and Sigrit with the opportunity to make their dream of commercial success a reality. In Edinburgh, Scotland for the Eurovision Song Contest proper, Lars and Sigrit’s relationship comes under increasing strain, partly due to his ineptitude (he’s a walking catastrophe, more or less), partly due to the bright lights/big city aspect of Edinburgh, and partly (mostly) due to the machinations of Russia’s representative in the song contest, Alexander Lemtov (Dan Stevens), the apparent embodiment of the phrase “Euro-Trash”.  He sees something special in Sigrit (i.e., talent) that Lars, in all his willful blindness or ignorance, refuses to see or acknowledge even when the prospect of losing Sigrit becomes a real possibility.

Never the most subtle or nuanced of performers, Ferrell plays Lars as yet another caricature of masculinity with unsurprisingly diminishing returns. Ferrell the co-writer and producer, however, fares better when he turns his eye for parody to the Eurovision Song Contest itself. Anyone who’s watched even a handful of Eurovision performances knows, of course, that the contest often veers into camp and self-parody.

The songs tend to be negligible, over-produced, electro-pop concoctions or power ballads meant to highlight a particular singer’s vocal range. They’re also usually accompanied by a visual style that emphasizes pyrotechnics, often literally, over actual performances. Eurovision seems to operate with the “more is more” motto or “the more senses are engaged, the better” credo, giving Farrell and Dobkin the perfect opportunity to indulge their inner musical parodists.

Comedy wise, Eurovision Song Contest: The Story of Fire Saga contains the usual grab-bag of verbal humor and physical gags of varying, sporadic quality. A joke about the possibility of Lars and Sigrit’s sharing a father (it’s in their surnames) gets quickly run into the ground before eventually, mercifully petering out. Another running joke about Lars encountering proverbial ugly Americans (they’re not, he’s just biased against Americans) also wears out its welcome before it’s finally retired moments before the ten minutes' worth of end credits arrive.

Erick’s verbal mistreatment of Lars adds a presumably unintentional sour note to the film, but they’re partially offset by the general goodwill surrounding former Bond star Brosnan. The better jokes and gags often don’t involve Lars at all, but the parade of Eurovision performers (in one scene, actual winners from previous competitions) and their over-produced songs littered with nonsense lyrics in English and over-emphatic singing styles.

The journey for Farrell’s character follows a familiar arc, from self-entitlement and selfishness to self-awareness and the first stirrings of altruism and empathy (for Sigrit, if no one else). That arc gives Farrell little room to stretch or show more range than usual, though that’s completely intentional, not accidental. McAdams fares significantly better. While she plays the more obviously grounded character and straight woman to Farrell’s buffoonish Lars, she also shows off ace comic timing and mastery of the reaction shot (a must in the comedy genre), somehow managing to keep her faux-Icelandic accent intact.

If only Eurovision Song Contest: The Story of Fire Saga had been less about Lars’ redemptive arc and more about Sigrit realizing that her dreams didn’t begin or end with Lars, marriage, and a child of their own, but with recognizing her own talents as a performer and finding her own way without Lars or his baggage. That film, however, isn’t Eurovision Song Contest: The Story of Fire Saga. If it was, it would have been a far more engaging, engrossing, and entertaining film.

The film is now streaming on Netflix.