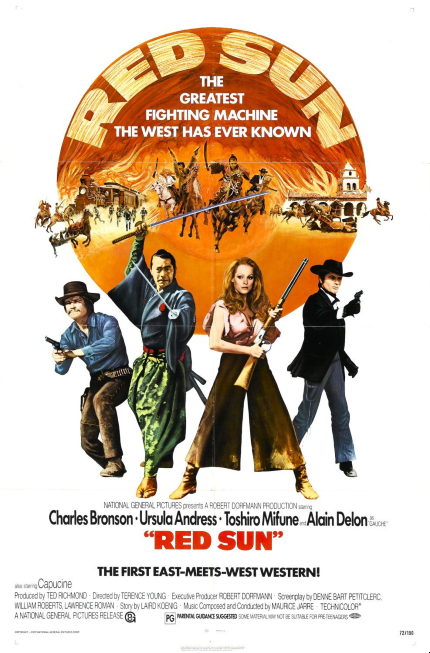 Actors from Hollywood and Japan meet in Spain with some very compatible Europeans.

Red Sun (aka Soleil Rouge)
Streaming on The Criterion Channel until June 30, 2020.

Red Sun reportedly originated with producer Ted Richmond, who'd heard about a "Japanese representative dishonored during a trip through the American West" and then made entreaties to Mifune Toshiro to star in 1966. That was the same year in which Mifune made his Hollywood debut as a supporting player in John Frankenheimer's Grand Prix before starring opposite Lee Marvin in John Boorman's Hell in the Pacific in 1968, the same year in which Red Sun was first announced, with Mifune attached to star.

Charles Bronson's career got a big boost into leading roles when he starred in Farewell, Friend (1968) opposite Alain Delon, followed by Sergio Leone's classic Western Once Upon a Time in the West (1968). That led to more European co-productions, including Guns for San Sebastian, Rene Clement's Rider on the Rain, Sergio Sollima's Violent City, and Terence Young's Cold Sweat (1970).

Gauche (Delon) steals a ceremonial sword, intended as a gift to the U.S. President, from the Japanese ambassador, which sets Kuroda (Mifune) on a path to vengeance, where he is joined by Link Stuart (Bronson), who has been double-crossed by Gauche and his fellow gang members and is committed to tracking down Gauche and reclaiming his share of the loot that has been stolen from the train.

Once Link and Kuroda team up, Red Sun becomes a buddy-Western, following a pattern that was widespread in U.S. film comedies in the 1930s and 40s before Kurosawa Akira's Stray Dog (1949), starring Mifune Toshiro and Shimura Takeshi, spun the idea into a new kind of dramatic police procedural.

Red Sun could be described, then, as the story of a couple (Bronson and Delon) that breaks up and how one of them (Bronson) deals with the pain by beginning a new relationship (with Mifune), while also pursuing a more satisfying resolution to the hurtful breakup. Bronson and Mifune tend to be taciturn, stone faced men who hide their emotions behind their actions, Their search for Gauche leads them to a brothel, where Gauche's girlfriend Cristina (Urusula Andress) works, leading to more complications.

The screenplay, credited to Denne Bart Petitclerc, William Roberts and Lawrence Roman from a story by Laird Koenig, is filled with incidents that allow as much gun action (for Bronson) and knife action (for Mifune) as possible. This is very much a 'manly Western,' typical of the period in that respect, so Cristina is a prostitute who is loyal to the elegant but otherwise untrustworthy Gauche, and Link's longtime friend Pepita (a Mexican character played by French actress Capucine) is only seen as a loyal and supportive prostitute.

Red Sun plays out as a curiosity that shows its age, but is redeemed by Terence Young's ability to stage effective action sequences and the twin starring performances by Charles Bronson and Mifune Toshiro, who are both more charming and display more natural chemistry than might be expected from two big action stars. 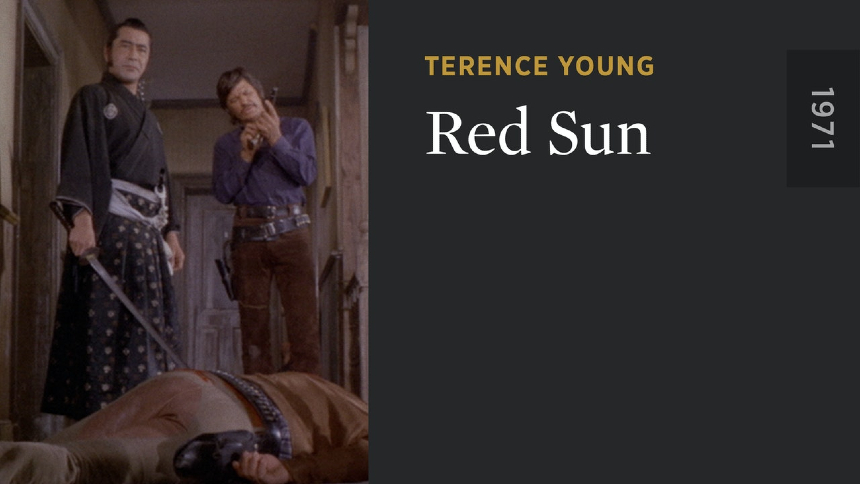 Do you feel this content is inappropriate or infringes upon your rights? Click here to report it, or see our DMCA policy.
Alain DelonCharles BronsonMifune ToshiroTerence YoungUrsula Andress