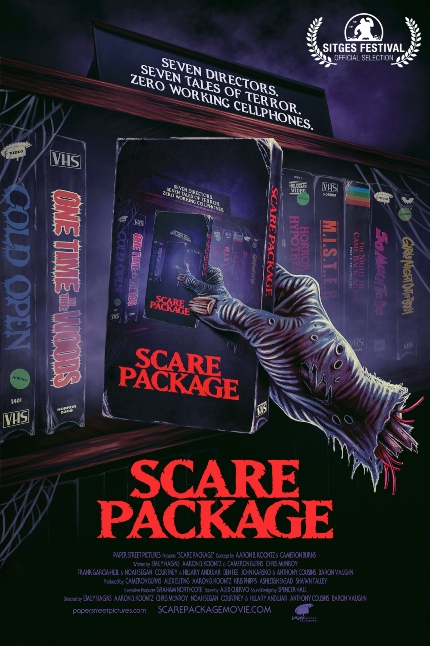 Horror stories lend themselves to being ingested in bite-sized nuggets, which means they are a perfect source for anthology films, which means Scare Package sounds very appealing, which means I want to see it as soon as possible.

Shudder has acquired all rights in its territories to the horror-comedy anthology and will premiere the film on its streaming service in the U.S., Canada, and the UK on June 18, 2020, which means that I have declared June 18 to be Scary Candy Day! (Not to be confused with National Fudge Day two days before that, on June 16.)

"Led by a diverse group of up-and-coming genre filmmakers, Scare Package features the directorial debuts of actors Segan and Vaughn. Emily Hagins (Netflix's Coin Heist), Anthony Cousins (The Bloody Ballad of Squirt Reynolds), Chris McInroy (Bad Guy #2, Death Metal), Courtney and Hillary Andujar (Production Designers of The Girl On The Third Floor, Bloodline), and Aaron B. Koontz (Camera Obscura, the upcoming The Pale Door) round out the collection of filmmakers."

Aaron B. Koontz and Cameron Burns are credited as the creators. When watching the trailer below, be aware that it includes material that may be considered NSFW, especially if young, impressionable children are within viewing range. (Unless, of course, you want to possibly scar them for life!) Then mark June 18 in your calendar for the film's streaming debut.

Do you feel this content is inappropriate or infringes upon your rights? Click here to report it, or see our DMCA policy.
Aaron B. KoontzCameron BurnshorrorShudder