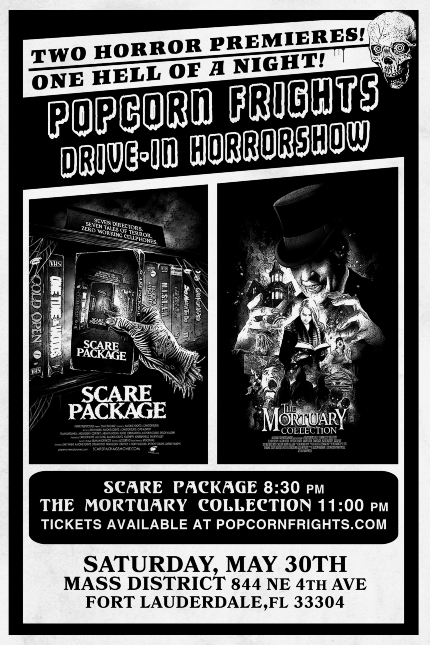 Here in the U.S., we are all eager to get outside so we can watch movies in the dark.

Yes, I know that sounds counter-intuitive, but as a movie-lover, you get the point. As one means of dealing with current conditions, drive-in theaters are enjoying a moment. Over the weekend, trade publication Variety noted that horror flick The Wretched led the box office, drawing "a respectable $3,153 per theater average during the Friday-Sunday period." Variety also notes: "Currently, 348 of the 5,400 North American theaters are open, including 169 drive-ins, according to Comscore."

Admittedly, I have not ventured out to a drive-in theater in many years, but it does sound like an attractive option, especially as the weather warms up in our part of the world. In Florida, for example, Popcorn Frights Film Festival will be hosting the premieres of two new horror films, Scare Package and The Mortuary Collection.

Popcorn Frights Drive-In Horrorshow "is scheduled to take place in 'pop-up' drive-in theaters throughout South Florida, kicking-off on Saturday, May 30th with a double-bill feature presentation" of the two anthology films noted above. The series will run throughout the summer in different South Florida neighborhoods. More information is available at the official site.

Closer to my home, Dallas Film, the organization behind the annual Dallas International Film Festival, which was originally scheduled to be held in April, was compelled to postpone the event. Now, however, they have announced their DIFF Summer Drive-in Series presented by Samsung, which will screen films outdoors, drive-in style at Four Corners Brewery, 1311 S. Ervay Street, Dallas, TX 75215.

As Texas residents know, beer, movies, and the outdoors go together very well during the summer. The series kicks off on Wednesday, June 3 with a special 35th anniversary screening of The Goonies. The official release notes: "Gates open at 7:00 pm and the film begins at 8:30 pm. Be sure to arrive early for a special introduction from the film's cast."

Upcoming planned titles in the series include Jaws and Raiders of the Lost Ark, perennial favorites which are always enjoyable experiences, especially with the company of as many people as safely, and legally, allowable. Dallas Film is also holding virtual screenings, and more information on all their activities is available on social media: Twitter and Facebook.

Do you feel this content is inappropriate or infringes upon your rights? Click here to report it, or see our DMCA policy.
dallas filmdrive-infilm festivalspopcorn frights