Jon Schnitzer's documentary, now streaming on Shudder, is rather riveting to watch. 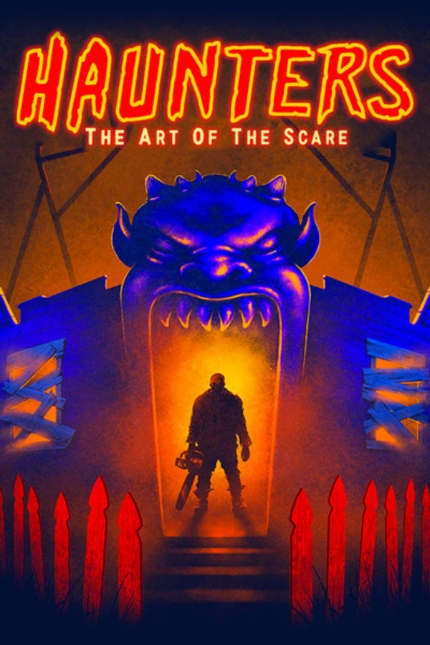 It's all fun and games until someone is left a whimpering mess.

A few years ago, The American Scream debuted at Fantastic Fest. Under the direction of Michael Paul Stephenson (Best Worst Movie), it lovingly documented the growing phenomena of handcrafted haunted houses. As I wrote in my review: "The reaction of the community to the haunted houses, professional-looking and handmade and customized and, yes, more often goofy and silly than actually scary, says more about the homeowners, their families, and their neighborhood than a volume of scholarly sociological observations."

My, how times have changed.

Directed by Jon Schnitzer, Haunters: The Art of the Scare examines and updates the same phenomena, revolving around three different aspects: a family-run haunted house, similar to the one in The American Scream; an actress who has plied her craft as a "scare" performer in a variety of shows for a number of years; an interactive, immersive experience that aims to push people to their personal breaking point -- and beyond.

The documentary regularly shifts between the three perspectives, while also providing historical background on haunted houses, as well as the breakthrough of "extreme horror" experiences that have broken boundaries since 2008. Schnitzer skillfully weaves the stories together, resulting in a compelling film that showcases the positive effects while not shying away from the more disturbing elements.

Shar Mayer is the most endearing and most relatable of the three primary subjects. She's an old hand as a scare performer, dating back to childhood; she desperately wanted to be a skeleton for Halloween, something her mother finally allowed when she was in second grade. (Maybe around the age of 7?) Delighted, Shar ran around scaring her classmates, and knew she had found her calling.

She has pursued her passion happily, despite the lack of any backing from her husband. Instead, her fellow performers have become her second family, all having fun as they jolt visitors to attractions and scare shows.

Donald Julson represents the lower-key, fun side of homemade haunted houses; he would have fit right into The American Scream. His wife is happy and supportive -- to a point -- and so is his older brother and his parents, on whose property the haunted house is constructed every year.

Gradually, though, Donald's troubled personal history is revealed through interviews with him and his family members. We learn why he must wear shaded glasses at all times, and also the appalling way he was treated by his family 'for his own good.'

The most troubling footage centers around Russ McKamey. His scare attraction, McKamey Manor, long located in San Diego, California, states clearly on its website: "Reservations Required due to the Intense nature of the experience. Not your typical 'Boo' Haunted House. You've been warned!"

That only hints at how far McKamey is willing to go. The site warns about its newest show: "Each guest will be mentally and physically challenged until you reach your personal breaking point." McKamey records his guests throughout their stay, which can last for hours, without the guest having the option of an easy exit. We see beleaguered guests begging to be allowed to leave, while McKamey cackles gleefully and refuses.

In the film, McKamey also laughingly says he would never go through the experience himself. He admittedly has a range of many different fears. (We see him running in terror from a snail.) Outside the attraction, he appears to be an exuberant, outgoing and friendly fellow. A former soldier for some 20 years, he is happily married and professionally successful. He doesn't profit financially from his shows; just the opposite, he's spent hundreds of thousands of dollars of his own money to build his extreme terror houses.

So what does his get out of it? He delights in sharing his videos, in which he bullies guests mercilessly. He tells potential 'scare performers': 'If a guest vomits, you know what you do? You take that vomit and put it back in their mouth. If they vomit again, good!' He laughs at the emotional pain his guests are experiencing.

Yet, yet, yet ... all this is stated on the McKamey Manor website. And people still line up to experience the terror after waiting months on a waiting list. Are they all masochists? What's wrong with these people?

Well, who am I to say? Some of the guests, after calming down and regaining their nerves, have happily signed up again, if not to experience it again personally, then to share in torturing strangers in the future, to push them past their breaking point.

Frankly, I found it all rather disturbing, but that's also why Haunters: The Art of the Scare is so riveting to watch.

Review originally published during the film's world-premiere engagement at Fantastic Fest in September 2017. It is now streaming on Shudder.

Do you feel this content is inappropriate or infringes upon your rights? Click here to report it, or see our DMCA policy.
documentaryFantastic Fest 2017Jon SchnitzerShudder

More about Haunters: The Art of the Scare