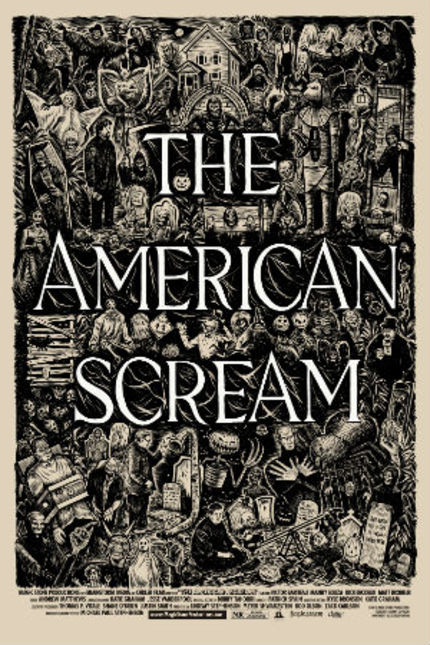 If you prefer Jack O' Lanterns to Christmas trees, The American Scream will feel like an overdose of Hallowe'en candy -- without the tummy ache.

Revolving around a family in Fairhaven, Massachusetts, the film explores the (possibly) growing phenomenon of obsessively decorating homes with elaborate costumes and props appropriate to the occasion, and then inviting neighbors over to enjoy a scare or two. Skeletons, ghosts, witches and tombstones are particular favorites in these handcrafted haunted houses, which may take months to prepare, and can be a very expensive proposition for folks often strapped for cash. No admission is charged, so the only reward is the fleeting amusement expressed by crowds of strangers.

The American Scream begins 30 days before Halloween as preparations are shifting into high gear. Victor Bariteau is the driving force in his family. An IT person by day, soon to lose his job in company-wide lay-offs, Victor finds a measure of joy and relaxation in hunting for props that he can make his own. He never uses anything straight off the shelf; he always modifies it in some way to fit his overall vision for his annual backyard extravaganza.

His wife and children are supportive, though it's his oldest daughter who is the most enthusiastic about the sacrifices required. Victor bought the family home in large measure because the neighborhood in which it's located made it ideal for a haunted house: single-family dwellings situated close together and safe enough to keep up a tradition of trick-or-treating well into the night.

Nearby lives Manny Souza, also married with children, who loves to decorate his property but takes a different approach than Victor the perfectionist. Manny has suffered serious health problems, and worries about providing for his family, but constructing his own haunted house has become a way to focus his energies.

A few blocks further away, a father and his adult son are united in their dedication to Hallowe'en. Their approach is, say we shall, more low-rent than the grandly-designed setup favored by Victor or Manny's clever use of leftover materials. Rick, a former structural engineer, is getting on in years and is limited physically, while his son Matt is enthusiastic, though perhaps more scatter-brained. The rough-spoken Rick worries about his son's ability to get along without him, without coming right out and saying so. Like their relationship, their haunted house vision may be goofy, yet it's also born out of a sincere desire to help their community. 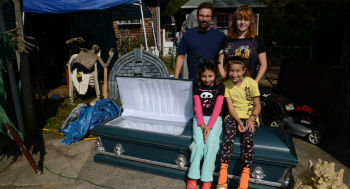 Director Michael Paul Stephenson previously made the terrific and very funny Best Worst Movie about Troll 2, in which he appeared as a child actor. In that documentary, he explored the community that sprang up around the film as its reputation as 'the worst movie ever made' grew over the years. (You can read Rodney Perkins' review of the film right here.) He is not exploring his own personal history in The American Scream, nor even his own obsession, yet he demonstrates strong filmmaking skills and taps into a similar, heartwarming spirit, this time in a small town in the Northeastern United States.

All three families share that community spirit, which may sound strange since, as one of them acknowledges, 'They're mostly strangers.' Strangers they may be, but the reaction of the community to the haunted houses, professional-looking and handmade and customized and, yes, more often goofy and silly than actually scary, says more about the homeowners, their families, and their neighborhood than a volume of scholarly sociological observations.

Review originally published during Fantastic Fest in September 2012. The American Scream will premiere on NBCUniversal's Chiller network October 28 at 8:00 PM ET and will be screening in select theaters through November. Visit the official site for additional information on screenings.

The American Scream is also available through Tugg.com, a platform that allows people to choose the films they want to see at a theater and create their own screenings for their community. Go here to request a screening in your town. (Note: the film will not be available through Tugg where there are current theatrical engagements).

THE AMERICAN SCREAM - TRAILER from Magic Stone Productions on Vimeo.