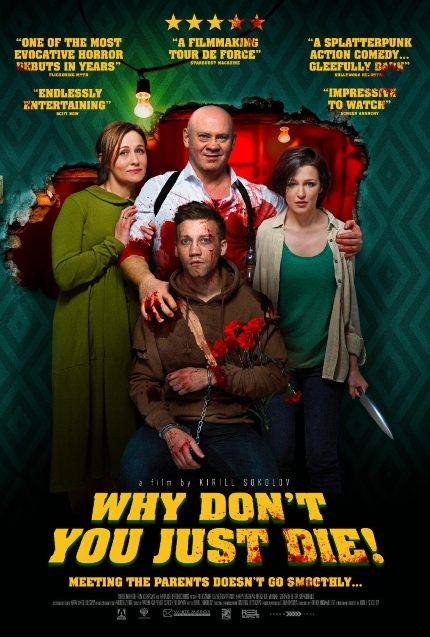 This is the mantra of our poor, clueless hero, Matvey (Aleksandr Kuznetsov) as he prepares to enter the home of his girlfriend's family in director Kirill Sokolov's violent, kinetic action explosion, Why Don't You Just Die! (the exclamation point is part of the title), but we soon learn that he couldn't be more wrong as a simple visit turns extremely bloody over the course of ninety-five tightly plotted minutes.

Matvey has sought out the parents of his girlfriend Olya (Evgeniya Kregzhde) to avenge her innocence after hearing that her childhood wasn't as safe and secure as he would've liked to assume. Unfortunately for him, everyone in the family has a secret they are trying to protect, and he's an unwitting pawn in a very violent game of chess.

When Olya's Dad, crooked cop Andrei (Vitaliy Khaev) answers the door, the father is immediately suspicious of this young thuggish looking kid supposedly dating his pristine daughter. Matvey's intentions toward Olya's dad quickly become apparent, and the two launch into a brutal ballet of blood and busted furniture while never truly understanding what the other has against him.

While Matvey's intentions may be as pure as a boyfriend bent on avenging a wronged loved one can be, it turns out that Andrei's faults run deep, and soon the two are joined by a former partner from the police force and Olya, herself in this insane melee. Meanwhile, Olya's poor doting mother just wants everyone to be happy, and when things go absolutely haywire, she may not be able to handle the emotional strain.

Largely contained to a single cramped room in Andrei's apartment, Why Don't You Just Die! is a smartly constructed and blisteringly paced bit of chaos that is impressive to watch, even for those susceptible to queasiness at the sight of blood. Twists and turns abound, and by the end of the film, no one is exactly who they seemed to be at first, leaving the audience breathless as surprise after surprise deftly manipulates our allegiances in this hilariously brutal debut feature from a filmmaker with skills far beyond his years.

With echoes of Tarantino, Edgar Wright, the majestic excess of Pekinpah, and action choreography that will make fans of The Raid smile from ear to ear, Why Don't You Just Die! is an amazing first feature from a filmmaker to watch. Densely plotted, but never confusing, the film is a delightfully devious bit of writing brought to ecstatic life by a director and a crew of technicians on top of their game.

While Sokolov deserves the majority of the credit for holding this intricate web of wild, manic excess together, equal props should certainly be given to both his composers, Vadim QP and Sergey Solovyov, as well as his cinematographer Dmitriy Ulyukaev, who manages to capture all of his director's insane ideas in a way that is guaranteed to keep the audience's attention from the very first frame.

One of the year's most fun cinematic experiences, and a debut that will have Sokolov's name on the tongues of genre film fans around the world for a while, Why Don't You Just Die! is an amazing roller coaster of a film that keeps us guessing and never bores.

Review originally published during the Shivers Film Festival in November 2019. The film is available across the U.S. on VOD, including iTunes, Amazon Instant Video, and Google Play, as of today, April 20, 2020.

Do you feel this content is inappropriate or infringes upon your rights? Click here to report it, or see our DMCA policy.
Aleksandr KuznetsovEvgeniya KregzhdeKirill SokolovRussiaVitaliy Khaev

More about Why Don't You Just Die