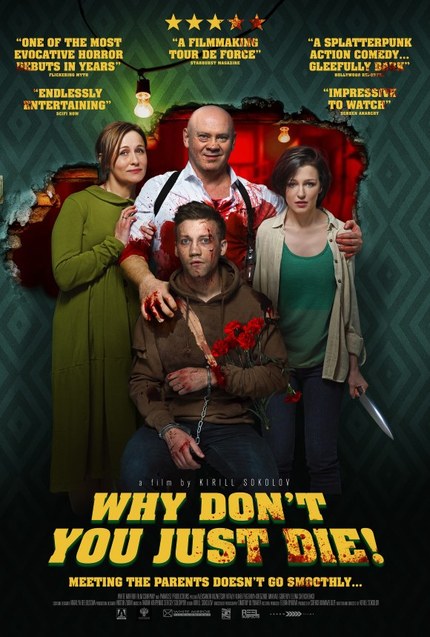 Meeting the parents is always terrifying, but even moreso when their reputation precedes them. In debutant director Kirill Sokolov's genre fest hit, Why Don't You Just Die!, the meeting just might mean murder. Young Matvey's preconceived notions of his girlfriend's father are turned on their head as twist after twist turns this story into a rollicking, convoluted joyride through some of the seediest, most bone-crunching action you've ever seen.

Winner of multiple awards at Fantasia, MOTELx, Fantaspoa, and more, Why Don't You Just Die! is a hilariously over the top thriller packed with non-stop, hilarious violence. Arrow Video picked up the film for distribution in the US/CAN/UK, and is planning a limited theatrical release on April 10th to support it, to be followed shortly after by a home video release in all three territories. Take a look at the insane trailer - featuring a very handsome pull quote from yours truly - and prepare to be blown away by this one of a kind film. Here's more about it from the press release:

Kirill Sokolov's Why Don't You Just Die! Heads to US Theaters
Arrow Video Invites Audiences to Meet (and Kill) the Parents
Brutal Action Comedy Opens April 10th in Select Markets
"A splatterpunk action comedy... gleefully dark"
--Hollywood Reporter
"A smartly constructed and blisteringly paced bit of chaos"
--Screen Anarchy
London, UK - Arrow Video is proud to announce the US theatrical release of
Why Don't You Just Die!, a blood-soaked black comedy in the vein of Quentin Tarantino and Edgar Wright.  Making his feature debut, writer/director Kirill Sokolov presents a rousing tale of family, modern relationships and the dark places they can take you to when things turn sour.  Why Don't You Just Die! will open in select theaters nationwide on April 10th, 2020.
Why Don't You Just Die! has received critical acclaim from festivals around the globe, taking home the New Flesh Award for Best First Feature and Silver Audience Award at Fantasia, Best European Feature Film at MOTELx, Best Director at Fantaspoa, Best Feature, Best Director and Best VFX Awards at Grimmfest.  Following a screening at Fantastic Fest, Film School Rejects raved that "Russian cinema has a new filmmaker to champion".
Theatrical markets include Los Angeles, New York, Chicago, New Orleans, Pittsburgh, Columbus, Knoxville, Ithaca, Houston, Lubbock, El Paso and Phoenix.
Ahead of the release, Sokolov shared, "Despite our exaggerated use of genre tropes and all the flashy effects, Why Don't You Just Die! remains, for me, an incredibly personal and sincere story. The film's inherent violence is the result of reflection on the realities of life in Russia, modern relationships, and societal attitudes. The gallows humor which pervades the film is the only true reaction whatsoever to all of this. The film is intended as an emotional rollercoaster, making the audience laugh, cry, and laugh again - but then immediately feel a sense of unease for having laughed."
Matvey (Aleksandr Kuznetsov) has just one objective: to gain entry to his girlfriend's parents' apartment and kill her father Andrey (Vitaliy Khaev) with a hammer to restore her honour. But all is not as it initially seems, and Matvey's attempts to bludgeon the family patriarch to death don't quite go to plan as Andrey proves a more formidable - not to mention ruthless - opponent than he anticipated... and Matvey, for his part, proves stubbornly unwilling to die.
Tweet Post Submit

Do you feel this content is inappropriate or infringes upon your rights? Click here to report it, or see our DMCA policy.
Kirill SokolovAleksandr KuznetsovVitaliy KhaevEvgeniya KregzhdeMichael GorComedyDramaThriller

More about Why Don't You Just Die