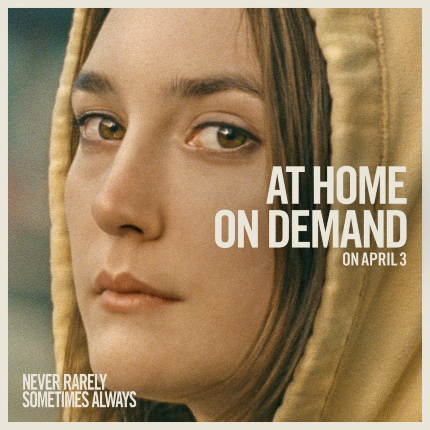 Widely praised out of the Sundance Film Festival, where it enjoyed its world premiere earlier this year, the newest film by Eliza Hittman (It Felt Like Love, Beach Rats) opened in select U.S. theaters a few weeks ago, just as the pandemic was slamming everyone. That cut short its theatrical run.

Now it's arriving on home video and will be available to rent for $19.99. The premium pricing reflects its shortened theatrical run and places it in the 'main event' category, as far as I'm concerned. The film follows two young women, Autumn (Sidney Flanagan) and her best friend Skylar (Talia Ryder), as they head from rural Pennsylvania to New York City in search of medical help so that Autumn can terminate her pregnancy.

Our contributing writer Martin Kudlac saw the film at Berlinale in back in February and filed a positive review, which we published in time for the original theatrical release. Among other things, he explained the circumstances that begin the film, establishing the anxious atmosphere:

"The teenage drama starts abruptly with a scene of school talent night when the protagonist, 17-year-old Autumn from Pennsylvania, in the act of singing a song ('He's Got the Power'), gets disrupted by shouts of 'slut' from her male peers. After a moment of agitation and hesitation as the display of sexist aggression is carried out in the presence of the protagonist's parents and friends, Autumn finishes the song to mild applause and cheers."

Things do not get better for Autumn from here. Still, Mr. Kudlac's review concludes: "Hittman's empathetic and delicate directing aesthetics make the drama compelling, without melodramatic excesses and exploitative or manipulative narrative devices and trickery."

Never Rarely Sometimes Always
The film is available from Focus Features on a wide variety of Video On Demand platforms, as of Friday, April 3, 2020. Visit the official site for details.

Do you feel this content is inappropriate or infringes upon your rights? Click here to report it, or see our DMCA policy.
Eliza HittmanindieSidney FlaniganTalia RyderU.S.