Tyler Cornack directs and stars in his debut feature, alongside Tyler Rice. 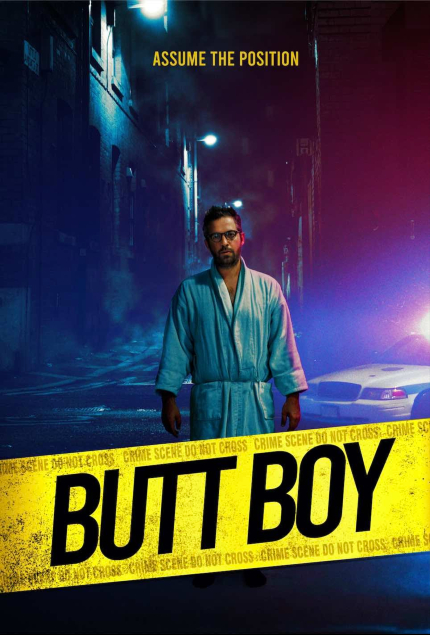 A sort of rite of passage for men of a certain age, one's first digital prostate exam can be a source of anxiety. But what if that cold, clinical finger up the bum was to set some desires stirring deep within one's soul; to ignite a passion for shoving increasingly foreign objects into the most taboo of body cavities? This incredibly odd question sets in motion the even more bizarre plot of Tyler Cornack's debut feature film, Butt Boy.

Chip Gutchell (Cornack) has been living a milquetoast life without passion for years, but his annual prostate exams awakens a dark desire within him that can only be quenched by shoving anything and everything he can get his hands on up his butt. He tries to get his wife involved to restoke the fire in their marriage, she refuses, leading him to experiment with ever stranger (and larger) objects, until one day he goes too far.

Nine years later, now a member of a happy family, and having honed his obsession to a fine point, Gutchell meets bad boy detective named Russel Fox (Tyler Rice) at an AA meeting and the two become sponsor-sponsee. Fox's instincts start to go berserk when he gets a weird vibe from Gutchell, and soon enough becomes convinced that Chip is involved in a missing child case that he's been working on, but he can't quite believe his own gut when he finally puts together exactly how the child went missing (you can probably guess). This begins a cat and mouse game that lasts most of the film's third act and that's when things get really crazy.

Cornack and co-writer Ryan Koch have crafted an incredibly bizarre experience in Butt Boy, a film with the most nonsensical of premises played completely straight. For the vast majority of the film's runtime, there is really no indication of just how wild it's going to become, but it's that early calm that really helps to sell the storm that closes the film out. Think of a film written by Quentin Dupieux, but shot as a TV movie, it's that kind of matter-of-fact efficiency that Cornack brings to the screen, which makes the tonal changes all the more abrupt. Even when the film does decide to take the plunge into full-on surreal nonsense, it manages to maintain an air of seriousness that will leave many audiences bewildered.

Cornack and Rice play their roles to the hilt, with Cornack's Chip the very picture of a nebbish frump who finds his bliss, and Rice's Fox a take-no-prisoners hard living badass who can't play by the rules. The chasm between their characters in terms of demeanor and their approach to the material makes Butt Boy all the more intriguing.

The execution of the film definitely exposes some of its budgetary constraints, but the filmmakers make good use of their limited means, saving up the film's craziest visuals for the final thirty minutes. Butt Boy is a surprisingly effective slow burn that warms the audience up, like a frog in a pot of boiling water, before taking a hard left to full-on bizarro land as the end draws near.

An exceptionally weird film that is the kind of thing you can really only see at an event like Fantastic Fest, Butt Boy is a true original. Even when it falters a bit in terms of execution, it has a heart as big as its behind, and you have to admire the commitment to the gag

Review originally published shortly after Fantastic Fest in October 2019. Via Epic Pictures, the film arrived on a rich variety of VOD platforms earlier this week. To see providers and for more information, visit the official site.

Do you feel this content is inappropriate or infringes upon your rights? Click here to report it, or see our DMCA policy.
Angela JonesKristina CliffordTyler CornackUS