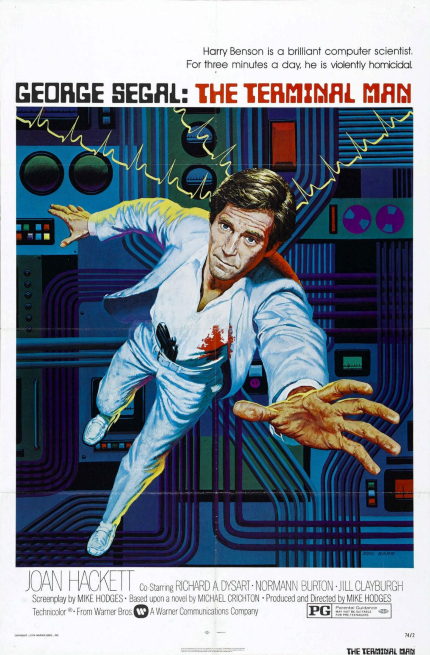 If you've seen the movie before, you may only remember that it stars George Segal in a bad wig. But the medical psychology involved is more complex than I remembered.

The Terminal Man
Released in U.S. theaters June 19, 1974. Most recently viewed, December 21, 2019, via TCM. Now available to rent in the U.S. via various digital platforms, including Amazon, iTunes, GooglePlay, Vudu, and YouTube.

Back in 1974, I distinctly remember borrowing Michael Crichton's novel from my local public library and becoming absorbed in the author's method of telling the story. The movie's trailer, which can be watched below -- and is filled with spoilers, by the way! -- sparked my interest; though I wasn't able to see it in a theater at the time. And, of course, Crichton's Westworld from the year below stirred up my interest as well.

Published in April 1972 and positioned as Crichton's followup to The Andromeda Strain, although he had published four other novels under pseudonyms and two more non-fiction books under his own name -- the novel became a best-seller. As a recent reading reminded me, it's a good, vividly-imagined book. Like The Andromeda Strain, it takes place over just a few days and is filled with dramatic events, which lends itself to a screen adaptation.

About the novel, Crichton said: "In the 1970s I saw a patient in a hospital who was being treated with electrodes implanted in the brain, hooked up to a monitoring computer. I thought this treatment was horrific, and I was amazed that the research seemed to be going forward with no public discussion or even knowledge. I decided to write a novel to make such procedures better known. This particular kind of surgery is no longer done much, so the journalistic aspects of the story are gone."

Reportedly, Warner Bros. hired Crichton to adapt his book for the screen, but "felt he had departed too much from the source material and had another writer adapt it." (Per Wikipedia quoting The New York Times.) British filmmaker Mike Hodges, best known for his feature directorial debut Get Carter (1971), came on board to write the screenplay and direct.

Hodges, who would go on to direct the beloved Flash Gordon (1980), adapted Crichton's novel with a free hand, opening it up to a variety of outdoor locations, whereas the book remains mostly at a medical facility where an elective surgery, fraught with technology, takes place.

As the finished film reflects, Hodges had the good sense to extend the surgery sequence, in which Harry Benson (George Segal) somewhat unwillingly accepts the terms for a computerized control to be implanted into his brain. The device is meant to control the patient's suffering from seizures that cause him to act in a violent manner against any unfortunate soul who happens to be nearby.

The surgery's prominence in the narrative, and Hodges' evident decision to keep the cameras entirely occupied with it, make the procedure exhaustive and increasingly tense. This mirrors what takes place, after the apparent mental fix for Benson goes haywire and he manages to escape from the facility.

In those latter scenes, Hodges contrasts the lazy sunshine of a beautiful Los Angeles day against the maniac running loose, beyond capture and control of any legal authority, and ready to become increasingly violent, even murderous, through no fault of his own.

On the medical side, Joan Hackett is the most humane among the doctors, and the only one exhibiting personal concern for Benson. Her worries are discounted by the paternal doctors in charge, represented by Richard Dysart and Donald Moffat, and in no part have been dismissed because she is a woman, a point that Crichton had explored in his novel as well.

Hodges changed the final sequences radically from the book, which is probably a good thing, in that it takes advantage of the visual splendors of Los Angeles from the air. It all builds to an inevitable conclusion that resembles, almost, a daytime noir, in tone.

Stripped of his usual comic affability, demonstrated in A Touch of Class and Blume in Love, both released in 1973, George Segal becomes a pitiable figure, even as he morphs into a medical monster. The actor would continue to show his range in Robert Altman's California Split, also released in 1974, though he ran out of things to do in Russian Roulette (1975), despite the absolutely great ending in that spy mystery.

Joan Hackett, who died far too young in 1983, shows why she was such a welcome presence in the 1970s, appearing here after her very agreeable turn in the clever mystery The Last of Sheila. Reliable performers Dysart and Moffat make good -- or is that evil? -- impressions.

I spotted other fave actors in the support cast as well, including James Sikking, Matt Clark, Steve Kanaly, Robert Ito, and Jill Clayburgh, who made a bigger mark in TV movie Hustling (1975) and then ascended to lead roles with her starring performances in Gable and Lombard (1976) and, even better, Silver Streak (1976).

The film's enduring qualities are most clearly evident in the indifference toward Harry Benson as a person, first among his doctors and then among the authorities. That sort of underlying paranoia about the crushing effects of "official" interference into our personal lives tied into the mood of the world at the time, and certainly remains relevant today.

Released in the summer, around the same time as paranoid thriller The Parallax View and the masterful Chinatown, the film was advertised as "as a mediocre science fiction effort, with a running George Segal floating against a backdrop of electrical impulses and primitive computers," in the opinion of producer Mike Kaplan, who was working at Warner Bros. in the UK on distribution. According to Kaplan, Warner Bros. had insisted that Hodges add an opening exposition sequence so audiences would have "someone to root for." (Indeed, that scene is out of tune with what follows.)

The British distribution execs refused to release it there, even though Stanley Kubrick told Mike Kaplan: "It's terrific." Terrence Malick also voiced his admiration to Hodges: "Your images make me understand what an image is."

Eventually, the film gained some recognition through retrospective screenings, following the success of Mike Hodges' I'll Sleep When I'm Dead (2003). A DVD was eventually issued by Warner Archive through their MOD program and is still available as of this writing.

Even though The Terminal Man does not necessarily provide the visceral action that might be expected of a "techno-thriller," it remains a thoughtful and provocative drama that sticks in the brain.

70s Rewind allows the writer to expound upon his fond love for all things cinematic from that raucous decade when self-isolation without drugs was frowned upon. 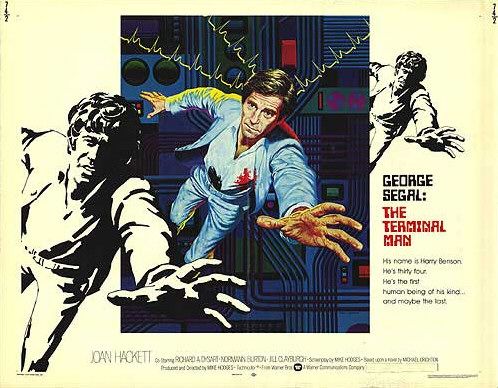 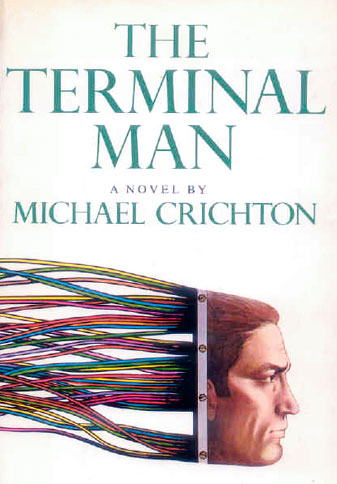 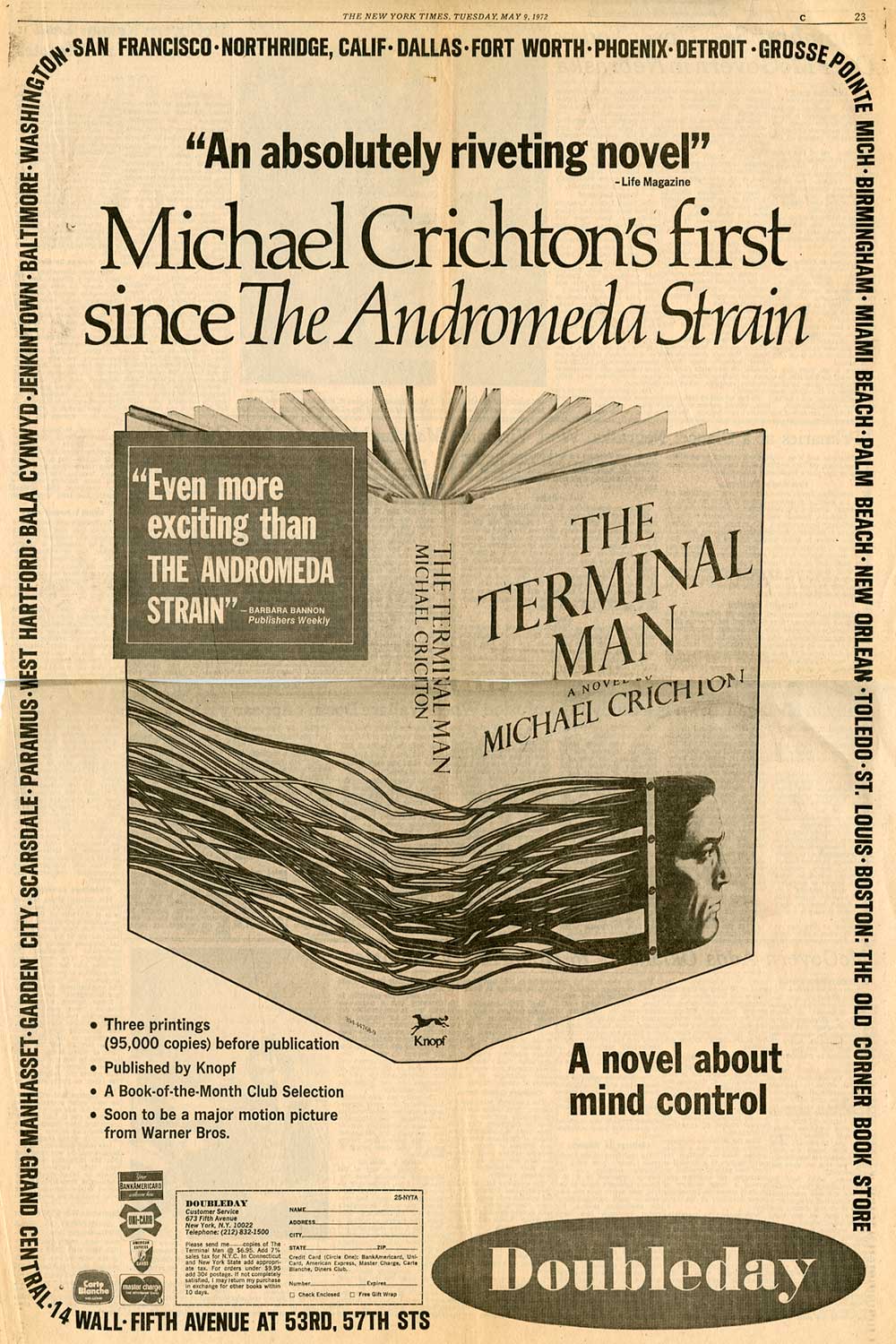 Do you feel this content is inappropriate or infringes upon your rights? Click here to report it, or see our DMCA policy.
70sGeorge SegalJoan HackettMichael CrichtonMike HodgesScience+Fiction