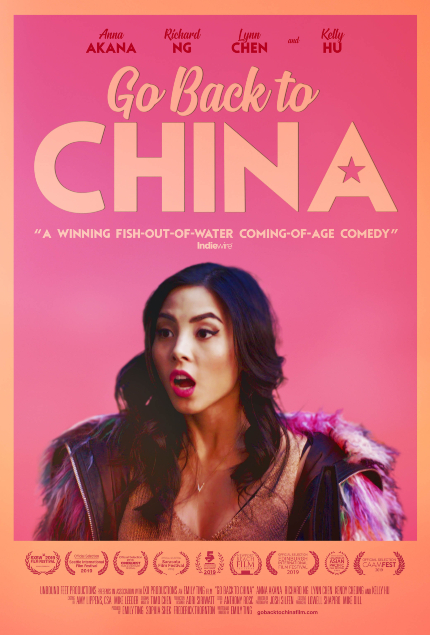 Poor Sasha Li can’t catch a break. That may be an odd thing to say about a young woman who’s being kept financially afloat by a million dollar trust fund given to her by her father, which she’s already blown half of by her early 20’s. But she’s got a fashion college degree burning a hole in her pocket, and though she has no actual work experience – she refuses on principle to be exploited for free labor by rapacious employers – she’s got great ideas that she’s sure any company would love to have, if they’d just give her a shot. Alas, no one at the many job interviews she’s had see it that way.

After her interview, Sasha walks on the street, scrolling through urgent phone messages from her father that she’s been ignoring. Distracted, Sasha bumps into a woman on the street, spilling the woman's groceries. This woman, who happens to be white, has an oddly extreme reaction. After muttering, “You people come here and ruin everything,” she then snaps this at Sasha: “Why don’t you just go back to !”

This sadly familiar – and even more sadly current, thanks to the current occupant of the White House – racist canard inspired the title of the film I’m discussing, writer-director Emily Ting's second feature Go Back to China, an endearing, brightly colored, and deceptively light film that turns sour racist lemons into sweet cinematic lemonade. Ting does so by making her entire film a sly subversion of the racist epithet underlying its title, essentially making its overarching scenario sort of a joke. The punchline is that Sasha (played by YouTube comedian Anna Akana) actually ends up doing exactly what that woman tells her to do: she literally goes back to .

Here’s how this happens. Sasha’s father Teddy (Richard Ng), finally tiring of his daughter’s unanswered messages and her refusal to come back to to help out with the family toy making business, forces her hand by turning off the money spigot she’s been living on. Teddy cancels all her credit cards and freezes her bank account. But what finally drives Sasha back to the motherland is when Teddy also halts alimony payments to his ex-wife, Sasha’s mom May (Kelly Hu). After this, Sasha reluctantly, and angrily, boards a plane to her family’s home and factory in .

This forced family reunion has Sasha meeting people she hasn’t seen for many years, some she barely knows, and some she’s never met. Teddy, thanks to his succession of ex-wives and serial extramarital affairs, is the patriarch of a large, complicated family, with complex family dynamics to match.

Sasha soon starts work at the toy making factory, following her father’s stipulation that she has to work there at least a year before she can get her trust fund money back. To her dismay, Sasha’s initially forced to start at the bottom, toiling away with the rest of the workers on the factory floor.

Still, Sasha quickly works her way up, along the way befriending the factory employees, both those on the work floor and in the design offices. She introduces some improvements to the company’s working methods and workplace environment. She takes a couple of the designers on a work trip to to view some of the new design trends they can’t access through ’s censored internet. She also insists on the workers being given better, healthier food in the cafeteria.

Sasha also comes up with bold, unconventional ideas for the toys the company makes, shaking up the staid, old-fashioned designs that lately have been failing to interest buyers. The ironic side effect of Sasha’s being forced to return to China is that she’s gaining exactly the sort of work experience which the lack of had made her such a failure at getting jobs back in the U.S.

When one of Sasha’s design ideas – and her naively impulsive methods in pushing it through – financially jeopardizes the company, however, all the old resentments return, and the consequences of her family’s troubled history rear their ugly heads.

Emily Ting renders all this with a beautifully engaging, fleet-footed, breezy style that’s a pleasure to watch. In this, she completely fulfills the promise of her debut feature Already Tomorrow in Hong Kong (you can read my review here). Her new film may scan as a sitcom on its surface, but she deepens this considerably with a number of interesting and precisely effective narrative and visual devices.

First, the film is imbued with a specificity of detail that makes use of autobiographical elements from Ting's own life and family history. She filmed in her own family’s home and factory, and she weaves informative details of the toy design business that show her obvious familiarity with these processes. (Ting, similarly to her protagonist Sasha, spent much of her younger years working in her family’s toy factory.)

Also, Go Back to China is structurally built on the contrast between its bright, candy-colored visual schemes and its darker narrative undercurrents. Beneath the lightly comedic surface lies familial strife, betrayal, and long-simmering anger and resentments that eventually erupt to the surface in the latter scenes. Josh Silfen’s vibrant, pop art-like cinematography (he also shot Already Tomorrow in Hong Kong) is a major asset in this regard, helping to render its trio of locales (, Shenzhen, ) as deliciously visual confections.

This may seem like an odd comparison, but I’d compare what Ting does here to the music of Steely Dan. Steely Dan’s musical style is posh, impeccably produced jazz-rock, but the lyrics to many of their songs are very dark and twisted. Ting employs a similar sort of contrast between form and content, creating a tension that insistently demands attention.

Ting also excels in creating characters that have many more layers to them than you would expect from a film that largely plays as light comedy. Sasha initially seems to be a shallow, spoiled party girl, but the circumstances forced on her reveal depth, compassion and generosity that wouldn’t have seemed possible on first impression.

Similarly, Sasha’s father Teddy at first comes across as a harshly tyrannical, almost villainous man whose selfish ambitions and physical urges have fractured his family. But he too has generosity and compassion deep below his forbidding, sharp-tongued surface.

Sasha’s half-sister Carol initially scans as a dutiful daughter, but we learn late in the film that she’s been harboring simmering resentment, the results of which completely upend what we thought we knew about the film’s initial situation. Even a relatively minor character such as Lulu is revealed to be more than the trophy girlfriend she initially appears to be.

All this is wonderfully acted, crowned by a great turn by Anna Akana, who in her first leading role skillfully handles both the comedic and dramatic elements of her performance with equal charismatic charm. She more than holds her own with her much more seasoned costars Lynn Chen and Richard Ng. Chen shines especially in the late dramatic scenes, making one feel the emotional weight of her character, and Ng counteracts his character’s negative qualities with a sly charm that somewhat softens this.

And though the conflicts between these characters are sometimes too baldly stated with dialogue that’s a bit overly on the nose, this is ultimately a minor flaw in what’s otherwise a clearly personal, heartfelt, and finely crafted work.

Review original published during the Asian American International Film Festival in August 2019. The film opens theatrically in New York, Los Angeles, San Francisco, and Chicago on Friday, March 6, and will also be available to watch via iTunes and various other VOD platforms. For more information about the film, visit the official website.

Do you feel this content is inappropriate or infringes upon your rights? Click here to report it, or see our DMCA policy.
Anna AkanaChinaEmily TingLynn ChenRichard NgUS