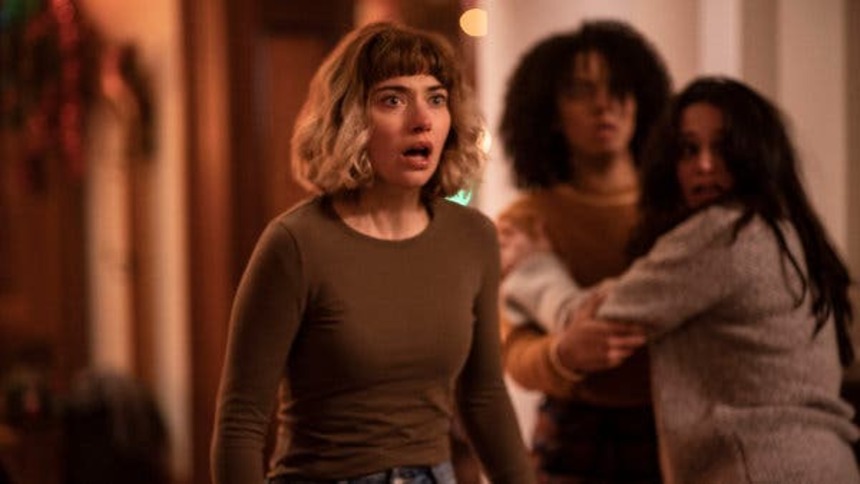 I wish I could explain to people how exhausting it is sometimes to be a woman. To know how much we have to explain and justify our very existence. How everything we say or do is met with scepticism at best, and at worst, loathing and violent reaction. And how much worse it is for any woman of colour/disabled woman/member of the queer community, etc. No wonder we're angry. And we sisters stick together because we're all we have to lean on.

Director/writer Sophia Takal (Always Shine) and co-write April Wolfe know this well, and in this update of the cult classic, make Black Christmas for a new, young generation of girls who need to see sisters in solidarity, as well as kicking some much-deserving male ass. And kick-ass they, do and the film does. With a keen eye and ear to teenage/college girls' experiences, and understanding our contemporary times, Takal has made was is sure to be a cornerstone of the new generations' movie oeuvre.

Riley (Imogen Poots) is trying to make is through the last day of classes before Christmas break, which includes hearing how esteemed Professor Gelson (Cary Elwes) is somewhat miffed about having to add some women and people of colour writers to his philosophy class, and also attend a small talent show in the fraternity building where she was raped by a popular student a few years ago. Not that anything happened to him, of course, since no one other than her sorority sisters believed her. And so this talent show, she and the girls take a stand, exposing his deeds for everyone, to the women's delight and the men's anger. Now it seems that someone, who has already started targeting young women on campus, is after Riley and her fellow 'orphaned' sorority sisters Kris (Aleyse Shannon), Marty (Lily Donoghue), Jesse (Brittany O'Grady), and April (Madeleine Adams).

This review will give you some spoilers, but as Wolfe says, it's not what happens but how it happens that makes a movie great.

Let's get this out of the way: this new Black Christmas is not a remake in the literal sense. There is a killer stalking college sorority girls as the Christmas break begins, but that's pretty much it in terms of plot (though there are some nice visual and audio nods to the original peppered throughout). But it is a spiritual cousin; the original featured discussions on how women perceive each other, how they support each other, on abortion and a woman's right to choose. Black Christmas looks to rape culture, particularly as it is honed and amplified in the place where children have their first taste of independence, and where 'traditions' are upheld as some sort of moniker for society.

This is a film that wears its politics outfront; there is no subtelty, nor should there be, as Takal and Wolfe know that their audience has no time or interest in themes and ideas hiding in the shadows. The sisters turn what should be a sexy Christmas song into an exposure of Riley's rapist; a tenured professor would rather organize mass murder than give even the slightest inch on his syllabus filled with dead white men; there are conversations about diva cups and #notallmen because yes, these are the things that teenage and college girls are dealing with right now, and putting it on the screen in a compact, concise and sleek storyline works as a text.

The most horrifying moment comes not from the violent attacks against the girls, but from a security guard, who is every official that any woman trying to report a problem has had to deal with. Riley is trying to tell him that her friend is missing; she's upset and trying to figure it out herself. But apparently that's not this guard's problem, and if only Riley would calm down it would be fine, and hey, the girl's probably just with some guy anyway. This is a reminder to Riley that she and her sisters are going to have to take care of things themselves.

Poots and Shannon excel in their roles, providing the two sides of reaction to the anti-woman world and culture in which they exist: Poots has survived her ordeal, though not without scars, but just wants to keep going; Shannon refuses to accept the status quo and fights the patriarchy and toxic masculinity on every front. This may make them butt heads on occasion, but when the chips are down, they are there for each other. Other characters, especially the men, might seem a bit cookie-cutter, but each actor finds some depth, whether they are playing the betrayer, the guy who thinks he's the nice guy, or the actual nice guy, these are new tropes for the next generation of horror fans.

Some horror fans might be disappointed at the violence - certainly there is violence and pretty scary moments, but no blood or gore. Well, it is aimed at a PG-13 audience, so no gore, but there are still some pretty good fights to be had, an actual smart introduction of why cell phones can't be used, and smart girls actually figuring things out, making realistic mistakes, trying, and fighting back.

Black Christmas doesn't quite stick the landing; the supernatural explanation for the boys' murderous behaviour seems a bit tacked-on for a script that otherwise is smart and inventive. Squarely aimed at a younger generation as both a catharsis filled with kick-ass girls, and a meditation on toxic masculinity, gaslighting, and the rest of the shit we put up with on a daily basis. I literally punched the air at the end Black Christmas; it's the kind of film I wish I'd had when I was a teenager, to sit someone in front of and say "Here, this is why I am angry, and this is what I wish I could do about it."