Now on Blu-ray: A Merry BLACK CHRISTMAS To The UK From 101 Films 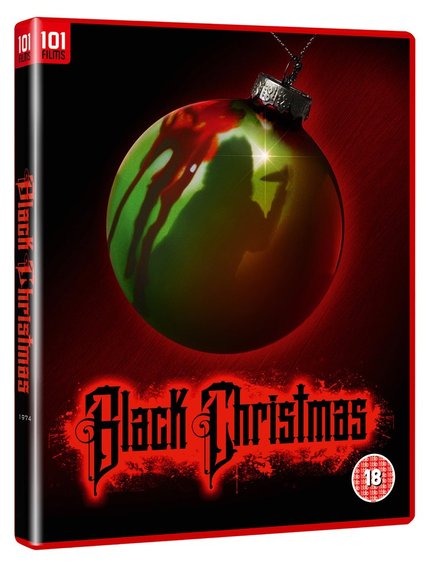 Several years before John Carpenter struck gold with his low budget marvel Halloween, Canadian journeyman Bob Clark created the template for what would become known as the slasher film with 1974's Black Christmas.

This horror film was among the first to follow the now familiar pattern of the slasher genre that went on to dominate early '80s horror cinema. Black Christmas utilized the unseen killer knocking off nubile coeds in their sorority house one at a time in search of vengeance for some unknown slight committed against him. Director Clark, who would go on to even greater acclaim as the director of one of the most famous Christmas films of all time, A Christmas Story, created what has become one of the most iconic films of the period and the first film to exploit holiday terrors in a trend that continues even today.

Black Christmas's story, of an obscene caller who terrorizes a sorority house during the holiday break, is one that would become rather familiar to horror audiences by the mid '80s, but at the time it was quite novel. Not only did the film introduce a relatively new idea, the unseen killer stalking the college coeds, it also included a cast that was pretty high profile compared to what would came after. In the nominal lead was Olivia Hussey, who had scored a major international hit with Zeffirelli's Romeo & Juliet in 1968. Also on board were Margot Kidder (Superman, Sisters), Kier Dullea (2001: A Space Odyssey), Andrea Martin (SCTV), and cult film legend John Saxon (Tenebre, Enter the Dragon, A Nightmare on Elm Street, etc.).

The result of this confluence of talent, who really had no business slumming it in what should've been a no budget Canadian horror film, was nothing less than a milestone in terror. Black Christmas is not only among the most prominent progenitors of the slasher genre alongside films like Psycho, it's also a genuinely great film.

101 Films brings Black Christmas to Blu-ray in the UK for the first time with this disc, released a few weeks ago in the final weeks of 2017. The film has already had two Blu-ray releases in the US, and one in Canada, and 101 Films does its best to stay in competition with those two discs, but does ultimately fall a bit short.

The A/V quality on the disc is about as good as one could expect. The only available source material for the disc wasn't in optimal shape, and so the picture is good, but by no means a knockout. However it does the job, as do the 5.1 surround and original 2.0 stereo audio tracks. I sampled both and found myself preferring the surround track as it seems to produce a more full sound, even when it comes to dialogue rendition.

When it comes to extras, the 101 Films Blu-ray recycles some of the best bonus materials from previous editions. Borrowing from the Canadian "Season's Grievings" 40th anniversary disc from a few years back as well as the US Scream Factory disc's best features. There is a decent length interview with star Art Hingle in which he talks about the film and Canada's film industry at the time and today, as well as a similar interview with co-star Lynne Griffin. The disc also includes a 40th anniversary reunion panel from Fan Expo Canada in 2014 and a making-of documentary from that same year that appears on both the Scream Factory disc and the Canadian Anchor Bay release.

Yes, the UK disc is missing several of the bonus materials from Scream Factory's comprehensive 2017 release. There's a whole other cut of the film that is missing, as well as numerous interviews, but if you're locked to Region B, there is no shame in owning this release, which is very good on its own merit. Definitely recommended for European fans.