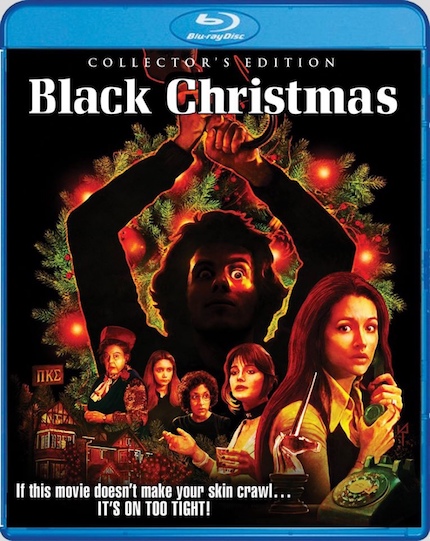 Canadian director Bob Clark (A Christmas Story, Murder By Decree) tragically left this mortal realm in a car crash in 2007, but his legacy of work lives on. He worked in several genres, but in horror, his 1970s masterpiece Black Christmas is revered by both fans and filmmakers.

It's easy to see why when you watch the movie. Its fantastic cast John Saxon, Olivia Hussey, Art Hindle, Keir Dullea, and Margo Kidder stars in a film that's both scary and pushes hot topic buttons (abortion) that are sadly still relevent today.

A 2006 remake had a chilly reception, and the original remains unsurpassed. After all, Black Christmas is said to have influenced John Carpenter's Halloween. The dread that Clark created was palpable and still quite effective; in fact, the entire film holds up very well despite over 40 years in passing since its release.

I myself tend to watch it every December as one of my Christmas traditions, and I'm thrilled that Scream Factory has released a new Blu-ray just in time for my annual viewing! I'm not partial to slasher films because they tend to be dumbed down and seem to exist solely for creating massive body counts. But Black Christmas is in a category of its own, among the ranks of Peeping Tom and Psycho, at least in my own humble opinion.

Black Christmas from Scream Factory is a good release. It's not amazing, but it's good. I can't say I was particularly impressed with the picture. There is a note at the beginning of the film that the negative scan produced a result that looks as good as when the film was released in theaters.

With noticeable flickering and dark areas that bleed into one another, I'd have to say it's probably the best this film has looked on Blu-ray, but not too much noticeably different from the last release. However, it's still a worthy buy for Black Christmas completists. You'll see a few new interviews, new cover art, and plenty of archival interviews from the last version -- as well as the entire film from the 2006 Critical Mass release on disc 2 for your comparison.

Check out the bonus features and trailer below. You can read more on Scream Factory's Black Christmas release here.

Do you feel this content is inappropriate or infringes upon your rights? Click here to report it, or see our DMCA policy.
Art HindleBlack ChristmasBob ClarkJohn SaxonKeir DulleaMargo KidderOlivia Hussey