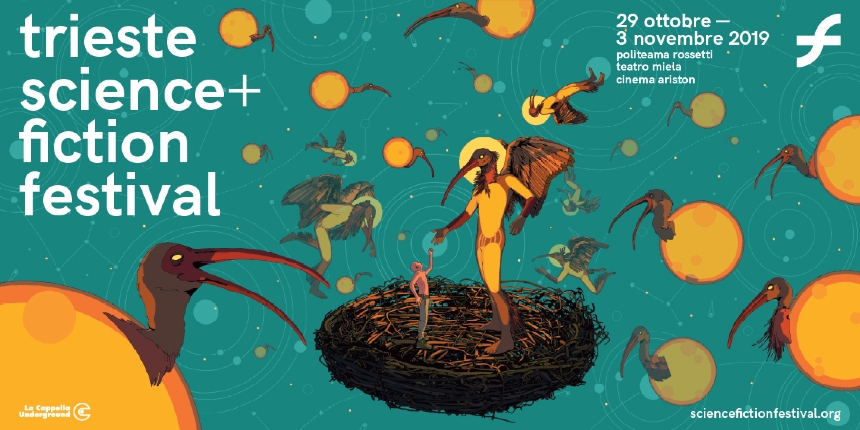 For we poor souls who are not in Italy right now, attending the 19th edition of Trieste Science + Fiction Festival, it all sounds like a fantasy out of genre-film heaven.

it's not only the films, though the lineup is mouth-watering (see below and salivate), nor the setting, an undoubtedly gorgeous city and seaport nestled in northeastern Italy, nor the knowledge that our own Todd Brown is in attendance. (I'm not a jealous guy by nature, but c'mon!)

No, what really makes it sounds like a fantasy is the combination of all those factors, plus the news that filmmaker Brian Yuzna (Society, to name just one) is also in attendance "as president of the jury of the Asteroide Award, the international prize awarded each year to the best science fiction and fantasy film by a first-time director," and that other filmmakers, such as Alexandre O. Philippe, are also present for the festival.

The immortal director, producer and special effects creator Phil Tippett, winner of two Academy Awards and famous for his visual contribution to The Return of the Jedi and Jurassic Park, is this year's recipient of the Asteroid Lifetime Achievement Award. He will receive the award during the official ceremony at the Politeama Rossetti on Sunday 3 November at 5.00pm.

Between then and now, more films will be showcased on the silver screens of Trieste. Please excuse while I weep quietly in my cold flat on a cold day in America, thinking about films that others are watching, while they enjoy the exalted company they keep.

(All official verbiage below provided by the festival.)

Iron Sky - The Coming Race by Timo Vuorensola
After the Nazis from the moon of the first Iron sky, finnish director Timo Vuorensola is back behind the camera for the second chapter of one of the best received science fiction comedies of the last few years. This time, Earth will have to face the Vrils, an ancient reptilian race who landed at the centre of Earth 65 million years ago.

Ghost Town Anthology by Denis Côté
In competition at the 2019 Berlin Film Festival, Ghost Town Anthology is a hybrid film by Canadian director Denis Côté, who since 2005 has been gaining a solid reputation in the best international film festivals as an independent author, both at home and abroad.

Extra Ordinary by Mike Ahern, Enda Loughman
Mike Ahern and Enda Loughman present an unmissable romantic comedy with supernatural elements, skillfully playing with the traditional tropes of the possession genre. The result is a bubbly horror comedy unafraid to be politically incorrect.

Aniara by Pella Kågerman, Hugo Lilja
An adaptation of the Nobel Prize-winning author Harry Martinson's, Aniara is one of the many spaceships used for transporting Earth's population to their new home planet Mars. But just as Aniara leaves the ruined Earth, she collides with space junk and is knocked off her course.

Code 8 by Jeff Chan
Jeff Chan presents, as an Italian premiere, his sci-fi action based on the short of the same name, a project that generated over $2M in crowdfunding. In a future where the authorities persecute anyone who is "different", a young man with super powers has no choice but to accept the offer of a criminal who wants to take advantage of his abilities, even if it means drawing the attention of the law enforcement agencies.

Last Sunrise (最后的日出) by Wen Ren
Last Sunrise is one of those stories that reflect the light of the human spirit that sparks in the darkest of times. A future reliant on solar energy falls into chaos after the sun disappears, forcing a reclusive astronomer and his bubbly neighbor out of the city. Temperature goes subzero and oxygen depletes: the only hope is a miracle at their final destination, District Four. A Chinese sci-fi film which is already a favorite, and a winner, in the festival circuit.

Jesus Shows You the Way to the Highway by Miguel Llansó
CIA Agents Palmer and Gagano are tasked with the mission of destroying a dangerous computer virus called 'Soviet Union'. They enter the system using VR but the mission turns into a trap; the virus is far more complex than they ever expected. Miguel Llansó, at TS+FF in 2015 with Crumbs, is back in Trieste with a delirious ride, The Matrix on Acid!

Blind Spot (L'angle mort) by Pierre Trividic, Patrick Mario Bernard
Dominick has the power to turn invisible, but rarely uses it. Just from time to time to spy on his neighbours. He has kept it a secret, hidden even from his fiancée. Dominick is an ordinary man: he has a job, he lives in an apartment, and he doesn't know what to do with his power. Until his ability to control his gift gets out of hand... Superheroes have never been so vulnerable...

Sea Fever by Neasa Hardiman
A solitary marine biology student, doing research on a fishing trawler, struggles to gain the trust of the close-knit crew when they encounter an unfathomable creature that threatens their lives. A monster movie, which is also a dreamy thriller, and a story about taking responsibility - for ourselves, our actions, our community, and our world.

- FESTIVAL MIDNIGHT
Festival Midnight explores the most provocative and dangerous territories of genre cinema. Four late night occasions to enjoy the best in contemporary horror. Adventurous remakes, action, horror hardcore, curses and tasty cameos: all this in the four midnight Italian premieres of this year's edition.

RABID by Jen and Sylvia Soska
A remake of David Cronenberg classic movie by the two "terrible twins" of horror film. An aspiring fashion designer undergoes a revolutionary treatment after ending up disfigured in a car accident. Although the procedure transforms her into a beautiful woman, the collateral effect is she is left with an insatiable thirst for blood.

BLISS by Joe Begos
At his third movie in six years, Joe Begos has established himself from the start as a reference in horror hardcore.

THE CURSE OF VALBURGA by Tomaž Gorkič
The Curse of Valburga is a politically incorrect black comedy with an abundance of violence and blood inspired by the horror/slasher films of the late 70s and 80s.

BULLETS OF JUSTICE by Valeri Milev
Among the most anticipated movies of the season, Bullets of Justice by Valeri Milev arrives in Trieste: "It's not a film, but a schizophrenic dream that mocks the action-horror tropes". With Danny Trejo as a father and mentor, Rob Justice will take you on this absurd and delirious carousel.

Trieste Science + Fiction Festival honors for its 19th edition the Asteroid Lifetime Achievement Award to director, producer and special effects creator Phil Tippett, winner of two Oscar Awards © and famous for his visual contribution to The Return of the Jedi and Jurassic Park.
Phil Tippett will receive the award during the official ceremony at the Politeama Rossetti on Sunday 3 November at 5.00pm.

- OPENING FILM
LITTLE JOE by Jessica Hausner
The film will be presented as an Italian preview thanks to Inspired Movies, after the presentation in competition at the last Cannes Film Festival, where its protagonist, Emily Beecham, was awarded Best Actress. Alice has created Little Joe, a very special flower that makes its owners happy. But as the flower grows, suspicions also grow that it is not as harmless as the name would suggest.

- BRIAN YUZNA
Brian Yuzna, creator of cult fanta-horror movies of the '80s and '90s, to name but a few Society (1989), Re-Animator (1985) and The Dentist (1996). He will be in Trieste as president of the jury of the Asteroide Award, the international prize awarded each year to the best science fiction and fantasy film by a first-time director.

- SCI-FI CLASSIX
The famous documentarist Alexandre O. Philippe will present Memory: the origins of Alien, about Ridley Scott's masterpiece. The first anniversary will be Alien (1979), and very successful science fiction cult that this year celebrates its first 40 years: for the occasion, the film will be screened at the Trieste Science + Fiction in a restored version.

The festival will also celebrate the first 20 years of the Matrix (1999) by Lana and Lilly Wachowski. Great celebrations also for Star Trek (1979) by Robert Wise, the first film dedicated to the eponymous sci-fi series that, 40 years after its theatrical release.

- SHORT FILMS
An incredible journey through the strange worlds of the fantastic: 41 works, 22 nations represented, 20 previews, 10 Italian shorts, 3 programs and 1 focus. The official selection of the Trieste Science + Fiction Festival's short films includes three programs and a focus: the Fantastic Shorts, the competition for the best European short film Méliès d'argent in collaboration with the European Fantastic Film Festivals Federation, Spazio Italia and the Poland focus.

Do you feel this content is inappropriate or infringes upon your rights? Click here to report it, or see our DMCA policy.
Brian Yuznafilm festivalitalyPhil TippettScience+FictionTrieste