Review: THE IRISHMAN Feels the Heavy Weight of Mortality 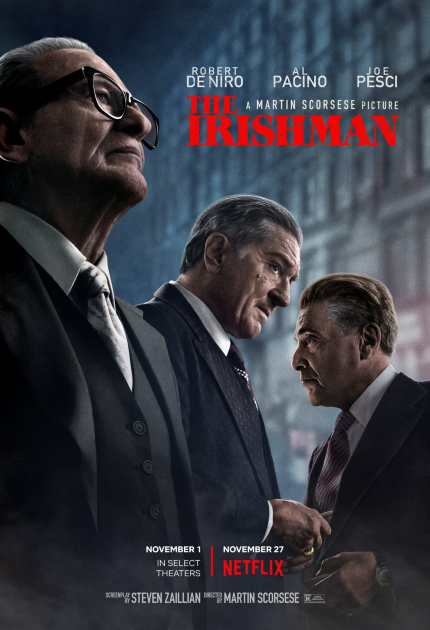 Martin Scorsese has had a very long and eclectic filmmaking career, but what he’s probably best known for are his gangster epics such as Goodfellas and Casino, films that both epitomized and transformed the genre, and were hugely influential on those following in their wake.

And now, after much anticipation and speculation, comes The Irishman, Scorsese's latest contribution to this storied genre canon. It forms a loose trilogy with Goodfellas and Casino, with all three films being superficially similar – sharing common subject matter and milieu, based on true stories adapted from books – but each having its own distinct style and narrative approach.

The Irishman, written by Steven Zaillian and based on Charles Brandt’s book I Heard You Paint Houses, is structured around the (probably not completely accurate) memories of Frank Sheeran (Robert De Niro), whom we first meet as a man in his 80s living in a nursing home, telling his story to an unseen listener. Sheeran’s first appearance is preceded by one of Scorsese’s signature Steadicam long takes, sinuously weaving its way through the nursing home, immediately invoking the famous trip through the Copacabana in Goodfellas, but this time with a much more somber, funereal air, set to The Five Satins’ doo-wop classic “In the Still of the Night.”

Even though the nursing home scenes form the film’s overarching framing device, Sheeran’s memories take us to yet another narrative frame, which tracks a road trip to a wedding taken by Sheeran and his friend and mentor Russell Bufalino (Joe Pesci), along with their chain-smoking wives.

These nested flashbacks show us the younger days of Frank, a World War II veteran, who in the 1950s is your average working stiff, delivering butchered meats by truck. It’s not long before Frank, struggling to provide for his family, is doing underhanded things to make more money, such as skimming some of the meat from vendors to sell to others himself, pocketing the profits.

It’s around this time that Frank meets Russell, a local mob boss who takes him under his wing. Frank is soon doing hits for the mob, which are shown in one of the film's frequent masterful montage sequences, the kinds of which have been perfected over the years with exquisite precision by Scorsese and his longtime collaborator and ace editor Thelma Schoonmaker.

This occasions one of the more memorable images in Scorsese’s oeuvre, which is a large pile of underwater weapons, a spot in a body of water where Frank and other killers dispose of their guns after committing hits. Frank says that the resulting submerged cache of weaponry “could arm a small country.”

Frank is simultaneously an active participant in crime and a passive drifter through decades of history, and this drifting leads him to the most significant figure in his life, the International Brotherhood of Teamsters union president Jimmy Hoffa (Al Pacino). Frank remarks that although people barely remember who he is today, in the 50s and 60s, Frank claims that Hoffa was bigger than Elvis or the Beatles. We see Hoffa delivering passionate speeches to his union members, telling them that the truckers he represents are the backbone of the nation.

The Teamsters were notoriously mob connected during this period, and these connections are what put Frank in Jimmy Hoffa’s orbit. The two men form an almost immediate bond, with Frank soon becoming Hoffa’s right hand man, their families frequently visiting each other, and Frank becoming president of a union local with Hoffa’s help.

But then Hoffa and the mob clash, when after doing a stint in prison for jury tampering, he tries to regain the presidency, becoming increasingly isolated when he attempts to fight the union’s mob influences. Hoffa also threatens to expose illegal activities to the government, putting in danger both himself and Frank by association. Frank, also under pressure from Russell, tries to broker a rapprochement between both sides, but eventually he has to make some hard choices about where his loyalties lie.

The Irishman, at 3 hours and 29 minutes, is Scorsese’s longest film, but paradoxically feels smaller and less epic than Goodfellas or Casino (or for that matter other long Scorsese films such as The Wolf of Wall Street and Silence). Appropriately to being structured as the reminiscences of an elderly man, The Irishman has a much slower pace than Goodfellas or Casino, even though there’s much death and killing. A wry running gag threaded throughout the film has characters introduced with onscreen titles informing us how they will eventually die or be murdered.

Although The Irishman spans many decades, much like the other films of the gangster trilogy, it feels shallower, and not as illuminating about gangsters and the times they lived in as the other films. These characters have less interiority and complex reflection than characters such as Henry Hill in Goodfellas and Ace Rothstein in Casino. The characters in The Irishman approach their killings and shadowy maneuverings with a grim, workmanlike manner, seemingly never bothered with the moral implications of what they do.

And you really do feel the 3½ hours of the film’s length; it is very episodic in its structure, and meanders quite a lot. This meandering is clearly intentional, mirroring an old man’s autobiographical storytelling, with all its rambling and digressions. Although The Irishman is unquestionably better experienced as a theatrical event, its episodic quality makes it well suited for Netflix, which is where the film is eventually headed, and where the vast majority of its audience will view it. Because the film isn’t so strongly plot driven, one can pause it for a while and pick it up later on without significantly harming the effect; one can effectively treat it as a binge-able series rather than a traditional film.

Another serious weakness of The Irishman is the glaring lack of women’s presences and the way their stories and perspectives are pushed to the periphery. The film is sorely lacking a dynamic woman’s performance such as Lorraine Bracco's in Goodfellas or Sharon Stone’s in Casino. Instead, we get things like Frank and Russell’s wives being reduced to chain-smoking, bickering caricatures, and Frank’s daughter Peggy (played by Anna Paquin as an adult) being mostly a silent, disapprovingly glaring presence.

This brings me to the performances, where I have to mention the much remarked on Industrial Light and Magic de-aging technology employed by the film in its flashback scenes, so that De Niro, Pesci, and Pacino, all actors well into their 70s, could appear decades younger in these scenes. The technology is definitely noticeable initially, but one eventually gets used to it, and it ultimately isn’t any more distracting than an elaborate makeup job would be. Also, it’s not like these actors are being required to play twenty year olds; the digital time machine doesn’t take them further back than middle age.

All this digital trickery thankfully doesn’t detract from the performances here, which are uniformly fine. De Niro nicely captures his character’s grimly unquestioning acceptance of his existence as a dutiful mob soldier, as well as the later pangs of regret for the hurt he brought to his loved ones as a result.

Pesci, in his first screen role in a very long time, is impressively quiet and subtle, a stark contrast to the impulsively violent, hotheaded characters he’s played in Goodfellas, Casino, and other films. Pacino, in his very first Scorsese film appearance, fully embodies the larger-than-life Jimmy Hoffa; Pacino chews and attacks the scenery as you would expect and hope he would, and as only he can.

In the end, although The Irishman falls significantly short of Scorsese’s best work, it still has much to recommend it. Rodrigo Prieto's cinematography (his third collaboration with Scorsese, after The Wolf of Wall Street and Silence) is a major asset, lending an elegant, yet down-to-earth and non-showy style to the images. Thelma Schoonmaker’s masterful editing carries us through the many transitions and phases of Frank Sheeran’s wild ride through American history.

The Irishman represents, with its somber and mournful mood, what may be Scorsese’s farewell to the sort of gangster tales that largely made his reputation. Gone are the heady, glamorous scenes of the mobster high life. Instead, we feel the heavy weight of mortality and the grim finality of where that lifestyle leads. The film’s final image sees Frank Sheeran, a solitary old man, asking that his door not be completely shut, but left open just a crack, as we peer in at him, a man completely alone, his only company being his own guilty conscience and regrets.

Review originally published during the New York Film Festival in September 2019. The film opens in select theaters on November 1 and begins streaming on Netflix on November 27.