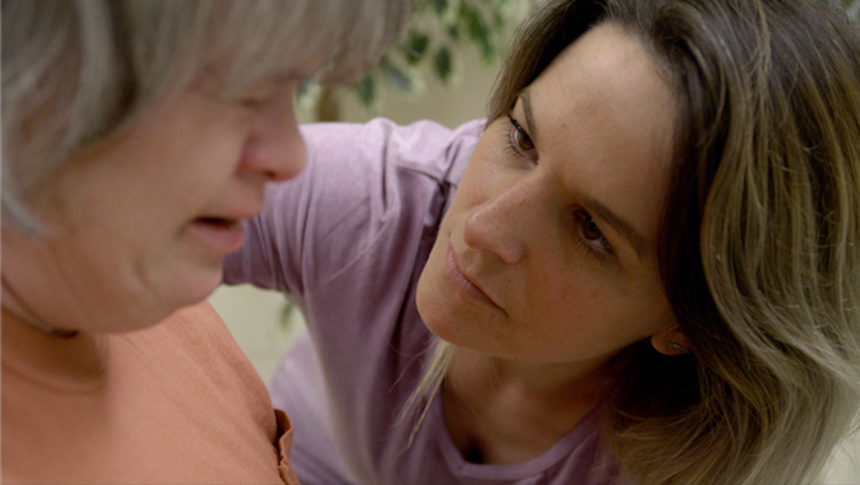 Religious cults seem to be plentiful in the USA, or so the movies would have us believe. In a country where it is automatically assumed that one has a relgious belief, it would seem that fear of the devil runs deep, particularly in more isolated areas. So what happens when you've managed to escape such a cult, but the fear follows you? Can you shut out the voices? Can you truly believe it isn't real? Or will it always be inside you, a worm wrapped around your heart?

In the follow up to his 2013 film Jug Face, Chad Crawford Kinkle returns with Dementer, another story of people and their strange beliefs in the backwoods of Tennesse. This time, it's the story of a woman who got out, at least physically, who continues to be traumatised by what she experienced, the effects of which send her spiralling into back into the beliefs even as she is now entrusted with the care of others.

Kate (Katie Groshong) is trying to put her life back together after escaping a strange backwoods cult run by Larry (Larry Fessenden). After working odd jobs, she decides she wants to do more, and starts working caring for people with special needs. She becomes attached to one such person, Stephanie (Stephanie Kinkle, sister of the director), a woman with down syndrome; as Kate spends more time with her, Stephanie gets sicker, and Kate starts to hear voices, especially the voice of the cult leader, and starts to believe that the devil is after her.

The low budget of Dementer might have been out of necessity, but that doesn't mean it can't be made to fit the story. Kinkle's uses the cinema-verité style of that budget to emphasize the world that these characters live in. With much of it filmed in the actual places being portrayed, such as the centre for people with special needs, as well as those people and their caregivers, we are taken into this world as a real place, a place where these cults can and do exist on the fringes that perhaps aren't so far away, able to take in people who are perhaps vulnerable due to lack of options and perpetual cycle of low-paying employment (even having escaped from this cult and with few employment options open to her, Kate has to live in her car).

The result is what you might call an analog portrayal of cult and ritual, of belief and trauma, one that relies on its actors and post-production sound editing to convey its story; I write this as a complement, as the films relies on its wits and an audience that is keen to follow where the literal and metaphorical road takes us. Kate hears those voices that haunt her in the middle of the night when she is alone, and when she is working, as trauma follows those who try to escape it. Kate tries to survive with the tools on hand, as she tries to save Stephanie with the tools she can get: she finds a way to get the cow heart, she will inscribe on aluminium foil, she will even kidnap her if she thinks it's the right thing to do, and all without glamourous setting or fancy ritual.

Kinkle developed the story around his sister, and his work at properly representing people with developmental disabilities pays off: they are never the butt of jokes, we see them in their natural surroundings both unglamourized and played by the actual people with these needs; and yet at the same time, Stephanie is a crucial part of the story because of her needs. Groshong plays Kate as a woman who is trying to be strong not only for herself but for those in her care; she takes that care seriously, almost too seriously when she puts Stephanie in danger in order to protect her. The climax is upsetting, dark, and just ambiguous enough to leave you guessing.

Dementer strips away excessive artifice and indulgences, and get to the heart and blood of a story on the ties that bind us to the past, our attempts to cut free of them, and our misguided attempts to help others, as the scars that can never quite heal or hold back the blood.

Do you feel this content is inappropriate or infringes upon your rights? Click here to report it, or see our DMCA policy.
Chad Crawford KinkleDementerKatie GroshongLarry FessendenNashville 2019Stephanie Kinkle