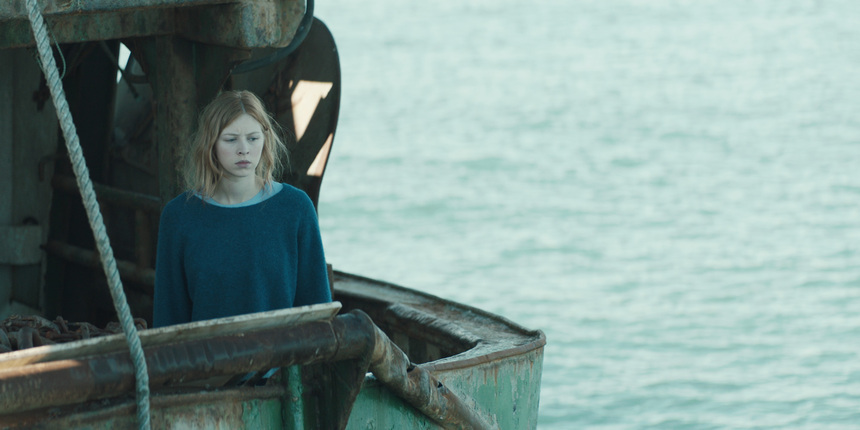 Aboard the boat, she has to confront practically everyone, from those who don't see the need of someone like her onboard, to the supertitious woman who thinks that because of her red hair, she's going to bring bad luck to the ship. Slobhán struggles with her own self regarding the rest, and the film makes us feel that through the isolation of the ocean and her own face, which becomes a place where most of the changes in the film happen.

It's a fascinating concept, particularly considering how little we actually know about the abisal life underwater, the unknown mysteries, and how monstruous the things that we've found about truly are. The ship becomes somewhat stuck as the monster attaches its tentacles to the sides of the ship, but it's not until later that we truly know the nature of how a series of larva-like creatures grow inside the eyes of the infected.

The film has a contrasting balance, particularly between its more explorative/investigative first half to its more thriller/horror-centered second half. Neasa Hardiman manages to create a curious ambience, focusing on the idle moments on the boat, the dead time if you will, the moments we spend in solitude with each of the people of the crew, particularly the protagonist, who becomes more and more passionate, and has to force herself to care about those around her, under the crisis of a possible widespread parasite infection.

The film will enjoy its East Coast Premiere at the Brooklyn Horror Film Festival tonight, October 24, 2019.

Do you feel this content is inappropriate or infringes upon your rights? Click here to report it, or see our DMCA policy.
BelgiumBrooklyn Horror 2019Brooklyn Horror Film FestivalHermione CorfieldIrelandNeasa HardimanSweden