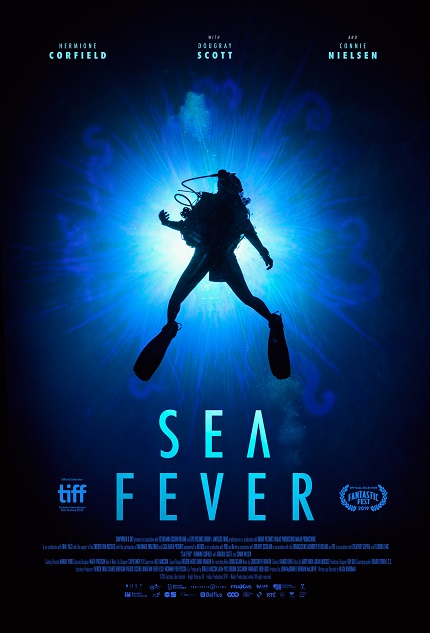 Have you ever seen photographs of red-carpet events and wished you could be there? Next week, you are invited to the live streaming premiere of Sea Fever. No more FOMO!

Directed by Neasa Hardiman, Sea Fever revolves around Siobhán, "a marine biology student (Hermione Corfield) who prefers spending her days alone in a lab," according to the official synopsis. "She has to endure a week on a ragged fishing trawler, where she's miserably at odds with the close-knit crew."

I'm pausing the synopsis at this point to note that we all may have even greater empathy nowadays, since many of us are, well, stuck at home. Anyway, back to the sea:

"But out in the deep Atlantic, an unfathomable life form ensnares the boat. When members of the crew succumb to a strange infection, Siobhán must overcome her alienation and anxiety to win the crew's trust, before everyone is lost.

Last fall, Sea Fever embarked on a successful festival run (Toronto, Fantastic Fest, and more) and our own Jaime Grijalba Gomez saw it in connection with the Brooklyn Horror Film Festival. In his review, which you can read in its entirety here, he comments:

"The parasite infection remains mostly mysterious, and at times even invisible (and unbelievable) for a long time, thus turning to the acting abilities of the cast to both tense things up and advance the plot. I'd particularly like to single out Connie Nielsen, who plays Freya, the owner of the boat, who is both defensive of her property, and at the same time caring about those around her, but without any sweet attitude, just roughly moving forward and taking things her own manner, through the experience of years behind a boat."

Sea Fever is heading directly to home video next week. To celebrate, distributor Gunpowder & Sky, through its sci-fi label DUST, "will bring audiences the ultimate at-home experience to be the first to participate in the live stream premiere," according to an official release.

"The live stream event will take place on https://seafever.watchdust.com on Thursday, April 9 at 5pm PT / 8pm ET. * For a small pay-per-view fee, fans can tune in to watch the official film premiere together, post their comments in a chatroom, and have their questions answered by the cast and crew via a moderated Q&A following the credits. The event will kick-off Sea Fever On Demand and Digital release on April 10."

* Updated to reflect correct time. After all, you wouldn't want to be late.

So, you are welcome to join in the event next week. Black tie and/or evening gown: optional.