Science saves the day in a bright anime series, set in the distant future. 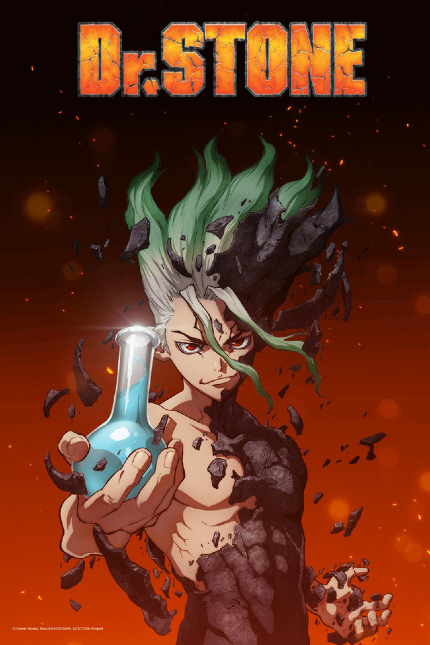 The kids are (mostly) alright.

Dr. Stone
Now streaming weekly in Japanese with English subtitles on Crunchyroll and VRV, and in an English-dubbed version on Funimation . The show also recently began showing on basic cable via Adult Swim.

In a different light, he might resemble David Lynch's Eraserhead.

Based on a manga series written by Inagaki Riichiro and illustrated by Boichi, first published in 2017, and adapted for television by TMS Entertainment, Dr. Stone is set in the distant future, some 3,700 years after every human being on Earth was petrified into stone by a mysterious force that left everyone conscious, though utterly unable to move.

Senku is the first to break out of his petrified condition. In high school, he was a brilliant student and an ardent lover of all things scientific, and so he immediately sets about applying science to a brand new, somewhat familiar, primitive world where technology does not exist.

Among his endeavors, Senku develops a fluid that can dissolve the stone and applies it first to his best friend from high school, Taiju. He is an incredibly strong, if somewhat dim, young man whose brawn and tireless work ethic will be helpful to Senku. Taiju is grateful and resolves to do anything he can to help his friend, but first he wants to revive his longtime crush Yuzuriha.

Next on his list, however, Senku revives Tsukasa, a natural hunter who is even stronger than Senku and has a primitive mean streak that is soon manifested, leading to existential threats about the future of mankind. Beyond this initial trio, new characters emerge, posing new challenges for the ever-changing status quo.

A simulcast of the show streams in the U.S. on Friday evening and I've been delighting in its inventions and humor since it debuted in early July 2019. Dr. Stone is an eternally optimistic fellow, and so are Taiju and Yuzuriha. In recent episodes, Dr. Stone has forged a path on his own, and his optimism is infectious, reflecting his heartfelt belief that science can solve any problem that may arise in life, in this world or the next. The humor skews toward the juvenile at times, which is an interesting mix with the scientific approach to problems, as well as clever asides that are delivered archly by Dr. Stone.

The series will run for 24 episodes; ten have been broadcast as of this date. In Japan, it airs on Tokyo MX.

Summing up: Above all, Dr. Stone is a bright and funny show that continually emphasizes the advantages of science and its leading character's sheer brilliance and thinking ability.