Now Streaming: BEM, Monsters Among Us 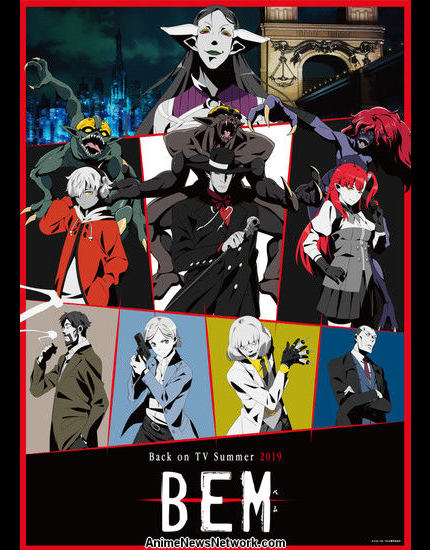 BEM
Japanese simulcasts now streaming in the U.S. every Monday via Funimation and Hulu.

Looking around at the wreckage of modern civilization, why would anyone want to be human?

Survival, for one thing. Bem (voiced by Konishi Katsuyuki), Bela (voiced by M.A.O.), and Belo (voiced by Ono Kensho) are supernatural creatures who arrive in a large city where things look pretty dire. True monsters are running amuck, and so the heroic trio are motivated to help out the underpowered humans. The three sad heroes have taken bodies so they can pass for human, but they can also uncoil and reveal their native form as needed and/or threatened. They yearn to become human in the fullest sense of the word, accepted by the native population and recognized for the good they wish to accomplish.

Created in 1968, the original animated 26-episode series was followed by a second series in 2006, a live-action television adaptation in 2011, and a live-action film in 2012.

The newest version premiered in July 2019. The first episode sets up the series through the eyes of Sonia Summers (voiced by Uchida Maaya), a police detective with a vibrant sense of justice and obvious disgust with corruption in the city. As a reward, she has been demoted (?!) and warned to comply with orders by her supervisors or face dismissal. Naturally, she kicks back against her superiors.

Through six episodes so far, the series is a deft mixture of action and drama. While Sonia valiantly fights the power, the heroic trio are misunderstood and maligned by authorities and populace alike. Painted with a broad brush as a threat to their authority, corrupt officials want these "humanoid monsters" eliminated, along with the rest of the monsters.

Undercurrents of discrimination against all aliens and, really, all who are considered to be "others" are strong, but this is primarily an action show. The differing aims of the putative heroes are manifest and add meaning to the blitzkrieg of violence that flows steadily through each episode.

Summing up: Harshly poignant and eminently watchable. Read more about the series at Anime News Network.