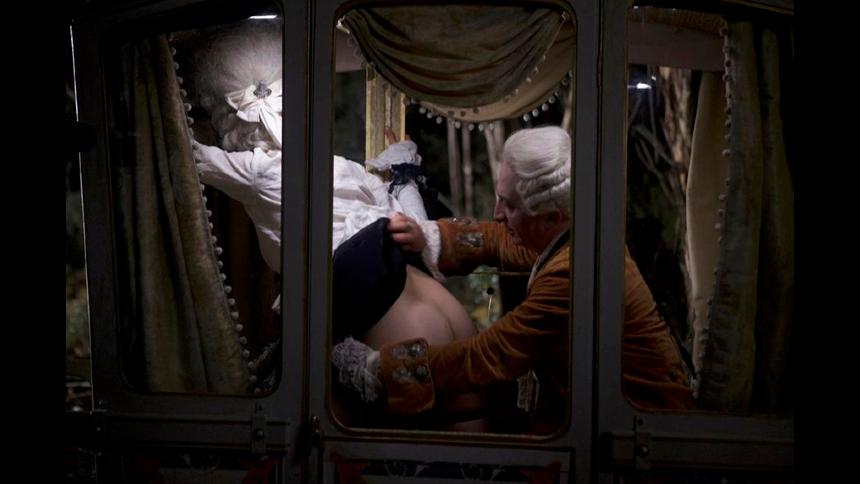 Catalan director Albert Serra has been practicing his brand powdered-wig costume dramas in cinema, art galleries and on stage (not particularly in that order) for quite some time now. First conceived as a gallery performance art, his The Death of Louis XIV and its companion piece Roi Soleil were either stroke of genius cinematic daring-dos or insufferable indulgence pieces depending on whom you ask in the cinema circle.

Then comes Liberté which started out as the stage opera first commissioned by Berlin’s Volksbühne in 2018, Serra seems to take advantage on the film medium and expound/expand his horizon of the limitless possibilities of ways in presenting the same subject. And he seems to be relishing it in this film version.

In Liberté, we are introduced to a group of French ex-patriots in the woods at night in ornate hand-drawn carriages fleeing on the eve of the revolution. They are on the run in Germany, where they hope to spread a philosophy of moral, political and sexual indulgence. They are regrouping with the help of Duc de Walchen (played by Helmut Berger of Visconti films). Slowly but surely, the group engages in voyeurism, all sorts of pan-sexual and s&m activities all night until dawn.

The film is intentionally minimally lit. It's in the woods, there are trees and leaves everywhere to obscure the views. And it's criminally dark. If grandiose and ornate production design and suggestive nature were the point of his stage version of Liberté, It’s the darkness and restraint from showing too much is the point in his film version. Yet the film is still filled with graphic sexual imagery.

It slowly starts with these libertines lurking and spying on each other in underbrush. Placid penises appear here and there. Mind you, these are not the most attractive people. What we can make out, many of them are hideously overweight, deformed and amputated. They whisper to each other some of the most pornographic scenes imaginable.

But these repetitive and prolonged sequences reminded me of the effects of repeated sex scene in Cronenberg’s Crash. You don’t see the eroticism anymore after a while. You become numb. Like most of Serra’s work, there is a hint of parody in these shenanigans.  I mean, it’s actors in wigs stroking themselves in the woods in a movie called ‘freedom’. I think with Liberté, Serra reached the new height in his formalist approach to costume dramas. He is an artist who will run amok with his approach when given a chance and Liberté is probably the best example. I do like the playfulness in his method when it comes to parody when seeing the past with irony. Liberté goes on a little too long but it’s still a fascinating ride.

Do you feel this content is inappropriate or infringes upon your rights? Click here to report it, or see our DMCA policy.
Albert SerraFranceHelmut BergerNew York Film Festival 2019