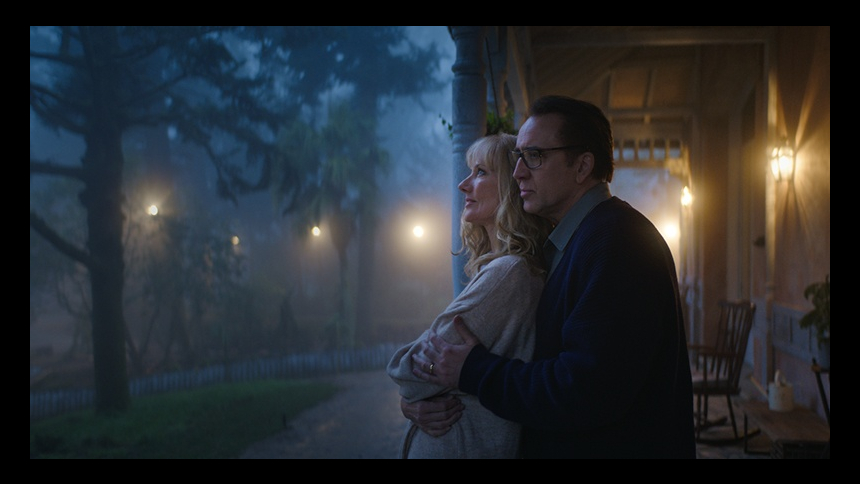 The dramatic, fantastical tale plays out spectacularly on the big screen.

Color Out of Space
The film enjoys its U.S. premiere at Fantastic Fest in Austin, Texas.

Born in South Africa, Richard Stanley shot to attention with his kinetic feature debut, Hardware (1990), which featured a marvelous command of the gritty and the gloriously grotty as an android goes violently berserk in a tiny space. Within the straightforward confines of the story, Stanley raised questions that had not often been raised in the realm of science-fiction films, while still offering a harrowing experience.

Launching further away from a straightforward narrative, Dust Devil (1992) showcased Stanley's visual imagination, a swirling, thoughtful kaleidoscope of images that invited viewers to imagine a whole new world. After several viewings, I am still not quite positive what the film is about, per se, but it's happily lodged into my memory banks as a distinctive work of entertainment.

Five years ago, David Gregory's documentary Lost Soul: The Doomed Journey of Richard Stanley's Island of Dr. Moreau provided insight into Stanley's efforts to make a fresh new adaptation of a classic H.G. Wells story in the 1990s. (See the fabulous review by my colleague James Marsh.) After his Island experience, Stanley continued making films, both documentaries and shorts, of which my favorite may be his visually striking segment of the anthology The Theater Bizarre (2011).

Now Richard Stanley has completed Color Out of Space, his feature film adaptation of a memorably haunting story by H.P. Lovecraft (originally titled The Colour Out of Space), written in 1927. Lovecraft's story looked back at the "strange days" that followed a meteorite crash in 1880s Massachusetts, especially what happened to a hard-working farmer, his family, and their land, largely from the perspective of a bewildered friend and neighbor.

The story has served as the basis for four previous films: Die, Monster, Die! (1965), The Curse (1987), Colour From the Dark (2008), and Die Farbe (The Color) (2010). Other films, such as Annihilation (2018) strongly reflect its influence, while Stephen King has acknowledged that his novel The Tommyknockers was also strongly influenced by the story.

The film version moves the action to a farm owned by Nathan Gardner (Nicolas Cage) and his online-broker wife Theresa (Joely Richardson) in the modern day. They and their children are still adjusting to a fairly recent move from a big city to rural Massachusetts, where they are raising alpacas. Nathan and Theresa believe they are achieving their dreams. After a meteorite lands on their property, however, they must come to grips with unfolding fears and unexpected nightmares.

I first met Richard Stanley at Fantastic Fest in 2014 and then spent a little more time with him while attending the Morbido Film Festival in Mexico the following month. He's a gentle, thoughtful man with a vivid imagination, and, as Color demonstrates, he is still probing the outer limits. After an advance screening of his latest work on the big screen, we spoke briefly; no spoilers below!

What's your favorite farm animal? [Yes, this relates directly to the premise.]

Ooh, that's a sticky one. I have to say, I'm very much in love with those alpacas [which play a supporting role on the farm]. It was either them or ostriches. ... It would have been in keeping with the Gardner family to raise ostriches. They kick like crazy and they're a lot more dangerous than alpacas to have around a film crew, so on Color we plumped on alpacas.

Who's your favorite Superman actor? [Also relates directly to a scene in the movie involving the farmer, played by Nicolas Cage, who was touted to play the character in a live-action adaptation.]

That's a toughie, sir. Okay, well, I guess it's going to have to be Christopher Reeve.

And that's all for now. We explored things in greater depth in a conversation that will be published closer to the theatrical release.

Color Out of Space is an absolutely magnificent adaptation that pays all due respect to Lovecraft and his thematic concerns, as well as Stanley and his interests in how loving families can be affected so deeply by events that are beyond their control. It's a must-see on the big screen, so plan ahead accordingly.