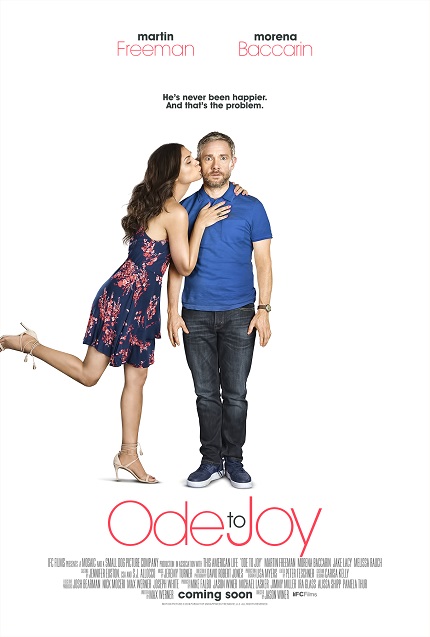 Jason Winer’s Ode to Joy has a typical romantic comedy setup: man meets woman, they fall in love, a complication arises to drive them apart, they ultimately reconcile, cue happy ending. Only this time the obstacle to true love isn’t the usual harpy girlfriend or asshole boyfriend who are obviously wrong for the leads, but an actual sickness.

Charlie (Martin Freeman) suffers from cataplexy, a symptom of narcolepsy that causes him muscle weakness and paralysis whenever he experiences strong emotions, such as joy. It basically means that Charlie has a perpetual black cloud over his head, since he can’t even look at a cute dog in the street without falling over himself. His self-made boring life takes a turn when he meets and falls for Francesca (Morena Baccarin), a woman with her own set of issues who wears her emotions on her sleeve; you can pretty much guess what happens from there.

In any other comedy, Charlie’s condition would be a mere excuse for demeaning pratfalls and silly slapstick but Winer and screenwriter Max Werner largely avoid that trap; the disease is treated in a realistic manner as a true complication in a relationship. This film deals with serious medical conditions and Winer doesn’t cheapen them for laughs; still, setting a feel-good romantic scene amidst chemotherapy patients could be considered borderline bad taste.

Any romantic comedy needs chemistry between the leads to work and thankfully it's present in spades. It’s a sweet, natural relationship, made believable by its two leads; Baccarin is an absolute charmer and Freeman, who at first plays Charlie as an (understandably) crotchety Scrooge type, eventually loosens up and carries himself well as a romantic leading man, yet another diverse role in a career full of them.

The comedic heavy lifting is left to the supporting players (also a prerequisite for romcoms): Jake Lacy is hilarious as the meathead brother who Charlie sets up with Francesca just to keep her close, which briefly creates a Cyrano-type situation; but the real scene-stealer is The Big Bang Theory’s Melissa Rauch as a woman Charlie dates who speaks in monotone and has a thing for fabrics; her unique rendition of a beloved 90s alt-rock staple is a side-splitting highlight. Veteran comedic actress Jane Curtin is also on hand but sadly underused as Francesca’s cancer-stricken aunt, whose main purpose is to be sarcastic and dispense life advice.

Ode to Joy doesn’t reinvent the romcom wheel, but it’s not even trying to. It’s a well-meaning, slight and amusing love story carried by the charisma of its two leads (with an assist from their supporting cast), who make up an unexpectedly charming couple. Cataplexy may be a real and complicated condition, but here, it’s not an obstacle to happiness.

Ode to Joy arrives in theaters and On Demand/Digital on Friday, 9 August.