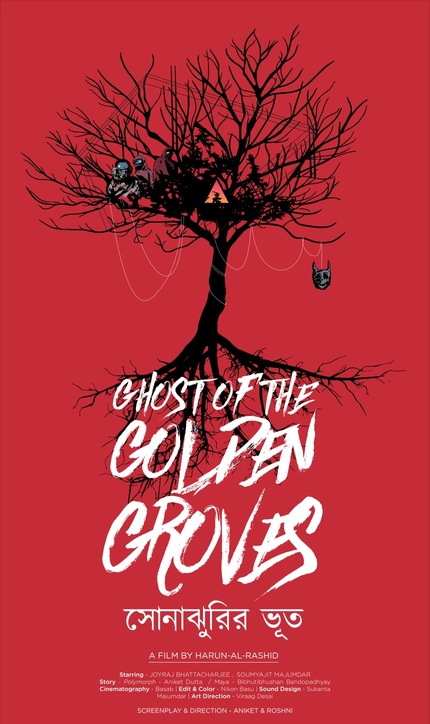 An avant garde ditych set in the jungles of West Bengal, Ghost of the Golden Groves is a trippy Indian sci-fi fantasy sure to engage more adventurous viewers. Made in two parts by directors Roshni Sen and Aniket Dutta, known collectively as Harun-Al-Rashid, the film follows the stories of two very different journeymen going about their work in the remote Shonajhuri forest who encounter fantastical and troubling adventures beyond their wildest nightmares.

In the first story, written by Dutta, Promotho (Joyraj Bhattacharjee) is a milquetoast surveyor sent into the Shonajhuri forest to make plans for roads to connect the interior villages with the outside world. When he arrives is is surprised to find a world of dark mystery and ritualistic folk traditions that challenge his own views of reality. When he's invited to a local late night ritual in which the villagers seem to be prepraing for some kind of sacrifice, he runs and finds himself trapped in an alternate world he cannot escape.

Sen's follow-up also follows a wanderer, this time a cook looking for work who stumbles upon an old man who hires him to join him at his estate. Bhibuti (Soumyajit Majumdar) at first loves his new surroundings, and the man of the house who gives him free reign. However, when his master goes back to Kolkata and leaves Bhibuti to watch over the property alone, strange things begin to happen, or perhaps these flights of fancy are all in his mind. Bhibuti's colorless surroundings are replaced by huge bursts of color and faceless, featureless beings who seem to exist in their own reality. Soon Bhibuti finds himself falling in with these otherworldy occupants, perhaps never to leave.

Shot in exacting monochrome for the most part, the first thing that pops out about Ghost of the Golden Groves is the black and white photography. The film is all about contrasts, between city and rurual living, reality and fantasy, and this imagery drives home that point very well. The film's look brings to mind the great history of Bengali art film going back decades, from the universally acclaimed work of Ray and Ghatak, to Haru-Al-Rashid's more recent contemporaries like Q. In fact, it was Q's Tasher Desh, an adaptation of Rabindranath Tagore's work, that was at the forefront of my mind when watching Ghost of the Golden Groves. Both films take an avant garde approach to their execution, and the final segment of Golden Groves is very much in line with the fantastical elements of Tasher Desh.

Ghost of the Golden Groves is a challenging watch, for sure. The pacing is a bit slow and the material is quite obtuse for the most part, making mainstream breakthrough a tough road. However, film fans who like to be challenged will find plenty to dissect and enjoy. Reminiscent of not only Tasher Desh, but also Q's breakout feature Gandu in terms of execution, and more recently Ashim (Miss Lovely) Ahluwalia's segment of international horror anthology The Field Guide To Evil, Ghost of the Golden Groves deserves an audience willing to engage with its mysteries, and I hope it finds one.

More about Ghost of the Golden Groves