Montreal Nouveau 2019: The Trailer For GHOST OF THE GOLDEN GROVES Only Hints At The Madness Within 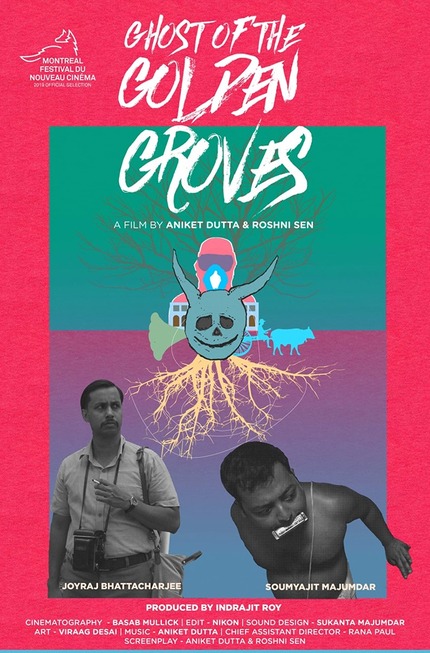 With its North American premiere at Montreal's Festival du nouveau cinéma just a few days away on October 16th, the filmmakers at Cutting Chai Entertainment have given us the opportunity to share the trailer for their avant-garde horror story, Ghost of the Golden Groves. A film in two parts, written and directored by Roshni Sen and Aniket Dutta, known collectively as Harun-Al-Rashid, Ghost had its world premiere at the London Indian Film Festival over the summer, where I reviewed it and had these thoughts:

An avant garde ditych set in the jungles of West Bengal, Ghost of the Golden Groves is a trippy Indian sci-fi fantasy sure to engage more adventurous viewers...

film fans who like to be challenged will find plenty to dissect and enjoy. Reminiscent of not only Tasher Desh, but also Q's breakout feature Gandu in terms of execution, and more recently Ashim (Miss Lovely) Ahluwalia's segment of international horror anthology The Field Guide To Evil, Ghost of the Golden Groves deserves an audience willing to engage with its mysteries

I really enjoyed the film, and this trailer gives viewers a very solid taste of its style and tone, though it is much wilder in its full form. A tough one to succinctly summarize, the filmmakers have this to say:

Strange incidents begin to occur to Promotho, a Survey officer from Kolkata visiting the 'Shonajhuri' forest area for developing roads- inexplicable lights gliding through the forest, an anonymous voice calling out his name, the sinister wailing of a tribal woman and finally a random encounter with a polymorph, all draw him deep into the treacherous web of the golden groves.

In comes Bibhuti, a poor cook from a distant village who lands a caretaker's job at an abandoned house in the same forest.Two years later, Bibhuti has turned into a recluse. .. or has he? There are "others" in the house who go about their own activities but they keep him happy. So happy that he'll never leave!

A story of two protagonists who never meet - at least not in the dimension we're aware of!

Ghost of the Golden Groves is in competition for the FIPRESCI award at FNC and screens twice at the festival:

Ghost of the Golden Groves Trailer | FNC 2019 from Cutting Chai Entertainment on Vimeo.

More about Ghost of the Golden Groves