Tribeca 2019 Dispatch: A VR Slate Both Impressive and Immersive

Tribeca has long been a leader when it comes to VR exhibition (well, long is a relative term in VR). The festival has launched such notable pieces as Arden's Wake, Rainbow Crow, and Pearl. As the industry transitions out of beta and into more mature content production, the festival again featured some highly impressive triple-A titles. Here's a bit on what we enjoyed. 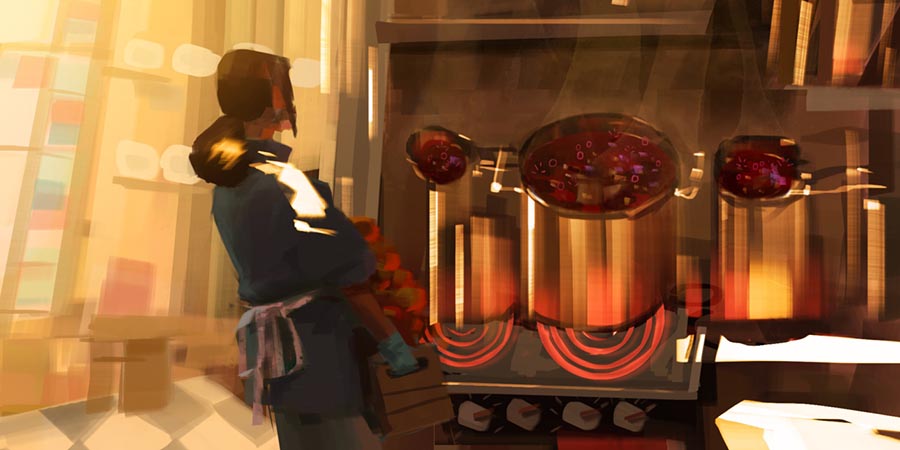 Wolves in the Wall: It's All Over
Part one of Fable's 3D-rendered 6-DoF tour de force actually premiered back at Sundance 2018. That was really more of prelude and the first bites of the story are recreated here in this much longer and much more satisfying tale. In it you take the form of the invisible friend to 8-year-old Lucy. Lucy leads you around her hectic household with her overactive imagination taking on various forms of incredible realization. For instance, when Lucy spots her father practicing his tuba, you first see him on the stage of an enormous concert hall. As the view is continually organically obscured, he reappears on successively smaller stages. A smaller concert, then a practice studio, until eventually you realize her father is actually playing in the family's cramped basement. This is just a small taste of innovative techniques that unfold in Pete Billington, Jessica Yaffa Shamash, and Edward Saatchi's piece. We reported a few months back that Fable is pivoting towards a focus on "virtual beings." While Lucy surely shows promise for this kind of future, Wolves makes it abundantly clear that with awesome storytelling and beautiful artwork, good ol' fashioned VR narratives still have a hell of a present. 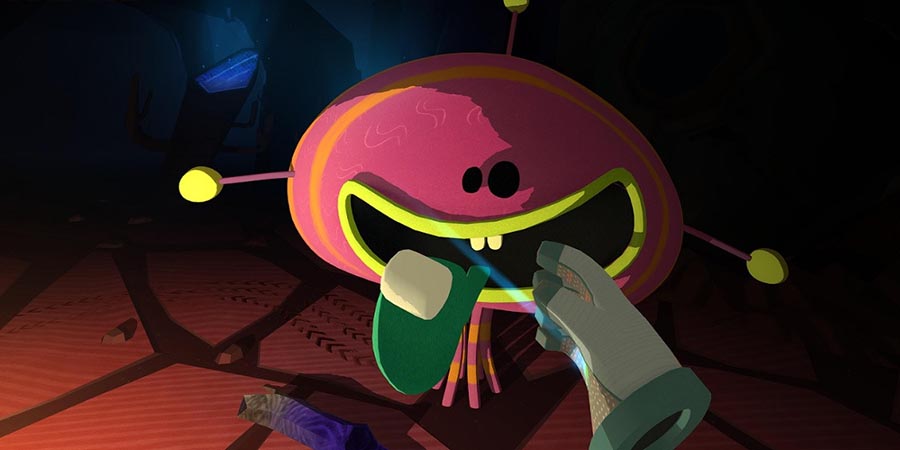 Bonfire
A big innovator from the start in the interactive VR narrative space, Baobab is back at Tribeca with another absolutely top-notch experience. Directed by director-in-chief (I made that up) Eric Darnell and executive produced by Baobab brass Maureen Fan, Kane Lee, and Larry Cutler, Bonfire is unmistakable as a Baobab joint. It features beautifully rendered and ridiculously cute characters, integrates its interactive and narrative elements flawlessly, and features a comedic storyline about space travel. The experience has you embody said space traveler after crash landing on a mysterious planet. Luckily you've got a bonfire to keep you warm and an energy module-dispensing robot (that look suspiciously like marshmallows) to keep you entertained and well fed. But what are the chances you are alone on this planet? It's hard to find anything negative to say about this experience that also features the voice talents of Ali Wong. Download it, blast off, and enjoy. 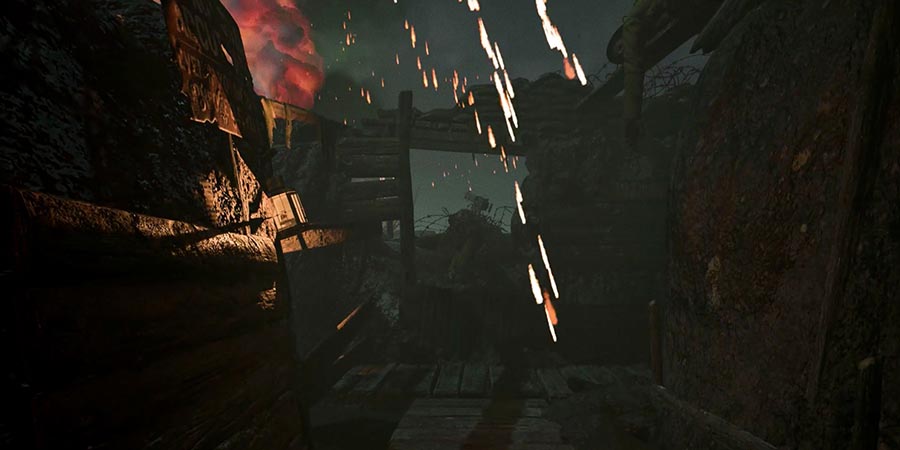 War Remains
There have been a fair few "experience war" VR pieces over the years -- a number even based on World War I (see Nothing to be Written just a month ago at SXSW). Without a doubt, MWM Immersive's Dan Carlin-narrated War Remains is the most impressive VR recreation of war yet. A big part of this is due to the incredible custom location-based experience. Floor boards rumble and speakers boom around you as you traverse the digital trenches of the Great War's Western Front. Real doors beg to be opened and actual barbed wire (slightly dulled down) requires avoiding while Dan Carlin (who you may know from his insanely popular Hardcore History podcast) tells the tales of what made this war so extreme. It's a match made in Heaven (Hell?) and if we're lucky, points towards more great historical adventures to come. 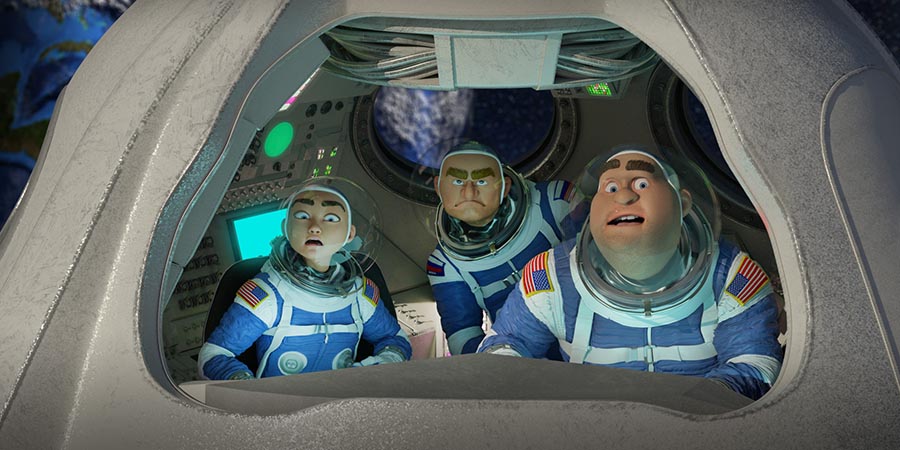 Space Buddies
Delighting audiences 40 people at a time in the Cinema360 program, Space Buddies is another comedic animated 360 experience from the folks at Shadow Machine. Directed by Ethan Shaftel who is responsible for the company's Sundance-premiering Kaiju Confidential as well as his own hilarious Extravaganza which premiered back at Tribeca 2017, the obviously busy dude is quickly becoming a top comedy director in the animated VR space. Here we find ourselves voyeuristically watching on as three comically unprepared (and very well animated) astronauts prepare for liftoff. It's another giggle fest. 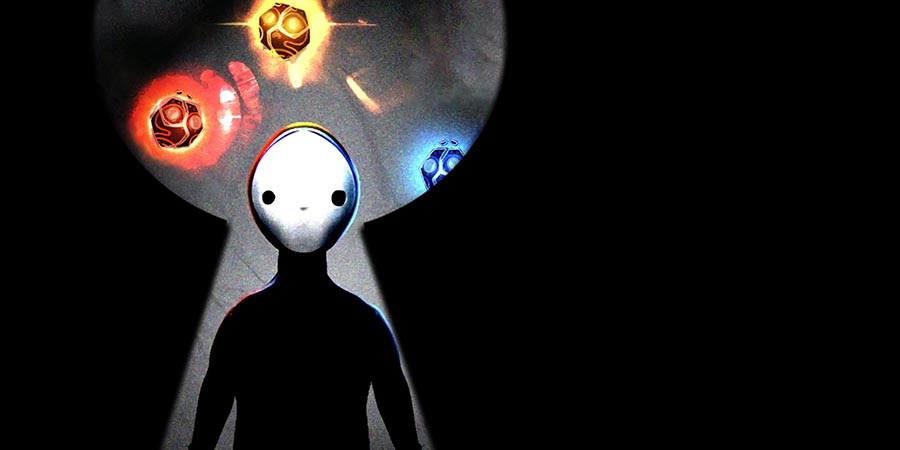 The Key
So far, Oculus's VR For Good initiative has focused on short subject documentary projects that tend to be relatively straightforward captured 360 video. This latest project from the mind of Celine Tricart is pretty different. In it you embody a masked figure in a bizarre sky world. You have three companions that take the form of flying orbs. Each companion provides a different color to your world and when one turns off, that color is lost. A sad story evolves from there and it turns out it's all an analogy for the refugee experience -- but the journey there is super weird and pretty amazing. It's a bit cloudy how it all connects but the journey is definitely worth taking. 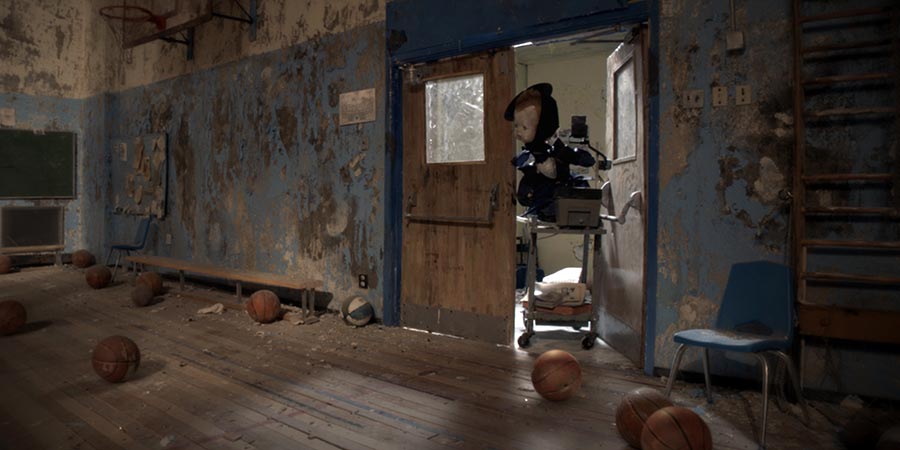 Gymnasia
360 video pioneers Felix & Paul's latest foray is this creepy exploration of the "ghostly ephemera of a lost childhood." It's a pretty short tour of a broken down school but the production design and spatial audio are totally awesome. 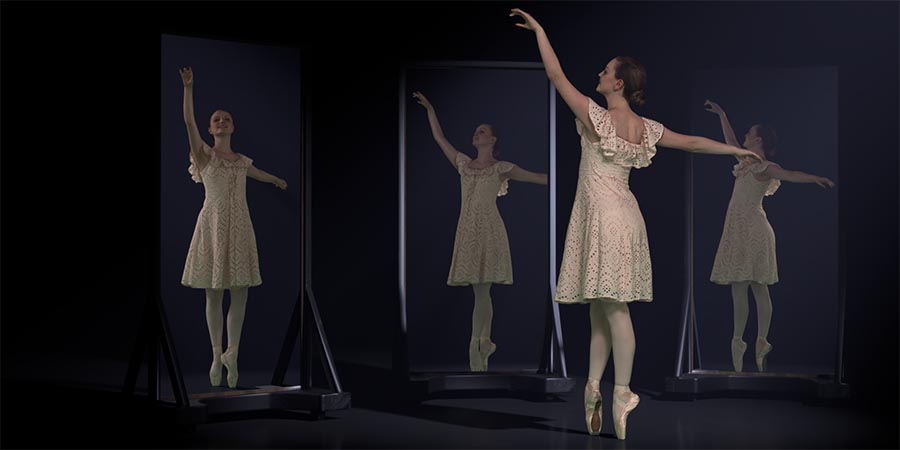 The 100%
Step into a beautifully rendered dance studio in Hernan Barangan and Springbok Entertainment's tale of a ballerina's fight with cancer. Maggie Kudirka was captured (along with others) using volumetric capture and the result is the most impressive use of this cutting edge technology that has been deployed yet. It's also a well told story and effective exploration of a tough subject. 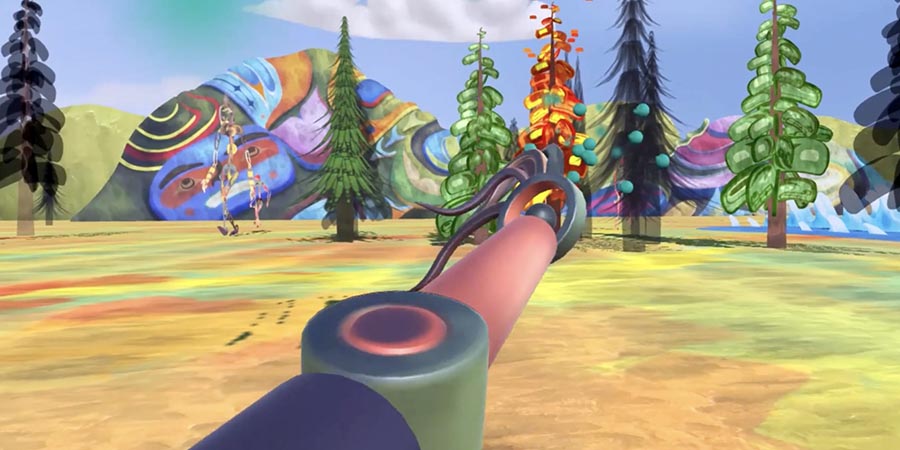 Unceded Territories
Indigenous artist Lawrence Paul Yuxweluptun teamed up with Paisley Smith for this fun, weird, and totally gorgeous 3D rendered experience. The experience pits a destructive "super predator" versus the environment. But the star of the show is the colorful "ovoidism" design that evokes indigenous Pacific art. 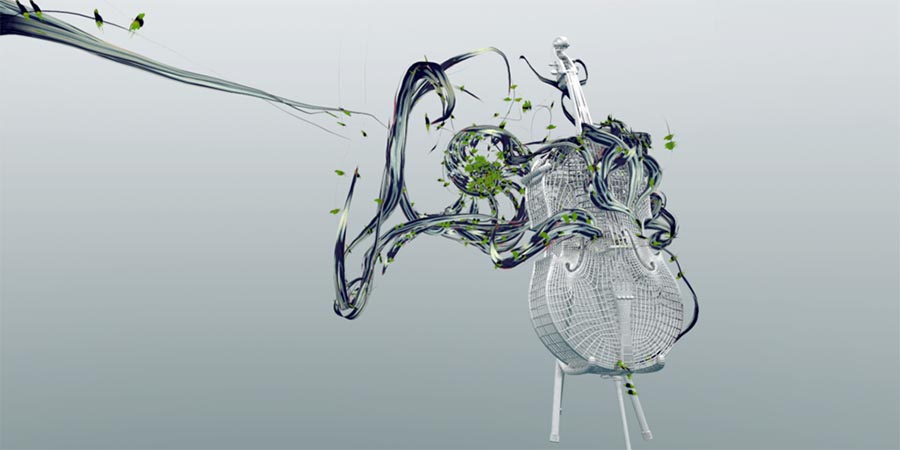 Into the Light
Jessica Brillhart and Igal Nassima collaborated with Yo-Yo Ma for this site-specific AR audio experience that shows you cool visuals on your phone while you listen to Bach's "Unaccompanied Cello Suite No. 2 in D Minor" (and everyone stares at you wondering what you're doing). 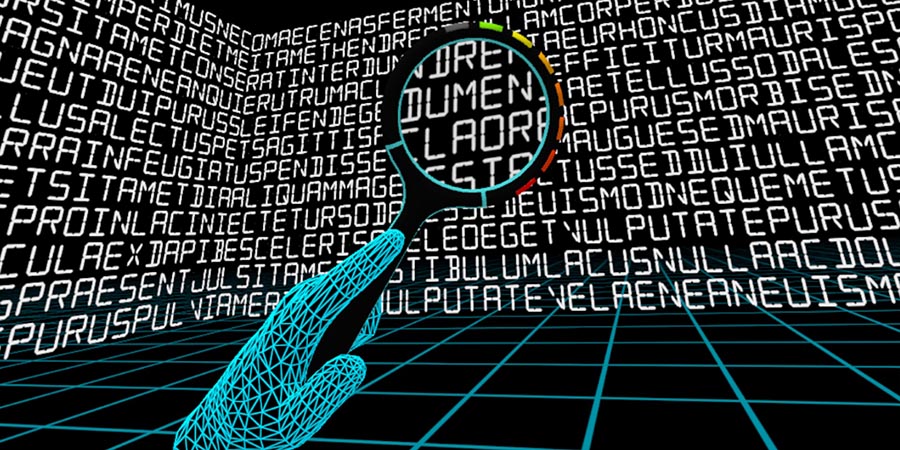 Traitor
More of an escape room that uses VR than a full blown VR experience, Pilot Theatre's interactive experience asks you piece together the clues to a missing agent. The live actors do well but if you've ever done something similar, the addition of VR won't change your impression that much. 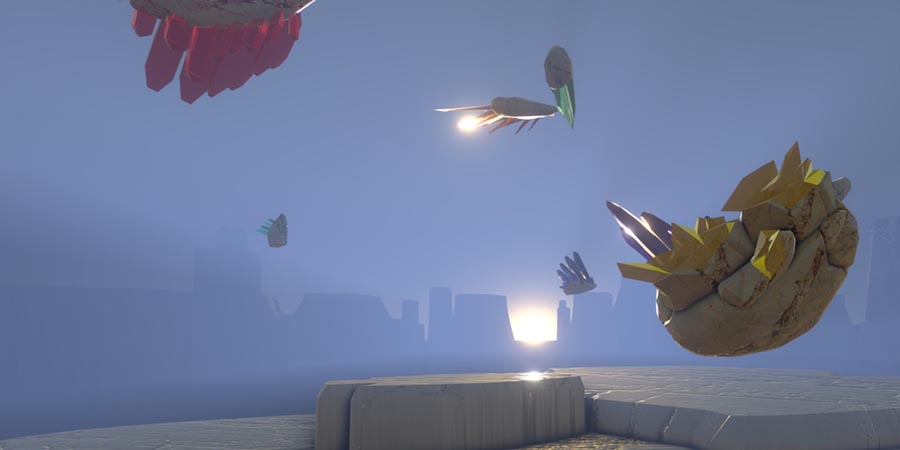 Armonia
Hang out with some weird gemstone rock bird creatures as they dance around during a piano concerto (a "concerto video" of sorts?) in this piece by Bracey Smith and Anja Moreno-Smith. It's pretty out there but also pretty. 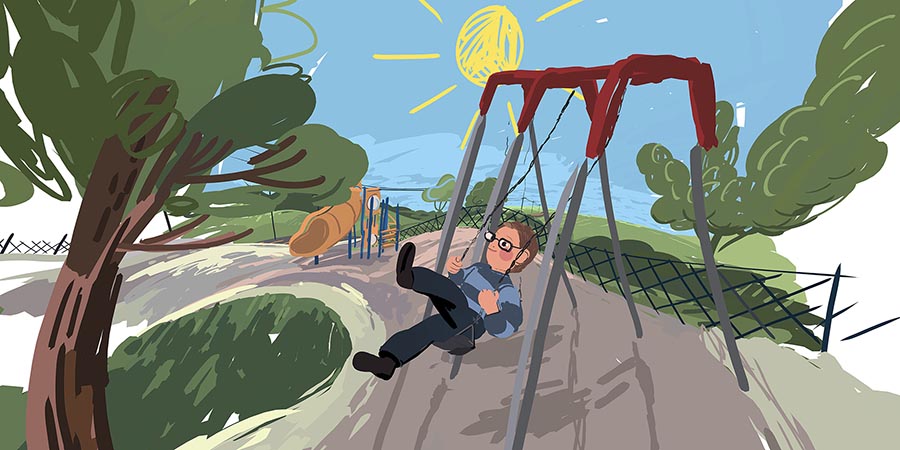 12 Seconds of Gunfire: The True Story of a School Shooting
This piece made in conjunction with the Washington Post explores the subject of one school shooting via Oculus Quill animation by the same artist as Dear Angelica, Wesley Allsbrook. 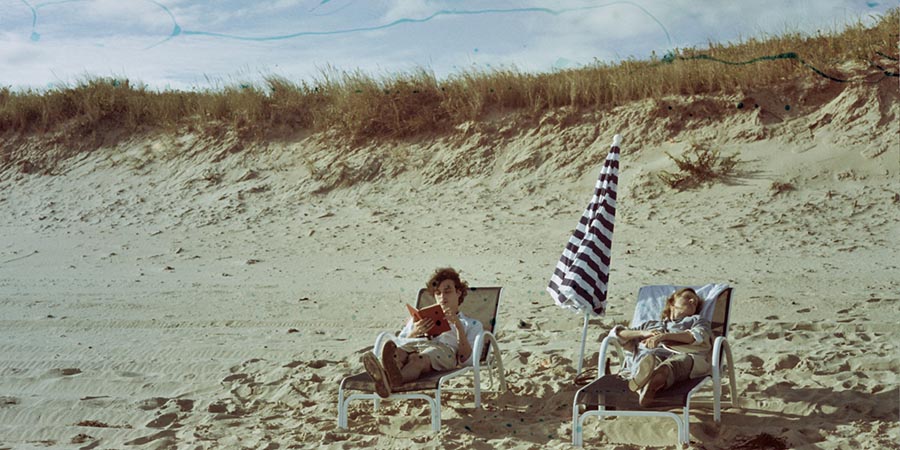 Water Melts
Lilian Mehrel, Mary Evangelista, and Ting Liu's piece explores loss through the medium of 360 video with the addition of a bit of animation. 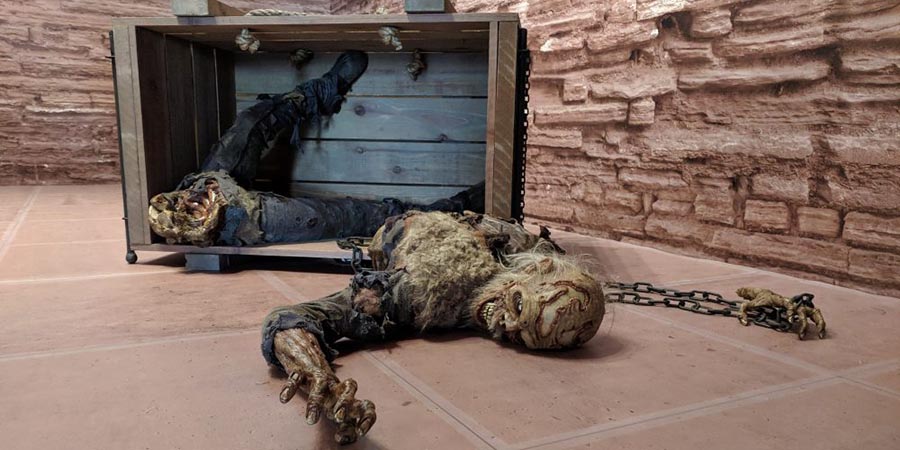 Dead Must Die
This Magic Leap AR experience was set up as a commercial activation at Tribeca between AT&T and HBO but it's worth mentioning because of the subject matter and tech. Slip on the much-ballyhooed Magic Leap goggles and approach some boxes and bang! Next thing you know there is a white walker from Game of Thrones coming after you. It's pretty cool but I can report I was not afraid for my life.